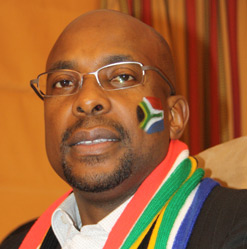 If you’re one of those South Africans who proudly flew the national flag from your car or house during the 2010 Fifa World Cup, and wore a scarf, beanie or football jersey with a local flavour, keep it up – and encourage others to do the same.

This is the message from Miller Matola, CEO of the International Marketing Council (IMC) of South Africa, the institution tasked by the Presidency to promote Brand South Africa.

Matola said the aim of the new initiative, Fly the Flag Fridays, is to harness the spirit, unity, solidarity and sense of pride experienced by South Africans during the World Cup and let it invigorate our post-tournament activities and attitude.

He was speaking at the launch of the campaign on Friday 16 July 2010 at the Primedia studios in Sandton, Johannesburg. Face-painters and African drummers were on hand at this event to paint mini flags on employees’ faces and set the rhythm for the day.

Fly the Flag Fridays is a “continuation of campaigns started in the run-up to the World Cup, like Football Fridays, which inspired the nation and built spirit. Let’s keep the momentum going,” Matola said.

It will be celebrated every Friday from now on, he said, and can take many forms. It can be interpreted literally by simply flying the flag, or be observed by buying South African-produced goods, wearing any of the national colours, supporting South African sports teams and music, or getting involved in a good cause.

“We want to encourage people to engage in any activity that reflects the South African spirit of ubuntu, which is ‘You exist because I exist.’ It should be something that can be useful for the nation,” Matola added.

“The idea of Fly the Flag Fridays belongs to all South Africans. Let’s show the world we’re a hospitable nation and that ubuntu is one of our hallmarks.”

What we can take from the World Cup

The World Cup helped to rebrand the nation and dispel negative perceptions about South Africa and Africa, Matola said, while showing the world what Africans are capable of, given the chance.

By building on this, Matola believes South Africans will become more united as a nation and have greater confidence in the country’s future. It will also help keep up morale.

“Once Bafana Bafana was out of World Cup, most South Africans still rallied around African teams and the continent. Let’s bottle this and put it to good use – put it towards initiatives that drive social cohesion,” he said.

“The small steps we start with will lead to huge leaps that will have a positive impact on the nation. With this campaign going, we can light up a fire.

“The can-do attitude of South Africans shown during the World Cup should now apply everywhere, even to social development and service delivery. There should also be a sense of pride shown in new facilities. Keeping your area clean is part of showing that pride,” Matola said.

Although there are listed ways of bringing the concept to life, South Africans are encouraged to get creative and come up with their own ideas of how to celebrate Fly the Flag Fridays.

“People are doing that already – it shows that the greater majority is ready to take up the campaign,” he said.

“By continuing to stand together, there is nothing we cannot do. As our visitors go home, let us remind them to keep coming back to South Africa because we are a nation proud of its achievements, and a country that is open for business.”