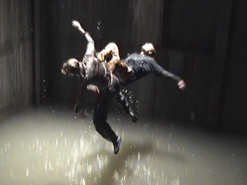 Fleur van Eeden and Ruan Burger falling
five stories down a ventilation shaft in The
Flood. 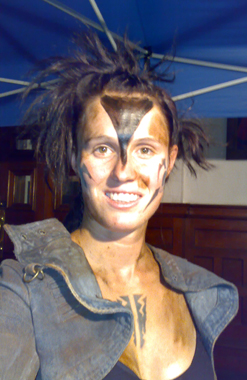 Van Eeden on the set of Doomsday. 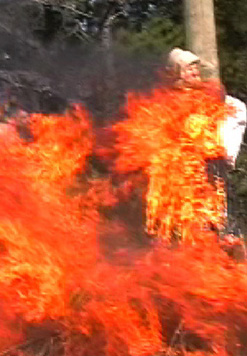 Not much fun: Van Eeden being burned at
the stake as a witch in The Devil’s Whore.
(Images courtesy Fleur van Eeden) Taking on someone a lot bigger on the set
of Doomsday.
(Image: Greg King)

Fighting on top of a moving train, battling huge futuristic armoured warriors, falling off buildings and getting burned at the stake – it’s all in a day’s work for South African stuntwoman Fleur van Eeden.

When she left school in 2002, Van Eeden did the sensible thing and studied public relations. But she was far more interested in her part-time job as a river guide, taking people on scenic adventures on the Breede and Orange Rivers.

Van Eeden grew up in the small country town of Swellendam, some 230 kilometres from Cape Town. There she was always outdoors and always active – mountain biking, paddling, horse riding or running. She was never good at sitting still. So there was no looking back when a fellow river guide introduced her to his brother, Franz Spilhaus – one of the partners in Pyranha Stunts.

She sent him a CV and photos and, as luck would have it, she looked exactly like one of the actresses on The Triangle, a US miniseries being filmed in Cape Town. She was asked to double for her on a relatively simple stunt – being a passenger on an inflatable boat, but with some spectacular water sequences. That was a breeze so, on the same movie, she was asked if she’d like to do plane crash scene. Ever game, she said yes.

“I didn’t know what to expect,” she says. “We were in this plane – a fake plane – and they tied a cable round me, and then there was someone on the outside attached to the same cable. He jumped, and I was pulled up to the top of the plane.”

Her stillborn career in public relations forgotten, Van Eeden divided her time between river guiding and stunts, but the stunts soon took over.

Six movies in a year

Cape Town is the perfect place for a budding stuntwoman to be. The city has become South Africa’s version of Hollywood, with its varied and beautiful locations, favourable exchange rate and strong government support making it a favourite among international filmmakers.

“After The Triangle, I didn’t hear from Pyranha for quite a while,” says Van Eeden. “Then, suddenly, I did a commercial, and then did six movies in one year.”

These were Primeval, The Flood, Rainbow Warriors, The Bird Can’t Fly, Bible Code (a German movie) and Drona (a Bollywood movie).

By international standards, Van Eeden considers herself to have broken in to the field.

“I had no training, so I was really lucky,” she says. “For example, in the UK, you can’t even get onto the books unless you have lots of qualifications.

“So, once I started, I started to train. Because I’m a girl, I get lots of chances and training. Before a movie, say I look like the actress, they’ll take me for two months and train me.

“Like Doomsday. I’m not a fighter, so they trained me to fight. “

As a stunt double her job is to make the actress look good, but she doesn’t necessarily look that good while doing it.

“Sometimes you look great, and other times you look awful. In Doomsday, they cut my hair short with these two long bits in the front, and dyed it black. So I walked around for five months with this weird hairstyle.

“In Droma, the main actress was this beautiful Indian woman, so I wore this long black wig and they painted my face dark. I was in make-up every day for three weeks and, after a while, it didn’t come off. I looked like a raccoon.”

Feel the fear, and do it anyway

“We had to do fights on top of a train while it was moving.  They built these two towers on either side of the train, with cables running from one end to the other, and we were tied to the cables. There were about 12 of us fighting. I was the only woman.

“The last day they wanted three stunt guys to fall off the train. A lot of the stuntmen had got hurt in the fighting, so they asked me if I wanted to do it.

“I practiced it with the train static. I was really worried, not sure how my body would react when I did it at 45 kilometres and hour. That doesn’t sound fast, but it is. And then, when I jumped, I did it exactly as I had trained. It was very rewarding.”

She had a good time working on Droma.

“Working with Indian productions is the most fun things. The director will do your makeup if he has to. Everyone does everything. They’re not precious.”

Another challenging stunt was the full body burn she did for The Devil’s Whore. In this British TV series she doubled for Andrea Riseborough, who played the unfortunate Angelica Fanshawe, who comes to a rather fiery end.

The series is set in the 17th century, during the English Civil War. When the producers were criticised for choosing to shoot in South Africa, they countered that they had been unable to find suitably “old English” locations in England.

Being burned at the stake is no mean feat, Van Eeden says.

“It’s the one stunt you have to do. But if something went wrong, it would be major.”

As it turned out, the preparation was worse than the burning.

“They painted me,” she says. “They cover your whole body with gel – straight from a freezer – and then two layers of special clothing.

“It’s a layer of water gel, then a layer of gel-impregnated clothing, then more gel, then an overall. And then your wardrobe on top of that.  With the special gel, you get so cold. And then suddenly this heat. They have to have a paramedic standing by in case you get hypothermia.

“And then the actual burn, they explain you should preferably not breathe – it’s only 10 seconds. But if you have to, you must just take a tiny breath. If you gasp in air, you can burn your lungs.

“First you practice it and then, on the day we did it five times. So I burned five times.

“You know what’s weird – you really get into the whole thing. There I was tied to the stake. (I wasn’t really tied, of course.)  And everyone was shouting, ‘Burn the witch, burn the witch!’”

Sometimes she will just get called on to do a single stunt for a movie but, often, as a stunt double, she’ll be involved in the same movie for months.

One of these was Doomsday, a 2008 British science fiction film starring Bob Hoskins and Malcolm McDowell.

“With Doomsday, we did two months of training and then five months of filming,” she says. “We finished that up in Scotland, which was amazing.”

“You start getting involved in the character. You watch the actress, see how she moves, how she sits, and you try to be her.

“You spend months and months living in this fantasy world. You don’t even know what’s going on in the real world.

“And then, it’s a bit depressing when it all ends.”

There is always the chance that something can go wrong, and Van Eeden has had a few minor mishaps.

“I’ve got a scar on my stomach from flying glass,” she says.

“And my neck got a bit scorched when I did the full body burn, but that’s not a big deal.

“And in Primeval – this guy was holding me by the throat and burning my arm with a cigar. I had a flesh-coloured plaster on, but it slipped and he was actually burning me. But I couldn’t ruin the shot,” she says, showing a small scar on her arm. And she hurt her knee when a door fell on her in an explosion.

“But it’s not usually serious – a couple of stitches. A lot of people break collar bones.

“On Doomsday, one of the actors broke a stuntman’s nose. That’s the worse, when you have to fight against the actors, because they’re not trained.

A recent injury – from wakeboarding this time, not stunt work – has made Van Eeden slow down a bit. Unable to keep still, she started a small DVD-based TV show called SWDTV – Swellendam TV.

“It’s a monthly DVD that goes out to the community – mostly tourist stuff. Especially after my injury, I thought – what if I hurt myself again?”

So she’s making sure she can still work even with an injury.

“I’m getting more into editing.  And, a week ago, I did a winch job where I operated the winch, because of my foot. They’ve been very nice about it.

“When I don’t do stunts I rig sometimes. I have an abseil supervisor’s ticket. It’s very technical.”

Van Eeden’s back at work, doing a scuba diving scene, but she’s careful not to take on anything that may worsen her ankle injury. She seems pretty sure where she wants to go in the foreseeable future. Even though she is making sure she has something to fall back on, she can’t imagine not doing stunts. And she has no intention of heading for the bright lights.

“People ask me why I don’t go overseas. But there’s so much work here. Here, I’m a big fish in a small pond. In Scotland we worked with 12 UK stunt people, and they do one movie in a year.

“Here we do a lot more – and a lot of commercials. Maybe I’d go for a while, for experience, but I want to work in South Africa.

“And carry on living in Swellendam. If I have two days off I go home. I’ve got two horses and I mountain bike. I love it there.”

So it looks like the burgeoning South African film industry is going to have this restless young stuntwoman to call on for quite a while.