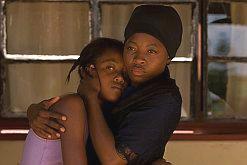 Khomotso Manyaka as Chanda and Lerato
Mvelase, who plays her mother Lillian. 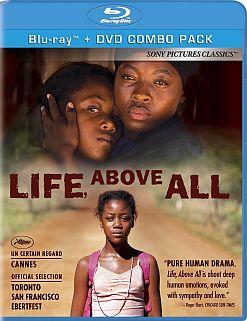 The movie is now available on DVD.
(Images: Covering Media)

The 15-year-old South African actress Khomotso Manyaka has earned a position on Time Magazine’s list of the 10 best performances of 2011.

Manyaka was lauded for her performance as the scrawny, big-eyed Chanda in Life Above All, an adaptation of the Allan Stratton novel, Chanda’s Secrets. The film focuses on the stigma surrounding HIV/Aids.

Both novel and film chronicle Chanda’s struggles with her parents’ illness because of HIV/Aids, and the stigma associated with the disease.

Manyaka was only 13 when she landed the role, and had never taken professional acting classes before. But her performance has placed her among seasoned actors like Brad Pitt, Meryl Streep and Woody Harrelson, also singled out for last year’s best performances.

Director Oliver Schmitz said: “It was a tough call, the commitment to make the film with a first-time actress. It was a leap of faith for me and for her, she having never done it before.”

Schmitz was also influenced in the decision by the chemistry between Manyaka and Lerato Mvelase, who plays her mother Lillian in the movie, during casting.

The Mpumalanga-born teenager, whose star is rising fast, has earned herself a bursary from the National School of the Arts, along with her co-star and friend Keaobaka Makanyane. Manyaka will be in Grade 10 this year.

She said: “There’s nothing lined up this year so far so I’m just concentrating on school now.”

Time describes her performance: “Khomotso Manyaka was no Hollywood moppet, just a South African girl who had never acted, when director Oliver Schmitz picked her for the lead role in this starkly poignant drama about a family, a village, and a people devastated by the Aids plague.”

The magazine said that Manyaka had played the resilient Chanda with “amazing poise, delicacy and grit”.

The movie looks at how a young girl manages to touch the lives of her community, and shows how courage and strength can overcome adversity.

The journey begins when Chanda’s baby brother dies suddenly and the community of Elandsdoorn in Mpumalanga begins to suspect this is because her mother has HIV. They begin to shun her.

As a result, Chanda’s mother leaves the dusty town. This forces her daughter, who senses that the gossip stems from prejudice and superstition, to leave school and embark on a spiritual journey to find her lost mother and put an end to the situation.

The movie is dedicated to children orphaned by the ravaging disease.

Schmitz said: “Chanda’s Secret is a very dense novel, there is a lot happening in it. But what really moved me was the mother/daughter relationship for the film version.

“There is a very complicated dynamic about a youngster that knows what is going on, but is scared to say it, and a mother who is scared to acknowledge the disease she has.”

The unspoken matters that lie between mother and daughter, said Schmitz, inspired him to make the film.

Life, Above All, which is now available on DVD, has been well received by its audiences and has turned Manyaka into a star to watch in the future.

The recognition of Manyaka’s performance by Time is not the first.

Manyaka received the award for best actress at the South African Film and Television Awards in 2011, and also walked away with the honours in the same category at the Durban International Film Festival in 2010.

The movie was shortlisted by the Academy Awards Committee in the category of Best Foreign Film in 2011.

The icing on the cake came when the film made its world premiere at the 2010 Cannes Film Festival, and the appreciative audience gave it a 10-minute standing ovation.

Schmitz said: “Walking out of the cinema, I met renowned movie critic Roger Ebert, who, as he is unable to speak, gestured his positive feelings towards the film with two thumbs up.”