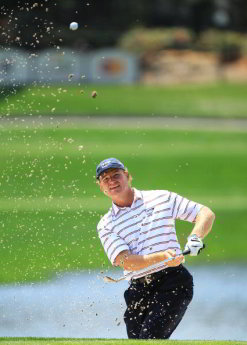 Not content with merely being a golfing
great, Els also has a golf development
foundation, a project that raises funds
for autism, a course design company
and a successful wine farm.
(Image: Ernie Els) 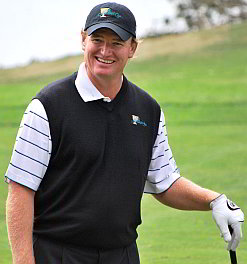 Despite his imposing height of 1.91m,
Els is known for his genial personality.
(Image: Wikimedia Commons)

South African sporting great Ernie Els was inducted into the World Golf Hall of Fame on Monday. He joins the legendary Gary Player, who entered the Hall in 1974.

The other members of the 2011 Hall of Fame class were Jock Hutchison, Doug Ford, Jumbo Ozaki, Frank Chirkinian, and former US president George Bush.

Nicknamed “The Big Easy” because of his wonderful swing, Els was elected in his first year on the ballot. That’s not surprising as he has won 62 titles so far in his career, including two US Opens and one British Open title. Much like Player, he has enjoyed success around the world.

Success around the world

Els has won 15 times on the PGA Tour, 21 times on the European Tour, 18 times on South Africa’s Sunshine Tour, and recorded eight other wins besides. He has also played in the Presidents Cup six times, represented South Africa in the Dunhill Cup in nine consecutive years, and in the World Cup five times.

He topped the European Tour’s Order of Merit in 2003 and 2004. He has also won the World Matchplay Championship a record seven times. Gary Player is tied with Seve Ballesteros for the second most wins, with five.

Long before he turned professional, Els began making his mark and his name first sprung to prominence in 1984 when he won the 1984 Junior World Golf Championship in San Diego by beating home town golfer Phil Mickelson in the final. It has indeed been a long journey.

Impact beyond the golf course

His impact, however, extends beyond his achievements on the course. South African golf is going through a purple patch at present, with Charl Schwartzel the current Masters champion and Louis Oosthuizen the British Open champion. Both of them were members of Els’ junior golf foundation, now known as the Ernie Els and Fancourt Foundation.

Oosthuizen told Helen Ross on the PGA Tour website: “If it weren’t for Ernie Es, I would not be where I am today. It’s as simple as that.

“I spent several happy years at Ernie’s foundation and whenever I wanted help since I have been out on Tour, Ernie has happily given it. I could not have found a better role model.”

Schwartzel said: “Ernie has been a great inspiration and friend to me for years. He is always happy to give his time and expertise, and I have been the grateful beneficiary of his generosity.”

It is not only the younger generation of South African golfers that appreciates what Els has done. Gary Player, too, was full of praise for him.

“I was so pleased to hear the news that Ernie has been selected to be inducted into the World Golf Hall of Fame,” he said. “Ernie certainly deserves this recognition, as he epitomises a ‘world’ golfer.

“He is a credit to the game and an ambassador for the sport. Ernie has been a wonderful friend over the years and I am very fond of him and his family.”

Apart from his excellence as a golfer and the opportunities he has created for youngsters through his foundation, Els is also striving to make a difference in the lives of people who have autism, or who are affected by it.

Duncan started with the Ernie Els Wines team in 2003, and has recently re-joined the group as Ernie Els Group Brand Manager focussing on the South African market.

His son Ben is autistic and Els has used his profile to raise money for charities devoted to the condition, whilst also establishing the Els for Autism Foundation.

In 2009, he hosted the first annual Els for Autism charity golf event, which featured many PGA Tour and Champions Tour players. That year, he raised $725 000 (R4.9-million) for the Renaissance Learning Center, a non-profit school for autistic children, near his residence in West Palm Beach, Florida.

The pace of fund raising at the charity golf event has been maintained, and after it was recently held for a third time the money raised by it had topped $2.2-million (R14.9-million).

Els, along with his wife Liezl, has established the Els Center for Excellence which, it is planned, will combine the Renaissance Learning Center with a research facility. It is a $30-million (R203-million) project and the couple has committed $6-million R41-million) of their own money to it.

To top things off, mention must be made of Els as a successful golf course designer, with top class layouts in Asia, Europe, the Middle East, the Americas and southern Africa.

They include, among others, the Savannah course at Mission Hills in China, the re-design of Wentworth in England, The Durrat al Bahrain in Bahrain, The Els Club in Dubai, Hoakalei in Hawaii, and Oubaai in South Africa.