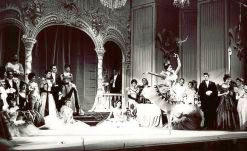 Gerald Samaai, principal tenor for the Eoan Group, during a rehearsal at the Cape Town City Hall. 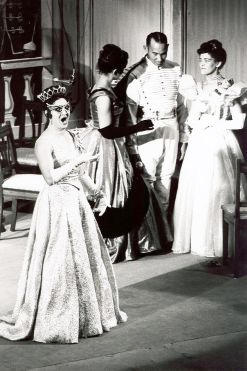 A new book has been published to celebrate the 80th birthday of the Eoan Group, South Africa’s first grassroots amateur opera, ballet and drama organisation.

Eoan – Our Story is the first book to tell the story of the relatively unknown group, which was established in 1933 by British immigrant Helen Southern-Holt, as a cultural and charity organisation in the former inner-city suburb of District Six in Cape Town.

The publication is a project of the Documentation Centre for Music (Domus) at Stellenbosch University (SU). It was compiled by the Eoan History Project, with Dr Hilde Roos and Wayne Muller as editors.

The Eoan Group played an important role in promoting the performance of classical music in South Africa, developing artistic talent and preserving the vibrant cultural heritage of District Six.

This historic area is known for the forced removal of about 60 000 of its residents during the 1970s by the apartheid regime.

The name Eoan comes from the Greek word ‘Eos’, the goddess of the dawn. In Greek mythology she is personified as the one who brings the hope of a new day. The group’s founder chose this name as it referred to her desire to bring hope and new opportunities to the community of District Six.

Despite working under the constraints of apartheid, the organisation provided a platform where gifted actors, musicians and dancers could express their life’s calling.

“Their story is inspirational. It is time to celebrate their memory,” says Roos.

For many people who had talent, this was their only chance.

“This is why the organisation was so important,” she says. “It gave people an opportunity to develop their talent and perform, even if these were limited opportunities.

Through the book the Eoan History Project hopes to preserve the organisation’s history for future generations.

The publication tells the story of Eoan’s establishment, but also shows the impact of the apartheid government’s racial policies on South African communities.

“What is extraordinary about this group is that there is just about no other example in the country where the evolution of a cultural group and the development of the apartheid regime are so closely linked,” Roos says.

When the Eoan Group started, their headquarters were situated in District Six and 15 branches were established throughout the Cape Peninsula by the mid-1950s. They offered a wide range of activities that included ballet, folk dance, speech, drama, singing, painting and sewing.

After the destruction of District Six, the group moved to their new premises, the Joseph Stone Theatre in Athlone.

Years later, documents and photos of Eoan’s productions were found at the theatre. The photos, permits for performances, letters and programmes were organised into an archive which has been housed at the SU Music Department since 2008.

Roos says many stories about the group and its members were undocumented for years, and numerous oral accounts of their activities appear in this book for the first time.

The book is an oral history and includes extracts from 47 interviews which have been structured in a narrative around themes such as opera and ballet productions, and is complemented by photos and other archive material.

The interviews were done mainly with former Eoan members, most of which sang in the group’s opera productions.

During the 1950s, Eoan performed to mixed audiences. But Roos says the group’s activities became more restricted as apartheid intensified in the 1960s.

“It had a major impact on their performances, but they kept going amid the political difficulties,” she says.

Eventually apartheid legislation completely prohibited mixed audiences. To comply with these requirements, the group applied for permits to perform in the City Hall for mixed audiences from 1966 onwards.

Roos says the group suffered a setback when they were forced to accept financial support from the apartheid government’s coloured affairs department, which caused their standing and support in the community to suffer.

“They were forced into a tricky compromise,” she says. “They needed funding to put on performances but they also didn’t want to betray their community.”

Despite these conditions, they remained successful and popular, and this was widely reflected in ticket sales and media coverage.

Outstanding performances, against all odds

During their artistic peak from the 1950s to 1970s, the group often performed to packed houses in Cape Town’s best concert halls.

Eoan performed the first full-length indigenous jazz ballet by a local composer for a South African ballet group. The Square by Stanley Glasser was about gang life in District Six.

From 1956 until the late 1970s the group had an active amateur opera section which performed at arts festivals and annual opera seasons and toured throughout South Africa (1960 and 1965) and the United Kingdom (1975).

In 1956 they performed Verdi’s La Traviata in the Cape Town City Hall, Eoan’s artistic home before apartheid legislation forced them to move to Athlone.

Some of Eoan’s members went on to build successful international careers.

“Many of them went abroad, got bursaries and took their chance at better opportunities,” Roos says. “Some big names emerged from the group.”

They were mostly dancers, but a handful of singers also made it overseas, despite not having access to good vocal training in South Africa.

One of the group’s success stories is Vincent Hantam. According to Scotland’s National Centre for Dance, Hantam danced most of the principal roles with Scottish Ballet from 1975 to 1991, and has performed with many companies on the local and international stage.

“He had an exceptional voice,” Roos says.

He received no musical or vocal training while in South Africa, but in 1967 he secured a bursary from the Schneier family of Johannesburg to study in Milan.

In 1969 he won the famous Verdi competition in Busseto. He made his debut in 1971 at the Metropolitan Opera in New York as Canio in I Pagliacci – the first South African to sing there.

The Eoan Group stopped performing operas in 1977, but the company still exists today and they focus on dance productions.

According to the team who compiled the book, the interviews with former Eoan members show how much people invested into the arts through the group, the extraordinary circumstances in which they had to operate, and the influential role that the group played in so many lives.