Megaphase is a company specialising in making and distributing road traffic signs, boards and protective clothing. It also does road markings
(Image: Flickr) 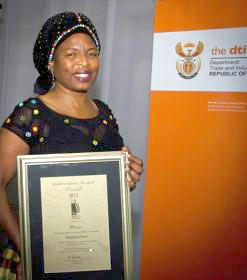 Nokuthula Dladla said that going through obstacles in life only builds character, and that adversity can be turned into triumph.
(Image: Megaphase)

Adversities in life can be overcome and greatness can achieved, judging by the achievements of Nokuthula Dladla, the overall winner of the prestigious annual Technology for Women in Business (TWIB) Awards.

The awards were hosted by the Department of Trade and Industry (DTI) at the Birchwood Conference Centre in Boksburg at the end of October. According to the DTI, the awards are made to recognise and reward female entrepreneurs for the significant impact they have made in various sectors of the economy, through the application of technology in their businesses.

Her company, Megaphase Road, competed for the honours with Institute for Performance Management, a local centre of excellence in integrated performance management solutions for global competitiveness; TSLS Holdings, which specialises in legal matters; and Agro Tractor House, a company that imports Danish agricultural machinery into South Africa.

Dladla walked away with R600 000 (US$67 670) worth of prizes from the Small Enterprise Development Agency, a lap top, and a goody bag from mobile provider Cell C. She will also attend the Global Summit of Women in Malaysia in 2013.

She said: “I’m only starting to digest the win now. I’m doing photo shoots and interviews left, right and centre.”

Speaking after the awards, Deputy Trade and Industry Minister Elizabeth Thabethe said: “I would like to congratulate Nokuthula and all the women nominated once more for their technology efforts and innovations and remind them of the potential that they have contributed towards the economic activities of our country, at a local, national and international level.”

Dladla was born in Tembisa, in Ekurhuleni, on the East Rand, and lived with her grandmother until the age of seven, when she moved to Zola in Soweto to live with her mom. “My grandmother used to play fafi and we would sell seasonal vegetables, eggs and sorghum beer. This is where my entrepreneurial spirit comes from,” she said.

She went to school until 1976, when she dropped out while in Grade 9 and returned to live with her paternal grandmother in Tembisa, because of an abusive father. Dladla was dating Walter when she found out she was pregnant with her first child, Thabo, in 1977. Walter paid lobola – the bride price – and they were traditionally married. They have been married for 36 years.

“After two years of looking after Thabo at home I began my foray into working. I could never hold down a job,” said Dladla. Working experience included stints at a fish and chips café, a garage, a bottle store and as a switchboard operator.

Although she couldn’t keep a job, she could feed her family through her other ventures, selling various items. “I sold clothes, crockery, soap; I just had a passion for selling and I think I’m a natural salesperson,” said Dladla. She learned everything about running a business while working at a second-hand furniture shop in Hillbrow, downtown Joburg’s densely populated flatland, in 1980.

“The owner wanted to sell me the shop because I was such a diligent employee but because I was afraid to risk our family home I refused to take the owner up on his offer of me putting [up] our house – which was worth R71 000 ($8 000) – as payment.”

She usually made the bank deposits for the furniture shop. And despite not having a matric qualification, a manager at the Nedbank Hillbrow branch offered her a job. “I worked my way up the corporate ladder of Nedbank establishing myself as a great marketer of their products, but I couldn’t go forward because I had no matric.”

Nedbank was her home for 17 years until she resigned in 1997 and moved to a company called Name Plate Centre, which does exactly what she is doing with Megaphase. “I immediately increased their sales in my position as marketer and I was given 25 percent shares in the company.”

Dladla added that with their family growing to four with the birth of her daughter, Thando, her husband was very supportive as her work entailed a lot of travelling. She was encouraged to start her own company by an unofficial mentor, John Munere of the Department of Public Works in Venda, with whom she worked while she was at Name Plate.

“Munere used to hassle me a lot about starting my own business,” said Dladla.

But when she eventually resigned and went off on own route, she forgot she had to resign as a director. Name Plate incurred debts and as director she was bound to them.

Megaphase now operates in two provinces, Gauteng and Kwazulu-Natal. “We own the factory that deals with distribution in Roodepoort and we deal with manufacturing in Durban,” said Dladla.

In Johannesburg, Megaphase employs 14 people and in Durban, 42. “We are in the process of partnering with another company in Zimbabwe to expand the horizons.”

Of the staff, 90 percent had no matric, she said, but the company trained them from scratch. Megaphase also took them on courses that would not necessarily benefit the company, but rather themselves.

“I was given opportunities by people in life and if it means the company has to spend money for the betterment of our staff then I’m all for it,” said Dladla. The company also cared for 70 primary school pupils and she mentored aspiring entrepreneurs. 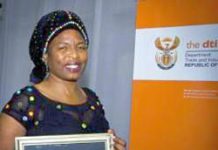