Zinto Activation Group is a brand
activation company that uses
unconventional routes to achieve
its goals. 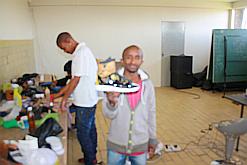 Sifiso Dlamini, founder and CEO
of Eish Hade, shows off a concept
shoe for his summer 2012 range,
while his partner Nkululeko works
in the background.
(Images: Ray Maota) 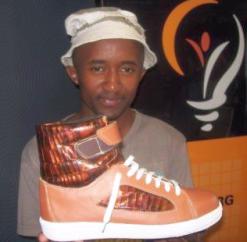 Dlamini holds up one of his nubuck
and leather sneakers.
(Image: The Business Place)

Sifiso Dlamini, has always been a sneaker fanatic. By the time he was 12, he owned 12 pairs of footwear because he knew that in Soweto, that was how one was judged.

Dlamini is the founder and CEO of an aspiring streetwear brand named Eish Hade, which is currently focusing on footwear. Eish Hade loosely translates as “oops…I’m sorry” and is a term usually used in the townships after stepping on someone’s toes.

“I used to sketch sneakers in my spare time instead of going to play; this is where the passion to make my own sneakers came from.”

Eish Hade sneakers are handcrafted and prices range from R280 (US$30) – R500 ($60), but one can also put a personal touch to them with customisations which, depending on the fabric used, will push the price up.

“My partner Nkululeko Ndlovu and I were toying around with the name of the brand when we realised what most people in Soweto would say if they stepped on someone,” said Dlamini, “and we decided to make it the name of our brand.”

This is where he was to meet his future partner Nkululeko Ndlovu, when they attended school together from 2002 – 2006.

After school Dlamini ran a spaza and games shop at home to provide an income – at the same time he started taking apart old shoes to get an idea of how they are put together.

Although they parted ways after matric, the pair reconnected when Dlamini realised he could turn this sneaker-making hobby into a business.

Dlamini’s favourite brand of sneakers while growing up in the 1990s was the Adidas Superstar, worn by most US hip-hop artists at the time.

“When I saw how successful Loxion Kulca was I knew then that I could make my brand work,” said Dlamini.

Using an old pair of sneakers that he took apart, leaving only the shell, Dlamini re-assembled it using his own material in 2008 and this was to become his concept sneaker.

“I made a few other pairs which I sold to friends and family. They loved them and from these I got a lot of feedback and constructive criticism,” said Dlamini.

His mother also had a big impact, supporting him by buying material and letting him use her sewing machine so he could pursue his dream.

Turning Eish Hade into a business

Dlamini registered Eish Hade as a company in 2009 but he had trouble getting funding to start daily operations and was still working from his room at home.

In March 2009 Dlamini went to The Business Place (TBP) looking for help with training in making shoes and funding to buy equipment.

During a number of one-on-one consultations at TBP he was referred to ChemCity. This Sasol group company assists entrepreneurs with creating business plans to gain access to funding.

They also facilitated access to training for Dlamini at African Action which manufacturers school shoes, where he learnt about producing top quality products.

In 2010 Dlamini and Ndlovu were attending the annual Back to the City music event in Newtown in the heart of Johannesburg, and were showcasing their wares when fortune shone on them.

Back to the City is a hip-hop festival that has taken place on 27 April, Freedom Day, for the past six years.

At the event they met Kyle Verbeek, account executive at Zinto Activation Group, who immediately loved their products and initiated a follow up meeting with them.

“Meeting Kyle was a blessing because he initiated the meeting with Michelle Combrink, the owner of Zinto Activation Group,” said Dlamini.

Zinto Activation Group is a brand activation company that brings a brand to the consumer’s attention in a way conventional media would not be able to, using methods such as road shows.

Dlamini said: “Michelle immediately loved our raring-to-go attitude and gave us R10 000 ($1 214) to buy material, as well as a workshop on their premises for free.”

This relationship is mutually beneficial as Zinto would need branded sneakers for their activation work and Dlamini would supply them.

“I get to showcase my work to other people, thanks to Zinto’s exposure which brings in money to the company. We’ve done activations for Zinto involving telecommunications company MTN, Willards, the snack company; and BIC pens,” said Dlamini.

Dlamini and his team are currently using three old model sewing machines and are in need of new machinery to up their production.

“We are currently able to make at least four pairs of sneakers a day but under pressure we can make seven to eight,” said Dlamini.

Dlamini said: “If there is someone who can fund us, they can come to the site and we can evaluate according to our business model how much is needed help us.

“I see this company growing and us having our own factory in 10 years, creating employment and providing skills training to others.”