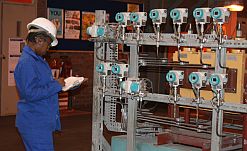 Thousands of jobs opened up in all major
sectors as total employment grew by
5.6% in March compared to February. 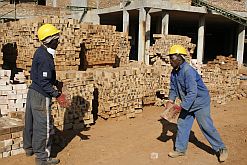 About 541 000 people are estimated to
be employed in the construction sector.
(Images: Bongani Nkosi)

The employment rate in South Africa hit a two-and-a-half year record high in March, according to the Adcorp Employment Index released on 11 April 2011.

Thousands of jobs opened up in all major sectors as total national employment grew by 5.6% last month compared to February.

“This is the first time in well over two-and-a-half years that all sectors, occupations and employment types recorded positive growth,” said Adcorp’s CEO, Richard Pike.

The transport sector enjoyed the highest employment growth rate with 18.3%. Mining now employs about 316 000 workers, as employment grew by 11.5%.

Manufacturing now has over 1.4-million employees. Showing good recovery from the recession, employment in this sector grew by almost 9.4% from February. It experienced a -3.4% decline in February compared to January.

Other record high employment growth rates were seen in the electricity, gas and water supply industries with a combined 13.6%, and agriculture at 11.8%. Up to 89 000 South Africans are employed in the former, while there are now about 103-million skilled agricultural and fishery workers in the country.

Employment in the financial sector stands at over 1.6-million and grew by 3.8% in February. More than 1.6-million ply their trades in the wholesale and retail industry.

South Africa shed more than a million jobs due to the economic recession that persisted throughout 2009, but the March employment growth rate is an indication of change and progress.

This employment growth, though not guaranteed, bodes well for the government’s campaign of reducing the country’s unemployment rate by 10% over the next 10 years. Through its New Growth Plan, the government is set to create five million jobs within the period.

It’s called on the private sector to play a more significant role in this drive by creating more jobs.

All government spheres have been called upon to create jobs. Adcorp’s February employment index found that new government jobs increased by 5.5% in the month. The growth was largely in municipalities and provincial government.

The national unemployment rate currently stands at 24%, following a 1.3% drop in 2010. Statistics South Africa estimated that at least 13.1-million South Africans were employed by the fourth quarter of 2010.

Temporary employment boasted a 3.7% growth during February. Adcorp pointed out that this form of employment coupled with contract jobs has increased by 64.1% since 2000.

Adcorp maintains that the temporary jobs boom is in line with international trends and “South Africans still needs a shift in mindset around the notions of temporary and permanent employment”.

This trend may put a strain on millions of South African workers, as it limits their involvement in the economy and personal growth. Complications always emerge when short-term contract employees need to access funding for necessities such as housing.