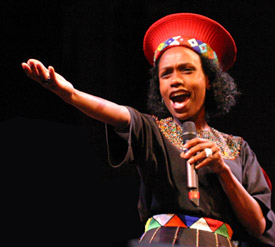 The National Geographic Society has named South African HIV/Aids activist Zinhle Thabethe as one of its Emerging Explorers for 2008, as part of a programme that recognises and supports uniquely gifted individuals from fields as diverse as music, space exploration, anthropology and mountaineering.

Diagnosed with HIV in 2001, Thabethe (30) works with HIV/Aids awareness programme iTeach, an initiative of Harvard Medical School in the US. The organisation focuses its activities exclusively on KwaZulu-Natal, a province hit hard by the HIV/Aids pandemic, operating out of Edendale Hospital in Pietermaritzburg.

Launched in 2004 as part of National Geographic’s mission of “inspiring people to care about the planet”, every year Emerging Explorers honours a select group of outstanding young pacesetters who are making a difference in their chosen fields. Each of them, the society says, has the potential to become an Edmund Hillary, Jacques Cousteau or Dian Fossey.

Candidates are nominated by a global network of experts, with no unsolicited applications considered. National Geographic looks for innovators who stand on the threshold of a promising career in exploration and whose recent accomplishments show a potential for future breakthroughs. They are given a grant of US$10 000 (about R76 000) to help them fulfil that promise.

At iTeach, Thabethe works with those infected with HIV, inspiring and educating them, and helping them to access treatment.

She is also a leading member of the 30-member Sinikithemba Choir, based at the Sinikithemba HIV/Aids Christian Care Centre. All the choir members are HIV-positive.

Sinikithemba, which means “we bring hope”, is linked to the McCord Hospital in Durban, KwaZulu-Natal. The hospital specialises in treating Aids patients: some 70% of its admissions HIV-related and about 40% of women who give birth there are infected.

Sending out a global message

Sinikithemba’s mission is to treat the person as well as the illness, helping the HIV-positive to live a normal and productive life. The organisation’s choir uses music to challenge prejudice against those with HIV/Aids.

“By living and performing publicly as HIV-positive people, we show that Aids can be a controllable, treatable disease,” Thabethe says. “People can live productively, positively, and be happy for the moments they have.”

The choir has performed with Sir Elton John, and sang at the opening session of the 10th annual Conference on Retroviruses and Opportunistic Infections, held in Boston in 2003, where they shared the stage with Bill Clinton. The former president’s Clinton Foundation works towards not only treating Aids but also preventing its spread.

Thabethe and the Sinikithemba Choir were featured in an hour-long documentary titled iThemba: Hope, which chronicles the choir’s work in the fight against HIV/Aids. The film has been screened at film festivals across the world, including the Media That Matters festival, the Alliance Francaise French festival held in South Africa, and the film festival hosted at the 2005 International Conference on Aids and Sexually Transmitted Infections in Africa in Abuja, Nigeria.

After an initial toxic reaction to her treatment, Thabethe is now on a successful antiretroviral programme that helps her avoid opportunistic infections such as tuberculosis, pneumonia and meningitis.

Since her diagnosis in 2001 she has educated herself about her condition and the ways in which it can be managed. She has overcame a number of obstacles – limited education, poverty and ostracism by those around her – to establish herself as an inspiration to her community and country, showing them that antiretrovirals can make a difference, and that HIV need not be a death sentence.

In an interview with National Geographic, Thabethe said it helps to understand the disease, the medication prescribed, and what is expected of patients.

“I felt so much better, just having that knowledge,” she said. “That’s why I became a counsellor myself. I tell patients that I may not feel their pain, but I know what they are going through and can help support and guide them.”