Former Banyana Banyana coach Desiree Ellis will feature in the next instalment of Brand South Africa’s Play Your Part TV series, to be aired on Sunday 27 July at 9pm on SABC2. 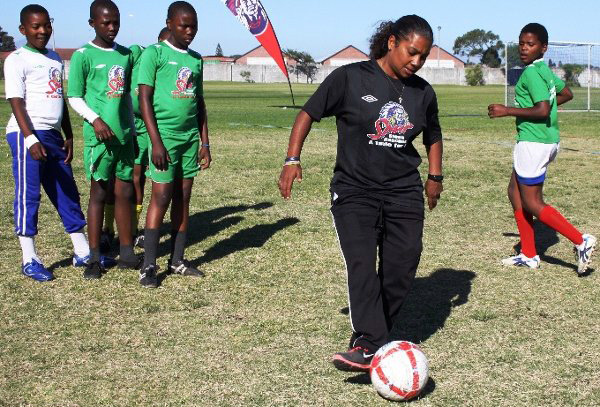 During her time in the South Africa team Desiree Ellis enjoyed phenomenal success, winning 23 matches, losing seven and drawing two. Ellis is one of the few individuals to have captained a national football team for an entire decade, playing 32 matches and winning 23 of those – a win rate of 72%. (Image: MYPE)

The atmosphere is electric; the crowds in the stands roar. Women kitted out in football gear watch the ball with eager devotion. The spirit of female footballers is alive and kicking in South Africa. And one woman who has played her part for the nation while mastering the precise art of ball play, is soccer star Desiree Ellis.

In the 1990s black women were under-represented in South African soccer, yet Ellis made her international debut with the women’s national team, Banyana Banyana – “the girls, the girls” in isiZulu, to match the men’s team, Bafana Bafana (“the boys, the boys”) – against Swaziland in 1993. She was 30 years old and proved her brilliance by scoring a hat-trick, a feat normally considered a retiring point in professional football. She was made captain of the team, and led Banyana Banyana until her retirement in April 2002.

Ellis led the way in raising the profile of women’s football in South Africa. When the country hosted the African Women’s Championship in 2000, she was steadfast at the helm and steered her side to a runners-up finish. Ellis was given recognition for her services to soccer in the same year when she received a Silver Presidential Sports Award. In 2002, she led Banyana Banyana to the Cosafa Cup title.

During her time in the South Africa team she enjoyed phenomenal success, winning 23 matches, losing seven and drawing two. Ellis is one of the few individuals to have captained a national football team for an entire decade, playing 32 matches and winning 23 of those – a win rate of 72%.

She said that former Manchester United midfielder Ryan Giggs inspired her football career. “He is an inspiration – his work ethic, discipline and the way he looks after his body.” This gave Ellis the courage to pursue her dream.

She went to school in Salt River, Cape Town and lives in Hanover Park, also in the Mother City. She has a brother and two sisters. One sister lives in Australia with her family; the other, Erna, died in 2010. Her father died in 1988, never seeing his star daughter on the Banyana field.

She was often on the streets in Salt River, kicking a ball with the boys. It was not long before a career in Banyana Banyana beckoned, and Ellis obliged. “As we all know, there was no money in it in those days. After my first call-up, I was fired from my job and was unemployed for the next three years. I had no income and life was hard,” she said.

But she has since reaped the dividends. She was chosen by world football body FIFA, along with other stars such as Kalusha Bwalya, Phil Masinga and Doctor Khumalo, to be an ambassador of the 2010 World Cup. She also coached Spurs Women FC, which has teams in the Absa and Sasol leagues.

Ellis is also an ambassador for the Special Olympics. In Malawi, in February, a unity football match was played in the southern African country, which included Mark Fish and Phil Masinga and Malawian star player Ernest Mtwali. In her role, Ellis is raising the profile of the world’s poorest people who are intellectually disabled. People with disabilities face huge barriers in accessing health care, food and nutrition, education, employment, and social protection, and people with intellectual disabilities suffer the most.

Special Olympics provides year-round sports training and athletic competition in a variety of Olympic-type sports for children and adults with intellectual disabilities, giving them continuing opportunities to develop physical fitness, demonstrate courage, experience joy and participate in a sharing of gifts, skills and friendship with their families, other Special Olympics athletes and the community.

The former midfielder now spends her time doing projects for Stars in their Eyes and Soccer4All. Run by former international player and now coach George Dearnaley, the latter is a grass-roots football initiative using former South African international players to coach primary school kids. Ellis also participates in the Sports Heroes Walk Against Aids, founded by Cynthia Tshaka, and is an assistant coach of Banyana and coach at Spurs Women FC, as well as an analyst for SABC Sport.

Stars in their Eyes, a non-profit organisation, is a registered legal entity. Ellis is a public figure in South Africa, and has grabbed the challenges of the Stars in their Eyes Foundation with both hands. She has great commitment to the upliftment of her community, and has communicated the plight of her people to the likes of Michelle Obama and Hilary Clinton.

The foundation is run jointly by Dutch fresh produce company Cool Fresh International and the Western Cape’s department of cultural affairs and sport. Each participating disadvantaged community is twinned with a Dutch football club to give local coaches training in football techniques and life skills, which are then passed on to the youngsters. The foundation combines the joy of football with the alleviation of social problems.