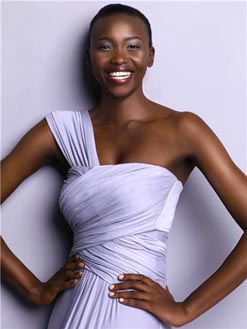 Top model Lerato Moloi is one of South
Africa’s most recognisable faces. 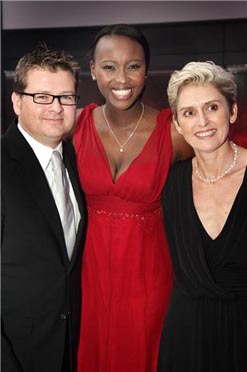 One of South Africa’s top models and  business entrepreneur Lerato Moloi, has clinched a lucrative deal with Elizabeth Arden, one of the world’s leading cosmetics houses.

She joins top Hollywood actress Catherine Zeta-Jones, who’s the global face and spokesperson of the group.

Talking about her recent ascension to the top of the cosmetic product endorsement world, Moloi could hardly contain her excitement. “It is an honour to be considered the only other [than Zeta-Jones] face of Elizabeth Arden.”

The leggy 26-year old will represent the cosmetic brand in South Africa.

In addition to producing Elizabeth Arden’s first black face, South Africa is also the only country to have its own local face and ambassador for the brand. Advertising campaigns and magazine covers with Moloi’s face are due to hit the shelves from next week.

She has described her role, as the ambassador of Arden’s new line of products aimed specifically at black women, as dispelling the myth that  “black don’t crack”. The saying basically purports that black skin is immune to ageing and skin cancer – a bit of conventional wisdom that is completely false.

The cosmetic company says they were looking for a woman that embodies the unique qualities of South Africa.

Moloi, according to Elizabeth Arden, exudes confidence, beauty and strength of character, “As a confident young woman who believes beauty radiates from within, Lerato epitomizes a company that has been making women feel beautiful for almost a century,” says Barbara Shepherd, General Manager of Elizabeth Arden South Africa.

“She not only represents the beauty element of the brand but also embodies its core values.  Lerato is an aspiring businesswoman, proud wife and mother.  She is passionate about educating women to look after their skin – especially in our harsh climate where UV protection is vital.”

Speaking of her appointment, Moloi said, “Being chosen as spokesperson for Elizabeth Arden South Africa is an honour. Ms Arden was a visionary and champion of total beauty, believing that beauty begins with healthy, beautiful skin. I am looking forward to my role as skincare and beauty educator.”

Elizabeth Arden spokesperson in South Africa Inge Ferreira said South Africa was an obvious choice, as it has great growth prospects for the cosmetics industry, “South Africa ranks second only to China in its growth potential for global cosmetics sales,” she said.

Moloi is the third face to represent products aimed at black skins for international brands. Actress and businesswoman Connie Ferguson is the face of Garnier, while actress Terry Pheto, of the famed Oscar-winning film Tsotsi, represents L’Oreal.

Lerato Moloi is one of the country’s most recognisable faces. In 2000 she made international news when she was turned away from a New York modelling agency, which told her that she was “too fat” to be a model in the cut-throat American industry.

Speaking to BBC News, Moloi was not fazed about her figure after the experience.

“It’s a problem that has been going on for decades but the designers still use [underweight girls] because they can – and they will as long as they have a clientele that prefer it,” she said. “At the end of the day, it’s the designers’ prerogative.”

In 2002, she became a finalist in the M-Net Face of Africa beauty contest.

Her modeling career started in 1999, when she was just 17.  Her first shoot was an editorial for ELLE magazine, which was followed by a fashion show at the prestigious for top South African designer, Julian.

Moloi has worked in a number of countries including Australia, New York, Cameroon, Nigeria, China and London.  She has participated in SA Fashion Week for the past 8 years for some of the South Africa’s top labels including Stoned Cherrie, Hip Hop, Sun Goodess, Julian and Clive Rundle.

Her work also includes several TV and radio commercials as well as a cameo role on a local soapie.

In existence for 99 years, Elizabeth Arden has remained a strong cosmetic brand around the world.

With operations primarily in the United States, the UK, Canada, Australia and Spain, the firm specialises not only in skin care and make-up, but in fragrances too. It has a broad portfolio of brands, as it owns, licenses and distributes more than 300 fragrances to both mass and mid-sized retailers.

A number of top celebrities around the world have partnered with Elizabeth Arden to producer their own fragrances. These include singer Mariah Carey, actress Hilary Duff, singer Britney Spears and writer Danielle Steel as well as veteran screen siren Elizabeth Taylor.