In a first for South Africa, the 2016 Edinburgh Medal will be jointly awarded to Kevin Govender from Cape Town’s Office of Astronomy for Development (OAD), and the International Astronomical Union (IAU).

The award will be bestowed during the upcoming 2016 Edinburgh International Science Festival in a ceremony on 30 March.

The Edinburgh Medal is given each year to men and women of science and technology whose professional achievements have made a noteworthy impact on the understanding and well-being of humanity.

“Besides its technological, scientific and cultural contributions, astronomy fundamentally gives us the perspective we need to change the world, and it is amazing to see how this vision has rallied people and organisations from just about every continent,” Govender said. “It has been, and continues to be, a journey driven by many with a shared passion for both science and society.”

South Africa’s Kevin Govender is named as a recipient of the Edinburgh Medal. (Image: Supplied)

President of the IAU Professor Silvia Torres Peimbert said she was delighted the development work of the union was being recognised. “Astronomy is an exciting and stimulating pursuit and has a large part to play in inspiring the next generation of scientists from developing countries.

“I hope this award will highlight this important work and encourage others to contribute.”

The Edinburgh Medal was awarded to an individual or an organisation that had not only discovered great science but had contributed more broadly to society, explained the director of the Edinburgh International Science Festival, Dr Simon Gage.

“It’s an unusual award that recognises two dimensions of the work – the scientific and the social consequences. I’ve followed the work of Govender and the IAU for many years. The positive impact in the schools, universities and communities where they operate is incredible and is helping to build a better world.”

Lord Provost of the City of Edinburgh Council, the Right Honourable Donald Wilson said Govender and the IAU had made an astronomical difference in various developing countries such as Armenia, China, Colombia, Ethiopia, Jordan, Nigeria, Portugal, Thailand and Zambia.

“The IAU strategy to use astronomy to stimulate global development is inspiring. It demonstrates how science, technology and culture impacts on our everyday lives and how we can use science to improve communities,” Wilson said. “I’m thankful to Kevin and the IAU for creating opportunities that might lead us to healthier and wealthier futures.”

Minister Naledi Pandor officially opened it in 2011; it was tasked with the establishment of regional offices around the world and three astronomy-for-development focus areas:

See the map for IAU-OAD funded projects and regional offices:

Govender was appointed the OAD’s director in 2011. He was previously part of a tiny delegation that successfully lobbied the United Nations to declare 2009 the International Year of Astronomy (IYA2009); he chaired the Developing Astronomy Globally Cornerstone Project in the same year.

He was included in the Mail & Guardian’s Top 200 Young South Africans, and received the National Science and Technology Forum’s Science Communicator award in 2011.

Govender is also on the boards of various scientific organisations, such as the Southern African Association of Science and Technology Centres, the Quest Editorial Board and STEM Committee of the Academy of Science of South Africa.

He has a background in experimental nuclear physics and extensive experience in community development initiatives in South Africa.

In 28 years, this is only the second time that The Edinburgh Medal has been jointly awarded to an individual and an organisation; in 2013 Professor Peter Higgs and CERN received the medal.

The medal is made of sterling silver and features the original Edinburgh International Science Festival logo – a juggler performing with different symbols of science.

Ah this is excellent news. Congrats @govender and @Astro4Dev! https://t.co/MvftnsHoI4 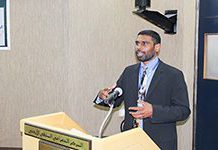