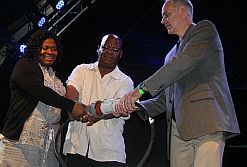 Councilor Matshidiso Mfikoe, the MMC for
environment in Johannesburg;
Johannesburg Mayor, Amos Masondo and
WWF-SA CEO, Dr Morne du Plessis switch
off the power to Orlando Stadium at the
start of the hour. 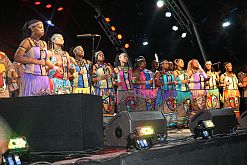 The Soweto Gospel Choir had the crowd
dancing and singing along during their
performance. 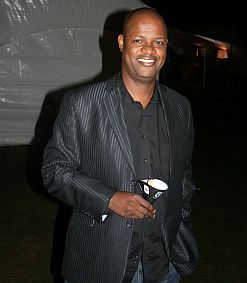 Nedbank’s head of cause marketing,
Maseda Ratshikuni, said that Nedbank
has been at the forefront of nature
conservation for more than 20 years and
will continue to seek better ways to make
the environment more liveable.
(Images: Ray Maota)

The international climate change campaign Earth Hour was celebrated amid a shower of candlelight and music in Johannesburg recently.

The cause was symbolically marked in the city by the switching off of lights at the Orlando Stadium in Soweto, south-west Johannesburg, on 26 March 2011 between 8.30pm and 9.30pm.

The celebrations, held at the Orlando West Regional Park opposite the stadium, were organised by the South African branch of the World Wide Fund for Nature (WWF-SA), Nedbank and the City of Johannesburg.

Earth Hour, spearheaded by the WWF, calls for greater awareness of climate change and urges people around the globe to switch off their lights and appliances for an hour from 8.30pm on a set date each year. The campaign started in 2007 in Sydney, Australia, and had gathered the support of 128 participating nations by 2010.

The WWF is one of the world’s largest independent conservation organisations whose aim is to fight the depletion of the world’s natural environment. It organises Earth Hour events in more than 100 countries, and has more than five-million supporters.

Masondo said: “Earth Hour is very symbolic because it is a call for mass action in ensuring the preservation of the planet for future generations.

“This symbolic gesture is particularly important as it starts with how people, in their own holds, will try and conserve energy sources and fight climate change. Meaningful change can only happen through mass participation, so let’s do more together and we can save the world.”

Mfikoe added: “Climate change is the biggest challenge facing us today and the message we are relaying is that the energy is there, we just have to use it wisely.”

Masondo, Mfikoe and Du Plessis were on the stage, holding the power cable, as the countdown to Earth Hour began. After switch-off, the crowd stood in awe of the darkened stadium.

Candles were lit and musical performances by the world-renowned Soweto Gospel Choir and the Bala brothers followed.

During the hour of darkness, the animated crowd danced to the music and sang along while holding their candles.

Themba Nkosi, who lives near the park, said: “The parks that have been built by the city and the planting of trees in Soweto has really made our environment more liveable. Now we need to learn to use the abundance of energy sources we have more wisely as everything gets depleted with time.”

Business with a green agenda

Nedbank’s Ratshikuni said: “Nedbank has been at the forefront of nature conservation for more than 20 years and will continue to seek better ways to make our environment more liveable.

“As a business, to mark Earth Hour today, we have switched off the lights in all our buildings in the country, as well as billboards.”

The financial institution partnered with WWF-SA in 1990 to establish the Green Trust, which aims to protect the unique biological diversity of Southern Africa.

Nedbank clients are encouraged through Nedbank’s Green Affinity banking products to support the trust. The bank has so far donated more than R90-million (US$13-million) to more than 150 major conservation projects.

The WWF-SA was established in 1969 by the late Anton Rupert and seeks to, among other things, prevent the loss of species, protect important eco-regions, conserve water and promote sustainable energy practices within businesses.