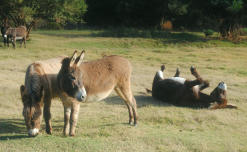 There are 22 donkeys at the sanctuary, ranging in age from two up to 40 years. 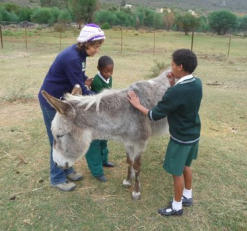 School visits are planned to fit in with the curriculum, and include educational activities with the animals. 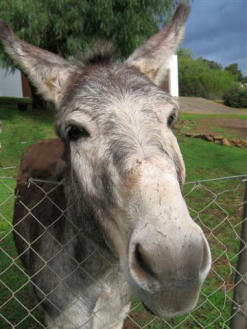 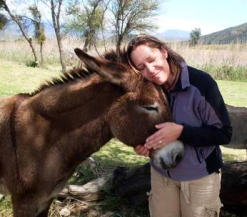 There’ll be a whole lot more hee-hawing from the donkeys in the sleepy Western Cape village of McGregor – they are to get a new sanctuary, to be opened in January 2014.

Neglected and elderly donkeys make their way to McGregor from far and wide, to enjoy a pampered retirement after years of unflinching toil for their often abusive owners. Donkeys are often thought to be the most hardworking domestic creatures around, uncomplainingly serving their masters until their last days.

Or until they find Eseltjiesrus.

Some 11 years ago Dr Johan van Zijl and his wife Annemarie, a horse lover, received a request from the SPCA to provide shelter for two badly neglected donkeys which had been working at the McGregor brickworks, where for years they’d been blindfolded and forced to walk in a circle, in the process of brickmaking.

“They were severely depressed,” says Van Zijl, a retired psychologist. They took in the two donkeys, naming them Vaal and Japie – in Afrikaans, a vaaljapie is a young, everyday wine.

It wasn’t long before they realised that there was a huge need for a permanent sanctuary for “abused, discarded and elderly” donkeys. With increased demand for space, the Van Zijls leased land from Thornvilla Wine Farm, just outside McGregor, and in 2007 established the Eseltjiesrus Donkey Sanctuary, a charitable organisation, with renowned musician and playwright David Kramer as its patron.

“We need to raise the status of donkeys – they have no champions,” says Van Zijl.

Donkeys from as far afield as Somerset West, Cape Town, Wellington and Atlantis were brought to Eseltjiesrus, which means a “haven of rest for donkeys” in Afrikaans.

But as the demand for taking care of more donkeys increased, it was clear a bigger sanctuary had to be found. Now, the nine-hectare Helpmekaar Farm, just one kilometre from the current location, has been purchased and is being prepared for the upcoming relocation.

“Our dream of owning our own land has been realised with the purchase of this property,” says Van Zijl. “We now face the exciting challenge of raising funds to customise and build our new permanent home for the donkeys to the best standards.”

The new location will boast a visitors’ centre, education facilities, and a donkey shop, and will take about a year to set up.

The sanctuary is open from Thursday to Sunday, and over the weekends the Van Zijls offer educational tours for people curious about donkeys, and eager to learn more about them.

“Donkeys are very clever animals. Whereas horses will flee when there’s danger, donkeys will stand still and decide on their options,” explains Van Zijl.

“They can also be extremely cheerful and full of fun, keeping everyone on their toes. They are much smarter than horses.”

They are inquisitive and sociable creatures, and when happy, they’ll stand with their heads and ears upright. And don’t be deceived by their often downcast look, he adds. They are probably just catching a quick power nap while standing, the way donkeys and horses sleep.

Eseltjiesrus now has 22 donkeys, ranging in age from two to 40 years. The animals live to around 40 years, and Van Zijl calls in a vet to put down two to three donkeys each year. He stresses that this only happens when it’s absolutely clear the animals have reached the end – they become listless, stop eating and are less mobile.

“It is a sad moment but we don’t allow them to suffer.”

There’s a colourful collection of donkeys at the sanctuary – Thabo, with a white teardrop below his right eye, “a teenager and always scruffy”; and a white donkey called Spokie, rescued in Swellendam in a very bad state, who is “very sociable, with a resounding voice”. There’s Eeyore, a shaggy, long-haired brown gelding, with blonde highlights, and the “elder statesman of the herd, well over 30 years old.” Then there’s the elderly mare Dinky, who has dark edges on her ears and affects an “anxious posture”.

The sanctuary offers advice to donkey owners across the country. “Part of our mission is to promote the welfare of all donkeys, and we enjoy researching solutions to questions – we continue to learn in the process!” states the website.

Recently the sanctuary received a request from owners who took over a badly neglected donkey. The animal, Oscar, had overgrown hooves, and the owners approached Eseltjiesrus for advice. Trimming the hooves would require sedation, and that required Oscar to be comfortable with human contact. Staff visited him regularly over several months to allow him to become habituated, until he was finally sedated. Oscar’s hooves were trimmed by two vets, while the procedure was an opportunity to train local farriers.

“His tendons will take a while to adjust to the new angles in his legs, but he is assured of a long, pain-free and mobile future, thanks to the patience and team effort of Donkey Sanctuary staff, vets, farriers and the concern of his new owners,” says Van Zijl.

There are donkey sanctuaries around the world, from Australia and Europe to India and Zanzibar. Eseltjiesrus is the only one in South Africa, and is an accredited member of the governing body of the veterinary profession in the country, the South African Veterinary Council.

The sanctuary was nominated for the Cape Winelands District Municipality Mayoral Tourism award in 2012, in the category of adventure, outdoor and/or ecotourism business of the year. It got through to the finals.

Eseltjiesrus is run by volunteers, part-time and permanent staff, in all 20 people. It relies largely on donations but also on people adopting donkeys, and giving money for their upkeep. Their major fundraiser is an annual three-day book sale, with up to 10 000 books for sale, 60% of which are new, donated by Exclusive Books and various publishers. 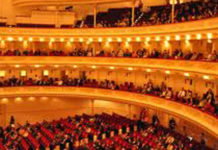 Science education gets a boost 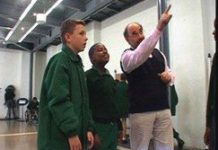