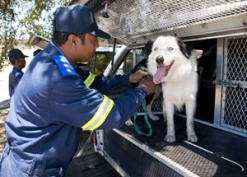 Two specially trained dogs are now helping the City of Cape Town’s metal theft unit in their quest to end the costly theft of copper and other non-ferrous metals in the city.
(Image: www.capetown.gov.za) 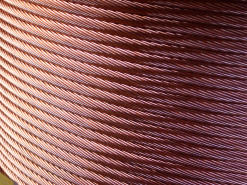 Stealing cables leads to power outages and a telecommunications setback; it diverts tax funds to replace the loss that could otherwise have been used to supply electricity to those without; and it interrupts business and industry.
(Image: www.wikipedia.org)

Cape Town’s Copperheads have been joined by a K-9 unit in their quest to end the costly theft of copper and other non-ferrous metals in the city. Two specially trained dogs are now helping the City of Cape Town’s metal theft unit (MTU), better known as the Copperheads.

The unit is a wing of the metro’s law and enforcement service.

“Criminals are constantly devising ways in which they can evade detection. We recently had an incident whereby the suspects had concealed stolen cable in a cupboard, under a secret trapdoor,” said the Cape Town mayoral committee member for safety and security, JP Smith.

“This would have been overlooked if the information received in the tip-off was not accurate. It is for this reason that the city identified the need for a K-9 unit.”

Assistant Chief Neil Arendse, the head of the unit, initiated the step to help officers find stolen copper and aluminium. The K-9 Copperheads were introduced at an official launch on 22 November, at which they gave a demonstration of their expertise.

“This event should be seen as a historic moment for the city’s law and enforcement service,” said Smith.

“Specialist dogs work in a variety of law enforcement and military functions, detecting a wide range of specific scents that they have been trained to recognise. Detecting the presence of copper is just one more field in which they excel.”

Four Copperheads went on a four-week dog handler’s course, during which they learned how to bond with the dogs, handle the dogs off the leash and issue commands to the dogs. The two sniffer dogs were taken through a selection of exercises that imitate conditions in the field; they also learned obedience.

“With the aid of these new members, the MTU will now be able to search for copper in a variety of concealed locations,” Smith explained.

“It is a fact that dogs have a more keen sense of smell than humans do. When dogs are trained to recognise the smell of copper cables, they are an invaluable weapon in the fight against metals theft. To offer an idea of just how effective they can be, a human’s sense of smell relies on an area of membrane the size of a postage stamp; in a dog this is the size of an A4 sheet of paper. This keen sense of smell allows these dogs to find copper even with the introduction of disguising odours.”

He said residents had welcomed the dogs, and on the whole were surprised, excited and impressed to hear that the dogs could detect copper or aluminium. “The community allowed the animals to freely execute their duties, while passing comments such as, ‘This is a good thing’ and, ‘Now the criminals cannot hide.’”

Stealing metal and cables is a crime. To conceal the evidence, the stolen metal is often burnt so that it can’t be identified, and is then sold to scrap metal dealers, who sell the metal abroad.

Once the thieves have been caught, the Copperheads hand over the cases to the South African Police Service for criminal prosecution. They follow tip-offs and leads to arrest cable thieves and investigate scrap metal dealers to make certain that they abide by the law and don’t trade in stolen goods.

Under the Second Hand Goods Act, which came into effect in May 2012, a person who buys stolen goods – including cables – is as guilty of a crime as the person who steals the goods, and could be sentenced to a maximum of 10 years in jail.

But thieves don’t just risk imprisonment; stealing cables and other metal frequently endangers their lives. They can be burnt or shocked, or even killed when stealing high voltage cables.

Yet the scale of the crime is massive. Cape Town has no copper mines, but more than R77-million (US$8.7-million) worth of copper leaves the city each year. Media reports placed the cost of copper theft to the city at more than R10-million ($1.2-million) in the first six months of 2011 alone. It was reported in September of that year that Telkom, Spoornet and Eskom spent R263.5-million ($30.4-million) from February 2010 to January 2011 dealing with cable theft and national estimates were that the economy lost about R5-billion ($578-million) a year to cable theft.

In the 2006/2007 year, it cost Cape Town ratepayers R22-million ($2.5-million) to restore stolen and vandalised equipment at substations, sewage pump stations, street lights and other council property, prompting the introduction of the Copperheads in 2007. Since then, this figure has dropped, though the theft of metal and cables continues to hit the local economy where it hurts.

Stealing cables leads to power outages and a telecommunications setback; it diverts tax funds to replace the loss that could otherwise have been used to supply electricity to those without; and it interrupts business and industry. Trains are frequently delayed or don’t run at all, leading to man-hours lost. The knock-on effect is loss of jobs as companies are forced to downscale or even close.

But in Cape Town, the Copperheads are making headway – which is expected to improve with the help of the sniffer dogs. Between January and September 2011, for example, the unit arrested 101 suspects and recovered 10 516kg of stolen cabling worth R630 000 ($73-million).