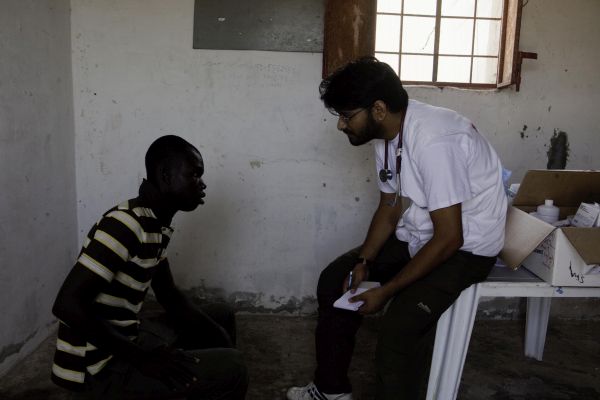 When a bomb detonates, the blast wave – pressurised compressed air – causes major internal injuries as victims closest to the explosion are knocked down. With the explosion comes the blast wind and a vacuum is created, making it impossible to breathe. The shockwave follows closely behind, further damaging organs in a remarkably fragile body. Victims are peppered with flying splinters, hot steel or junk metal, included in the bomb’s design to cause the maximum number of injuries.

Now, imagine that you are the doctor faced with victims of that blast streaming into your impermanent, understaffed and under-equipped hospital in a bleak tribal region of Pakistan. Who do you treat first? The child covered in blood or the woman stumbling around, clutching her chest with no visible wounds to treat.

South Africans working with Doctors Without Borders (Médecins Sans Frontières (MSF)) make these life-altering decisions every day. The aid group’s latest awareness campaign to publicise its life-saving work will put Twitter users in their shoes and asks if they could make those #ToughDecisions.

South African citizens returning from placements with MSF find it difficult to share the intensity of their experiences, but it is these experiences that inform the new campaign. According to Borrie la Grange, head of communications of MSF South Africa, the campaign wants to turn the flippant Twitter hashtag #ToughDecisions on its head.

“We all make decisions every day, about wardrobe choices or meals. We wanted to take that offhand action and show the power of making and how the same process changes lives in life and death situations. We wanted to clue South Africans in to the  work that is being done by their neighbours and friends.

“Not everyone can do the work these men and women do but while sitting safely on your couch watching TV you can do something small to help them. For a price of one cup of coffee a month you can help save the life of a pregnant woman in South Sudan or treat a TB patient in South Africa.”

South African medics on the frontlines

In 2012 as bombs fell around the hospital in a cave in Syria, Dr Mohammed Dalwai had to decide: was it safe enough to stay as the fighting crept closer to their makeshift facility? “We knew there was no other medical care available. If anyone had been injured who would have treated them? In the end we stayed, but we reduced the team, keeping just the most vital medical staff in the field.”

South Africa-trained medics – like Dr Vanessa Naidoo – have an enviable reputation internationally as trauma and emergency specialists. When working in a converted chicken farm in the middle of a warzone with non-existent medical infrastructure, it is the skill of the medics that saves lives.

“As a doctor why do I ‘go to war’?” Naidoo asks unflinchingly. She explains that to her, and her colleagues, disregarding the sick or wounded, the newborn and the frail would be an unbearable humiliation to bear. Despite the trying circumstances she always goes back.

“We don’t have much to work with in the field, but we do the best we can with what we have and what we know.  What keeps us going back is seeing the innocent and the wounded and understanding that we are all the same, and we have a responsibility to try to use our skills to ease the suffering and speak out against injustice where we can.”

Naidoo is not a bleeding heart needing to save the world. She admits to a feeling of powerlessness when she looks at all the need in the world, “but I know how to help an old diabetic who has not had treatment for months. I may be able to help a child who tripped and fell while running behind a truck full of soldiers cheering them on. I could deliver a baby and save a woman in labour the unavoidable three-hour hike for medical care across an unsafe border. All of these things I can do.”

Doctors like Dalwai and Naidoo, or Stefan Kruger and midwife Zani Prinsloo, do not see themselves as heroes says La Grange. The work they do is heroic but they are simply answering a call and fulfilling a need in themselves to provide medical care where it’s needed, much like MSF colleagues from around the world.

George Mapiya, an MSF nurse, draws inspiration from a Somali colleague. In 2013 MSF was faced with one of its toughest decisions. After 21 years the safety of MSF staff became an issue after several attacks and the deaths of staff. Guarantees of safety were no longer in place so MSF decided to shut down its clinic in Marere, in war ravaged Somalia.

A day after MSF closed operations armed men came to take over the remote Marere clinic intent on evicting staff and patients. “The assistant project coordinator was running operations and negotiating with the Al Shabab. If you see him you won’t believe it. He’s a simple, small-bodied man. The gunmen were so tough – they don’t have time to reason. But he succeeded in getting them to back off so that his team could provide five months of medication supply to the last of the TB patients in the ward. He stood up to a group of armed men for the sake of our patients. He was my hero,” Mapiya says.

About Doctors Without Borders

Doctors Without Borders is present in 67 countries and treats nine million of the worlds most in-need patients. Its budget is 90% funded by individual donations and allows the group to be independent, neutral and impartial. Its staff were on the ground within days of the 2010 Haitian earthquake, have run programmes in inner city slums in Johannesburg and on the battlefields of Syria. Established in 1971 the organisation also runs programmes bringing medical care to people who have been excluded from healthcare or those suffering from epidemics or neglected diseases.