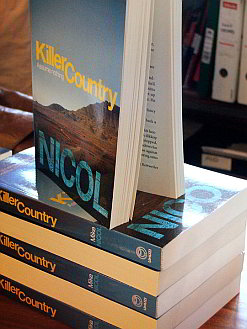 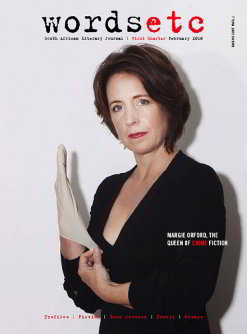 South Africans like to talk about crime. It creeps into conversations at dinner parties, in shebeens, on radio talk shows and in parliament.

Perhaps it was only a matter of time, then, until all that talking fostered creative writing and reading – not just in newspaper and magazine articles or online, but in books. South Africa’s publishers, booksellers and literary communities are all in a stir over “crime lit”.

Literary websites like Book SA and LitNet are dedicating an increasing proportion of their content to so-called krimis. Earlier this year, literary journal WordsEtc brought out a special issue on the phenomenon, guest edited by Joanne Hichens, herself a crime writer. The publication featured interviews with, among others, the local queen of crime fiction, Margie Orford.

Most recently, the inaugural BookEx book fair in Johannesburg hosted CrimeWrite, the first festival of its kind in the country. Organiser Mike Nicol expressed some disappointment at the turnout, but affirmed nonetheless that the writers participating showed “they can deliver the goods … there is a great marketing opportunity here.”

Nicol, a self-confessed krimihead, is the doyen of the South African crime writing scene and its most ardent promoter. This is quite something for a man who used to feel only disdain for the genre.

He describes his crime novels as “pulp fiction with hardboiled prose”, and is unashamed about the formulaic requirements of much popular writing – in particular, he is critical of “academics who haven’t yet got their heads around the idea that commercial fiction has a completely legitimate place in any society’s literary life”.

In penning these words, Nicol no doubt had in mind a review of his book Killer Country by literary scholar Leon de Kock of Stellenbosch University. The debate amongst members of the Book SA community following this review demonstrated the false perception that professional academics look down from their ivory towers on popular books, their readers and their writers.

De Kock’s review in fact praises Nicol’s writing, but poses some important questions nonetheless: what does it mean for a former writer of serious literary works to turn his hand to genre fiction? Is this a process of dumbing-down in order to gain as wide a readership as possible? And if so, what assumptions are being made about readers? More specifically, why is it that so many writers have, like Nicol, chosen to focus their careers on crime writing?

These are important questions, particularly in a country such as South Africa. There are ethical implications to representing the phenomenon of crime in the pages of a book – not least because writing for entertainment and writing for edification are by no means mutually inclusive.

This dilemma is linked to the problem of definition. What is crime writing? After all, you would be hard pressed to identify any South African book (including those by our Nobel Prize-winners) in which transgression of the law is not a central theme. As such, crime has always been pervasive in South African literature.

A useful distinction can, however, be made between fiction and non-fiction crime writing. One of the panel discussions at the CrimeWrite festival included well-known non-fiction authors Peter Harris, Antony Altbeker, Martin Welz and Chris Marnewick – all of whom have written about true crime in earnest engagements with South Africa’s crime epidemic. For the most part, however, when people refer to crime writing they mean what Nicol himself calls “schlock fiction”. This is, more or less, writing according to a set of conventions already established by authors from countries where crime is not as serious a social problem as it is here.

Those who defend crime fiction in South Africa could present a moral case if they wished to: in a country where, all too often, justice does not take its course, krimis offer a kind of vicarious gratification. As Nicol admits, crime novels tend to conclude with the triumph of moral justice, if not of the justice system: they appeal to a reader’s “innate desire to have good stomp all over evil”.

But it’s not that simple. Many crime novels, in true realist form, reject neat endings in which the goodies beat the baddies; moreover, it’s not always that easy to tell the good guys from the bad guys.

“One of the things that attracted me to crime fiction,” adds Nicol, “is the moral ambiguity it creates. There are no angels.”

Likewise, crime writers do not claim any moral high ground for themselves. That WordsEtc cover image of Margie Orford is suitably ambiguous: looking sombre as she pulls on a white glove, Orford could either be a detective about to get to work or a murderer about to commit a heinous crime.

Quoting Raymond Chandler’s observation that “crime fiction is a parody of itself, as tongue-in-cheek as it gets”, Nicol suggests that krimis mock “the author, the novel and the reader. It’s a game. Crime fiction confronts serious social issues but simultaneously says, don’t take me seriously.”

Indeed, there seems to be consensus among South Africa’s crime writers that their vocation is fun – just as they want the reading experience to be entertaining. Yet the awkward question remains: what happens when writing and reading pleasure involves voyeuristic violence? There are no clear answers.

A glance at the promotion tables in local book retailers provides evidence enough that South African readers are not reluctant to buy crime fiction from international authors such as Stieg Larsson and Ruth Rendell. This would suggest that most consumers see krimis as a form of escapism, which may be one reason why they avoid locally-produced crime lit: it is simply too close to the bone.

But the major reason is, unfortunately, that South Africans are generally still hesitant to spend their time and money on works by South African authors.

As Nicol laments, “Often we need to be ratified by overseas publication before local readers will buy our books.”

This trend is slowly being reversed, and more and more South African books are on the shelves. If South African crime writing does prove to be as popular as is hoped by local practitioners of the craft – from veterans such as Deon Meyer and Wessel Ebersohn to newcomers like Sara Lotz and Sifiso Mzobe – then it may well help to grow a reading culture across the country.

The last word can be left to Nicol: “It’s not so much a matter of dumbing-down as a new kind of book being written. The high literature will remain but readers now have more choice when it comes to buying local fiction. The trick is to make them aware of that choice.”