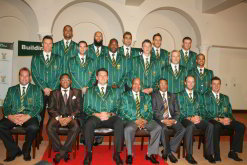 The Proteas have never won the coveted
title before and their supporters are
hoping that 2011 will be their year.
(Image: Bongani Nkosi)

Rural communities in South Africa will now also get in on the ICC Cricket World Cup action.

They needn’t worry about missing any games, as the Department of Rural Development and Land Reform has decided to broadcast matches at Village Viewing Areas used during the 2010 Fifa World Cup.

The four-yearly tournament, which features the world’s top one-day sides battling it out for the title of world champion, takes place in 2011 in India, Bangladesh and Sri Lanka between 19 February and 2 April.

Pakistan was also selected as a host but because of unrest and violence, the 14 games scheduled to take place there have been divided up amongst the other three nations – eight for India, four for Sri Lanka and two for Bangladesh.

The World Cup kicks off on 17 February with a long-anticipated opening ceremony in Dhaka, Bangladesh. South Africa’s national team and a favourite to lift the cup, the Proteas, open their account with a game against the West Indies in Delhi on 24 February.

Big screen televisions, DStv satellite receivers and other relevant equipment was installed in all viewing areas during the 2010 Fifa World Cup, and were given to communities afterwards as part of the government’s Comprehensive Rural Development Programme.

The rural development department decided to use the Cricket World Cup to sustain the continued use of the sites as recreational facilities, bringing the community together.

The department hopes that the football spirit will carry through to the upcoming cricket matches, especially because that spirit has already been kindled with the Department of Sport and Recreation’s Magnificent Cricket Friday campaign to generate excitement around the event and support for the national cricket team.

Magnificent Fridays is also boosting support for the national rugby and hockey teams, which will vie to bring home the trophy in their world cups later in the year. South Africans are encouraged to set aside their corporate gear on Fridays and don official replica clothing of any of the national sporting teams.

“Magnificent Fridays is about showing support for all our national teams,” said minister of sport and recreation Fikile Mbalula at the Johannesburg launch of the initiative a fortnight ago. “The campaign will continue throughout the year.”