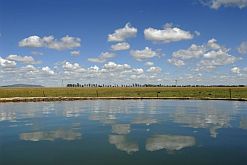 The Department of Water Affairs will be
launching courts that will address water
crimes that threaten the security of supply
to lawful water users
(Image: Graeme Williams,
MediaClubSouthAfrica.com. For
more free photos, visit the image library)

South African Water Affairs Minister Buyelwa Sonjica announced on 11 August 2010 that environmental courts will be set up to address crimes that threaten the quality and supply of water.

Sonjica, speaking at the Agri SA water conference in Johannesburg, said her department was concerned about the impact of deteriorating water quality in South Africa, as it’s among the most water-scarce countries in the world.

She said the new courts would help deal with all water-related crimes, but that role-players in the agricultural industry should also come up with ways to protect the country’s water supplies. She named agricultural practices, mining and urban development as the main contributors to water pollution.

“It’s a serious matter for us and you will soon be invited to the launch of the first courts because we want to strengthen our regulatory bodies in this regard. I understand that water pollution is one of the areas of great concern for the agricultural sector today,” she said at the conference.

The Department of Water Affairs (DWA) will be working closely with the South African Police Service and the directorate of public prosecutions to address water crimes that threaten the security of supply to lawful water users, the minister said.

She added that unauthorised or illegal water abstraction was also a problem, and the department was strengthening its enforcement capacity to deal with such offenders.

She said 14 water-management inspectors had been recruited and trained, and that the capacity of the compliance, monitoring and enforcement directorate had grown significantly.

“We will intensify this aspect of our work to ensure that we bring all offenders to book.”

Turning to the issue of municipal waste-water, Sonjica spoke about the Green Drop Certification Programme, which encourages municipalities to comply with drinking-water and waste-water legislation put forward by the DWA.

Being awarded Green Drop status implies excellent waste-water management and a respect for the environment and the health of the community.

“Currently we have more than 50 qualified assessors conducting consultative audits on the management of the waste-water treatment works to guide local authorities in the direction of excellence,” the minister said.

According to the Green Drop Report (PDF, 1.22 MB), released in 2009, 203 of the 449 waste-water systems assessed scored better than 50% when measured against the set criteria for quality and management, while about 7.4% of all waste-water systems were classified as excellently managed.

Sonjica said the department was well on its way in meeting the 2010 target of assessing all the municipal waste-water treatment works in the country.

“Shortcomings in the local government funding model as well as the skills deficit in the labour market exacerbate the problem even further.”

In closing, Sonjica urged the farmers attending the conference to work with the department to fight illegal water abstraction.

“Without effective regulation, your water may dry up or the quality may deteriorate significantly,” she said.