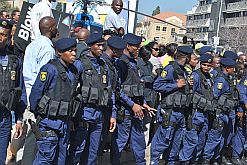 Police officers have been urged to retain
their physique. 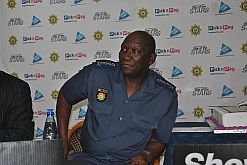 National Commissioner of Police Bheki Cele
and other top officials have given out their
mobile phone numbers as part of the
police’s community safety initiative.
(Images: Bongani Nkosi)

South Africa’s National Police Commissioner General Bheki Cele has made it easier for South Africans to report crime by giving out his personal mobile phone number and encouraging other top officials to do the same.

Cele announced his number at a recent community meeting in Soshanguve, north of Pretoria, and called on his colleagues present to follow his example.

This was aimed at improving the public’s communication with police and promoting community safety.

Zweli Mnisi, media liaison officer for the Ministry of Police, said: “We are in the process of printing out a national directory so all citizens will have access to the numbers of generals and other officials.”

There have been talks of introducing a new nation-wide emergency number for crime reporting, but this idea has been put on hold to investigate alternative solutions.

According to the Electronic Communications Act, 112 will be the new number to dial in case of a public emergency – and calls to it will be free from fixed lines and mobile phones. Operators will be able to direct the complaint to the local authorities where the call was made.

The new number was proposed due to reported difficulties in reaching the police call centre on 10 111, which is the existing emergency line.

In Soshanguve there have been complaints that calls to 10 111 are not being answered and there’s no follow up once a crime is reported to that number.

Although there are problems with the 10 111 call centre, Mnisi said the number “is still effective in some cases”.

“But there’s a combination of various issues. We’re constantly working on efficiency by training officers and making sure they’re equipped to deal with the calls – but sometimes there’s no passion and commitment from the police officers.”

Mnisi added that the high incidence of prank calls to 10 111 also caused difficulties.

He added that “direct communication with police officers has also proven to be useful”.

Moodey pointed out that there were, however, some drawbacks of using the 112 detail. “The number will work if you have a problem at your home or place of work in the area, but what happens when you’re travelling between two districts or are just not in your area?”

By dialling 10 111, South Africans are put through to a 24-hour crime-reporting call centre.

An operator takes down all the details from the caller and a reference number is given to the person as proof of having called. All conversations are recorded for accountability.

A vehicle from the nearest police station is then dispatched to the scene. The Flying Squad is called in to respond to high-priority cases that need to be reached quickly.

Calls to the centre are free from a fixed line, but are charged at regular mobile phone rates when the latter is used.

“An internal review of the performance of 10 111 has been done. Part of the issue is that call centre agents don’t know how to appropriately classify the cases being reported, so we are refining our recruitment,” Mnisi said.

He soon became known for his no-nonsense approach to crime and declaring war on criminals.

He was previously the MEC for Transport, Safety and Security in KwaZulu-Natal.

Since his appointment, Cele has emphasised the need for police officers to be fit and in shape to fight crime effectively. He’s also vowed to fight corruption within the ranks of the police.

“If you are wearing a size 32 uniform today, it must stay that way for the next seven years – don’t come back in two years time and ask for a size 34,” he said.