David Kibuuka, LNN “reporter” and stand-up comedian, joins Trevor Noah at The Daily Show, as a writer, bringing some edgy Mzansi-style satire to the Comedy Central show’s next evolution. 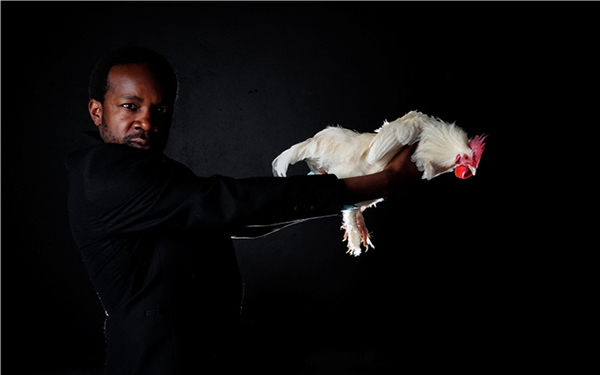 David Kibuuka is already a household name to most African comedy fans, having plied his particularly nuanced style of comedy on both the local and African comedy circuits for over ten years. He began his career as part of the brains trust behind the legendary Pure Monate sketch show, and later was a writer and hapless, opinionated field reporter for local satirical news show LNN (Late Night News).

David won the 2012 Standard Bank Ovation Award in the Comedy and Variety category at the National Arts Festival, and has starred in South African comedy films Blitzpatrollie and Bunny Chow. He has performed stand-up at festivals across the world including Toronto, London and New York.

He is also the voice of the Comedy Central channel, which makes him suitably primed for the next chapter of his career.

Kibuuka will take a mighty step forward into the international spotlight as he prepares to join Trevor Noah at Comedy Central’s The Daily Show in New York, as the ever-popular satire news show moves into its next evolutionary phase without longtime host Jon Stewart.

While Noah takes care of the hosting duties, Kibuuka will be part of the writing team, upholding the show’s celebrated legacy of combining radical, biting humour with current US and international news events.

While Kibuuka may only be working in the background for the show, it is a remarkable achievement for the South African. TV writers are often the fuel that drives the traditional late-night show format in the US, and writing positions for these shows are some of the most sought-after writing jobs for aspiring comedians looking to break into the business.

Kibuuka will be joining an exclusive and often secretive club of humourists that help create the cutting-edge zeitgeist of American popular culture. He’ll be following in the footsteps of Wyatt Cenac, Dan Sterling (writer of the comedy hit The Interview) and John Oliver.

The job is a surefire springboard to a career in the competitive entertainment industry and a remarkable bookmark in Kibuuka’s life, one that all African fans can be proud to be associated with.

David joins Trevor Noah at The Daily Show from 28 September 2015.

To celebrate this great success for Kibuuka, take a look at the evolution of his comedy talent with some of David’s best bits for LNN, Pure Monate, as well as some of his live stand-up:

“South Africa is not Africa, Zimbabwe is Africa. We are Sandton, they are Hammanskraal, a place you only go to for funerals.”

David on Trevor Noah cancelling their tour to join The Daily Show: “Now, I have to go back to being an au pair.”

The 2013 comedy film Blitzpatrollie: “I don’t take the shots, I call the shots.”

“Before there was anything else…” Classic Pure Monate moments from the late 1990s.