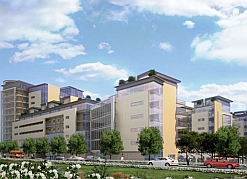 Two new urban development sites in Gauteng will lead the way for the rest of the world in green living.

The Menlyn Maine and Zonk’izizwe multi-purpose developments will provide their residents with the ultimate in convenience and style, while at the same time showcasing cutting-edge green building technology.

Both developments are part of a world-wide project on sustainable urban growth, initiated by the Clinton Climate Initiative, itself a project of the William J. Clinton Foundation. Featuring 16 initial projects in 10 countries, the programme runs with the support of the US Green Building Council and aims to demonstrate that climate-positive practices can be achieved even with large-scale real estate developments.

The ultimate aim is to achieve a zero carbon footprint by offsetting emissions with the use of clean energy sources, waste and water management, and specialised lighting and transport systems. These developments will set an economic and environmental example for cities around the world to follow.

According to the Clinton initiative, the number of people living in cities is expected to grow to 70% of the world population by 2050. The time is right to implement strategies that minimise the impact of this rapid growth on the environment.

The two South African projects join others in Australia, Brazil, Canada, India, Panama, South Korea, Sweden, the UK and the US. Once they are all complete, says the Clinton Climate Initiative, nearly 1-million people will live and work in so-called climate positive communities. More projects are then expected to follow.

Both are situated close to the Gautrain rapid rail link, which will link Pretoria, Johannesburg and OR Tambo International Airport. The Gautrain is in an advanced stage of construction, with all the underground drilling complete and train units already operational at the test centre in Midrand.

Located in Pretoria’s eastern suburbs, Menlyn Maine will offer residential, work, shopping and entertainment facilities. The 135 000m2 development, which is already under construction, is close to main roads and freeways, and is within walking distance of Menlyn Park shopping centre, one of the biggest in the country.

Based on the system devised by the Australian Green Building Council, it provides property developers with an independent assessment of the greenness of their buildings. The rating system is divided into various functional categories such as retail, office, and residential, among others. Four-, five- and six-star ratings are awarded to deserving buildings.

The Green Building Council describes a green building as one that is “energy efficient, resource efficient and environmentally responsible, incorporating design, construction and operational practices that significantly reduce or eliminate its negative impact on the environment and its occupants”.

The council promotes green building as a way of using resources efficiently while mitigating the effect on climate change and creating a healthier environment for people to live and work in.

Carbon emission reduction will also be achieved through the use of locally produced or recycled products during building, wherever possible. Examples of building materials that include recycled content are acoustic panel ceilings, floor tiles and carpets, pre-cast concrete systems, and structural steel.

State-of-the-art yet inconspicuous security systems, managed from a central security point, will be installed throughout. An internal fibre-optic cable network will connect all buildings. Responsible landscaping is another important factor, with some 5 700m2 of indigenous planting in the plans.

Menlyn Maine is expected to be complete within 10 years, but possibly as early as five. The first set of commercial buildings is due for completion in late 2010. All parks, roads and services will be in place by 2011.

The US$2-billion (R15-billion) Zonk’izizwe (isiZulu, meaning “all nations”) is situated in Midrand between that area’s Grand Central Airport and the exhibition and conference centre Gallagher Estate. The name refers to South Africa’s diverse mix of cultures.

It is intended to be an all-new town centre between Johannesburg and Pretoria and is designed to make maximum advantage of the Gautrain, as it encompasses the rapid rail link’s Midrand station.

The US-based architectural and planning company Development Design Group, vastly experienced in similar large-scale projects around the world, is responsible for Zonk’izizwe’s design. Old Mutual Property Investments is the developer in South Africa.

Old Mutual bought the land back in 1987 and first announced its vision for the project a number of years ago. The recent Gautrain construction has given the company the impetus to begin development in earnest.

Zonk’izizwe sits on 220 hectares and will feature every possible convenience, including a hotel, outdoor shopping, a 15 000-car parkade, major retail outlets, offices, and homes. For entertainment, residents can look forward to a cinema multiplex, themed adventure rides, nightlife, parks, museums and an aquarium.

The development aims to cut down on carbon emissions by reducing the use of cars. Instead, residents will be within walking distance of basic services, or they may prefer to use public transport or cycle paths.

Other climate-friendly strategies include the installation of bio-water recycling and purification systems, and solar power generation.

Zonk’izizwe will be built in phases and will take between 10 and 15 years to complete. The first phase, costing around $125-million (R1-billion), will see the construction of essential infrastructure such as roads, water, power, and sewerage.