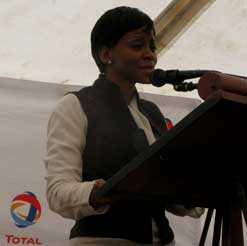 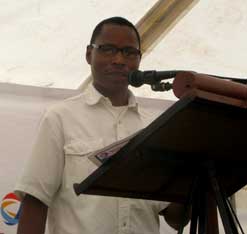 A view from the front of one of the homes of the 18 relocated families. A water tank and vegetable garden can be seen to the left. 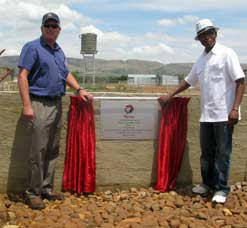 Frans Lombard and Thabo Molebatsi unveil a plaque at the entrance to the settlement. 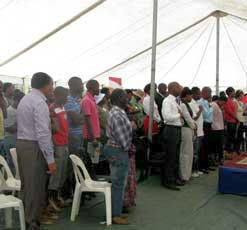 The community sings the national anthem at the end of the proceedings.
(Images: Valencia Talane)

In June 2012, the South African National Roads Association Limited (Sanral) embarked on a project to widen the N4 freeway between Rustenburg and Brits in the North West province. For this stretch of road, the development included the construction of a new carriageway as well as an off-ramp adjacent to the Total Petroport Magalies, a toll plaza on the N4.

For the community of Katlegong in the Bapong area of Modderspruit, this would bring long-term changes they had not expected. Eighteen families would have to be moved from the land they had previously occupied, close to the existing highway, to make way for the changes. This task would not be without its challenges, both emotional and financial.

The completed effort was celebrated on 23 October by the community, together with Fuelarama, a company that has operated Petroport since 1995, and its franchisor, fuel giant Total South Africa.

In order for these families to retain access to the plaza, which has a Bonjour convenience shop and a Steers fast food outlet, they would have to be moved to make way for the development.

“Telling someone that you’re going to make changes that affect their home is always an emotional issue,” said Fuelarama director Frans Lombard. “We obviously had to be sensitive in our approach.”

Sanral approached Fuelarama in June, giving them a September deadline to either complete the relocation project or cut access to their business for the settlement adjacent to Katlegong. But before the physical structures could be replicated on a new piece of land, negotiations with the whole community, not just the affected families, would have to start to eliminate issues of mistrust for either party.

Thabo Molebatsi, a former forecourt manager at Petroport, seemed the most obvious choice to play the role of middleman, because he’s also the chairperson of Katlegong’s Communal Property Association. He was willing to act as the liaison between Fuelarama and the community to help the two parties to come to a suitable agreement on the relocation terms. Soon enough, however, he would realise the legislative and logistical requirements of a project of this magnitude.

“There was a sense of mistrust from the community, and when the initial negotiations started, demands became less and less reasonable as time went on, and there were ultimatums, ” said Molebatsi.

It was at the point of a stalemate that the Department of Land Affairs was brought in to help restore either side’s faith in the process, added the community leader.

Because the land in question is privately owned and was handed back to the community as part of the government’s ongoing land redistribution programme in 1999, it was imperative that the department facilitate the negotiations, while also providing support on the legislative obligations of either party.

“The community needed to know that a deal like this would not come their way again,” said Molebatsi. “Even the people from Land Affairs made that clear.”

Referring to South Africa’s dark history of forced relocations of black and coloured families, mainly in the 1950s and 1960s, Molebatsi said his community’s scepticism was not unfounded.

“At some point I was labelled a sell-out by some elements within the community, some of whom questioned my loyalty, and that hurt because my loyalty will always be to my community as their leader.”

Total’s involvement, besides being Fuelarama’s franchisor, was to help make the project more than just about moving people from point A to B, said general manager of sales and marketing for the fuel conglomerate, Qetello Zeka.

“With all our franchisees, we seek to make their CSI projects sustainable, with an entrepreneurial focus for the communities they serve,” she said. “So when Fuelarama approached us to get involved in this, our mandate was to find out what value we could add to the relocation.”

A vegetable garden and several fruit trees – a very popular feature in the agriculture-orientated Magalies area – were planted, while a borehole through which running tap water is provided, was dug at the centre of the new settlement.

Although the homes are of corrugated iron, a fact that Lombard said Fuelarama could not improve on because of a limited budget, the stands are bigger and are fenced, which was not the case with the previous stands. For two of the families that had already built brick structures, the company restored these to their previous state.

“Some of these homes did not even have flooring at the old location,” said Lombard, “and it humbles me as a human being to be able to provide something as simple as concrete flooring for each and every one of them.

“When they found out that they would get newly-paved floors – something I take for granted in my own perfectly tiled home – they were very grateful.”

As for the vegetable garden and the trees, Lombard added, the aim was to add a viable element of ownership and responsibility. A small play area with swings was also added for the young children in the community.

Connecting with the community

After four months of negotiations with the community over the project, Lombard said they have now forged a relationship with them that they had not envisaged, one that was cultivated amid weeks of heated meetings and the temptation to give up.

“Today, even the children are used to seeing our faces here, and people know us by name.”

Molebatsi agreed: “We went from a place of animosity and negativity to a place where everyone realises how, by negotiating what works best for everyone, we can get something out.”

“We named the project ‘Selosesha’, which means ‘something new’ to symbolise that.”

Sedibeng Municipality councillor Peter Makgabo gave credit to the community for their patience, joking that everyone involved virtually qualifies as a lawyer after this process because they had to be thorough.

“We all learned a lot from the process, and the back and forth emails and countless meetings were well worth it.”

The carriageway and off-ramp development is expected to be completed in March 2013.