Martin Dreyer and Robbie Hunter led the pack in the race last year. 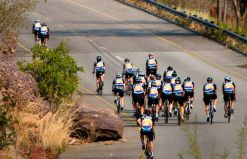 Riders face the ascent into the Waterberg in 2012.

It all started with the murder of Mike Thomson, a Computershare executive, in his home in September 2007. From that tragedy came the Mike Thomson Change a Life Cycle Tour, which is now in its sixth year.

Some 70 company executives will be pulling on their Lycra and helmets on 7 September in Swaziland, from where they will cycle 570km into neighbouring KwaZulu-Natal before returning to Swaziland via the steep Lubombo mountains. Cycling champion Robbie Hunter and super multi-discipline sportsman Martin Dreyer will accompany the execs on a fairly gruelling route.

Computershare South Africa established the Mike Thomson Change a Life Trust in 2008 to sponsor initiatives that support victims of crime and grassroots programmes that address the causes and symptoms of crime. The trust supports the DNA Project, iChoose to Change a Life, the Martin Dreyer Change a Life Academy, the Allan Thomson Kushido Karate-do and Nemato Change a Life.

“The sad reality is that there are 50 deaths every day in South Africa as a result of violent crime. Many people feel angry and threatened, yet feel apathetic and hopeless due to the enormity of the problem,” explains Stan Lorge, the chief executive of Computershare South Africa. “The Mike Thomson Change a Life Trust is dedicated to a peaceful future for all South Africans.”

The DNA Project promotes the use of DNA evidence in crime detection and conviction; iChoose to Change a Life empowers talented youngsters in adverse social and economic circumstances to become role models in their communities; while the Martin Dreyer Change a Life Academy, the Allan Thomson Kushido Karate-Do and Nemato Change a Life use sport and education to uplift disadvantaged young South Africans and offer them alternative options out of poverty. Each project is run by a powerful role model who has achieved success in his own career, and wants to give back to society.

Dreyer is a seven-time Dusi Canoe Marathon winner and his young protégés compete for the top positions in the Dusi each year; Thomson holds a black belt in karate and wants to build something positive out of his brother Mike’s death; Jan Blom at Nemato Change a Life has coached Olympic and university rowers in Holland and South Africa and is changing children’s otherwise hopeless futures.

This year’s tour is called the Nguni Tour because it will track ancient Nguni migration routes, which started centuries ago when Nguni people migrated south from west and central Africa. They brought with them languages and customs that became the Swazi, Zulu, Xhosa and Ndebele peoples in southern Africa. They occupied land running from Kosi Bay on the border with Mozambique, right through to the Great Fish River in Eastern Cape. They were pastoralists, their herds the fantastically patterned and coloured Nguni cattle.

This year’s tour starts in Ezulwini Valley near Mbabane in Swaziland, with cyclists heading towards Mkuzi in KwaZulu-Natal, before heading to the coastal town of Sodwana Bay, then heading back to Mkuzi the following day. The last day involves a 20km time trial in the Lubombo mountains of Swaziland.

This year’s cycle tour is expected to raise R3.5-million, bringing to almost R20-million the total amount it has donated to anti-crime and youth development projects in South Africa. Although the field is dominated by men, some of the women doing the race include Qedani Mahlangu, the Gauteng MEC of infrastructure development; Nicky Newton-King, the chief executive of the JSE; Ruan Jooste, the associate editor of money and investing at the Financial Mail; Ursula du Plooy, the executive director of Computershare South Africa; Katy Caldis, the head actuary at Liberty Health Holdings; and Diane Radley, the chief executive of Old Mutual Investment Group South Africa.

The 2008 tour consisted of three days along the Zambezi River, with cyclists riding 450km from Victoria Falls through parts of Zimbabwe, Botswana, Namibia’s Caprivi Strip and Zambia. Some 81 executives entered, and R2.3-million was raised. In 2009, 62 cyclists spent five days riding through Northern Cape, Free State and into Swaziland. Almost double the previous year’s amount was raised, at R3.5-million.

Again in 2010, R3.5-million was raised, with 69 cyclists riding 480km in Malawi over six days. In 2011, 70 executives rode the length of the Namib desert in Namibia, taking four days to complete 530km. The route started in Windhoek and headed westwards across the desert before ending in Walvis Bay. The race was tough – day one was a hot 121km, with a gruelling 201km trek on day two, followed by 111km through the desert in sweltering heat. Day four was 101km, with cyclists finishing along the salt road with the Atlantic Ocean to keep them company.

Then, in 2012, 75 cyclists strapped on their helmets to ride 550km through the Waterberg mountains in Limpopo. They climbed 5 000m through the bushveld and undulating terrain of South Africa’s northernmost province. Some of the comments from that tour are testimony to the effort put in by everyone. “I’ve finally managed to watch the Change a Life High Five Tour Documentary. Enjoyed the tour all over again. What you’ve built is amazing. I am very proud to be part of the Change a Life family,” said Nthime Khoele, the principal and co-founder of equity company Bopa Moruo.

Mike Estment, chief executive of NFB financial services group, said: “Thanks for an absolutely wonderful tour. It was all seamless, sublime and special.”

And Eric Janet, the managing director of Luxalite, an optical goods manufacturer, added: “I wonder if the Tour de France is as organised and as well run as your Change a Life tours are? With the tour having come and gone the fond memories of such a wonderful experience will linger on for many years to come.”