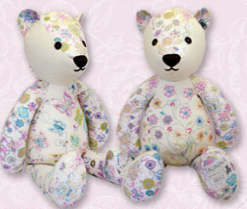 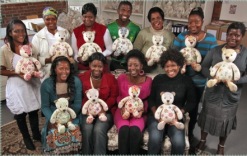 Each creation is marked with the seamstress’s initials and is a display of her inspiration and dreams for the future.
(Image: Taunina)

Tracey Chiappini-Young and Karen Jansen, founders of the soft toy maker Taunina, are on a mission to promote job creation in South Africa through the art of seamstressy. The toys are expensive – ranging in price from $201 (R1 780) to $600 (R5 320) – but keep in mind each one is handmade by women who come from disadvantaged backgrounds.

The entrepreneurs began their business with a strong focus on sustainable development and sustainable luxury. Of the profits from sales, 30% goes to the seamstresses – 20% through the Bear Essentials Fund to pay for their housing, health care and education, and 10% in productivity-related bonuses.

Chiappini-Young and Jansen founded Taunina in Cape Town in 2011 to help meet the growing needs of disadvantaged communities for employment and empowerment. “Taunina toys range from teddy bears to rabbits and puppies. The women who make the toys are incredibly talented seamstresses and embroiderers,” Chiappini-Young says.

The toys are made with the strictest quality control from the finest fabrics from repute textile houses such as Liberty of London, supervised by Chiappini-Young. Each toy takes four to seven days to make. The women must wash and powder their hands every 90 minutes to ensure the cotton stays clean. The completed toys are inspected carefully before they are shipped off in a one-of-a-kind Taunina hat box.

“We like to call the work we do a labour of love … it’s a brand with soul and feeling.”

The toys are marketed as heirlooms rather than as toys for play. The idea is that they become a part of a family and are treasured for generations.

Lions of their destinies

The name Taunina comes from “tau” meaning “lion” and “nina”, an acronym for the business term “no income no asset”. “The idea behind the name is that Taunina gives women who once had no income and no assets the power to become lions of their own destinies,” Jansen explains.

Chiappini-Young believes that the women who make the toys are artists in their own right. They are taught which patterns and colours go together so that a uniform aesthetic is achieved, but they are still given a large amount of creative freedom. “We afford our artists the opportunity to use their unique cultural heritage and artistry to not only earn a living, but also to be recognised as the creators of some of the most sought after teddy bears and other collectable soft toys in the world, and to be valued for their artistic contribution to the company,” she says.

The company says that each creation is marked with the seamstress’s initials and is a display of her inspiration and dreams for the future. The work gives her financial security and the ability to transform her own life and that of her family.

When you receive a Taunina soft toy, the idea is that you are exposed first-hand to global and social issues, prompting a desire to change the world. “The unique beauty of each collection piece lies in how it transforms the life of the woman who made it and establishes a lifetime connection between the artist and the purchaser,” adds Chiappini-Young.

Taunina also believes strongly in education, and children of some of the staff are at school in Cape Town, where they can keep a close eye on academic progress, offering support or intervention if needed.

Taunina is a new company, but the founders have no doubt that it will be successful. The toys are sold online and in only three places – at the Taunina shop in Woodstock in Cape Town, at the exclusive children’s store, Bundle, in New York, and at New York’s iconic luxury department store, Barneys. They will be available at Harrods in London soon.

“While we are working away in our studio in Cape Town, we love to daydream about where our bears will be travelling to, who they will meet first,” says Chiappini-Young.

It was recently announced that the Taunina collection will be included in Barneys Easter display. The collection made its New York City debut in September 2012 at Bundle, and flew off the shelves within a week. Taunina will release its home décor range in April.

The toys are also available for sale online at www.taunina.com, www.bundlenyc.com and www.barneys.com.