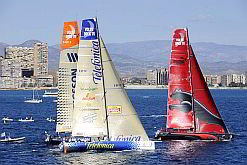 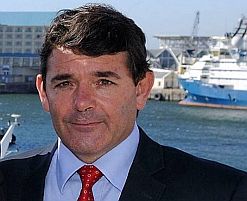 Bruce Parker-Forsyth, CEO of
World Sport, said he is encouraged
by the opportunities that are opening
up for Western Cape business in
Abu Dhabi and the role the Volvo
Ocean Race will play in introducing
new players into the UAE market.
(Image: Worldsport)

Worldsport, a Cape Town-based events management company, has been chosen to organise the stopovers of the 2011/2012 Volvo Ocean Race in both Abu Dhabi in the United Arab Emirates (UAE) and the Mother City.

The local company has managed the race’s stopovers in Cape Town for the past four years, but will facilitate the Abu Dhabi stop for the first time following the latter’s recent selection as a host port.

In 2010 the Mother City, as Cape Town is affectionately known to South Africans, was announced as the first port of call for the 2011/2012 race. The race starts on 29 October in Alicante, Spain, and will end on 3 July 2012 in Galway, Ireland.

Bruce Parker-Forsyth, CEO of Worldsport, said: “I am encouraged by the opportunities that are opening up for Western Cape business in Abu Dhabi and the role the Volvo Ocean Race will play in introducing new players into the UAE market.

This year will be the eighth time Cape Town has featured as a stopover port for the race.

“As the past few stopovers have proved, the race is a superb platform to achieve business tourism and sporting objectives for Cape Town and the Western Cape.”

During the 2008 race stopover, the city hosted 30 000 visitors overnight and generated an estimated R308-million (US$44-million) for Cape Town and the Western Cape province, according to Pieter Cronjé, director of communications for the city.

Worldsport will be working with a R349-million ($50-million) budget to host the Abu Dhabi stopover.

Cape Town’s mayoral committee member for tourism, events and marketing, Councillor Grant Pascoe, said: “We have committed ourselves to make the Cape Town stopover a memorable experience for the participants, tourists, corporate visitors and media.

“This stopover has become an integral part of our focus to sustain and grow Cape Town’s sport tourism industry.”

Western Cape Premier Helen Zille, who was part of a delegation that went to support Worldsport’s bid to become the stopover operator in both cities, said the outcome proved Cape Town’s strength in exporting services.

Pascoe added: “I believe the trade delegation which visited the United Arab Emirates in December 2010 convinced the authorities in Abu Dhabi that they can confidently do business with Cape Town, across a range of spheres.

“The involvement of Worldsport in the Abu Dhabi stopover will be the beginning of many other ventures with the UAE.”

Cape Town has been in the spotlight all year, with the city and individuals living there scooping a number of prestigious awards. It has also been recognised as a leading destination capable of hosting major global events.

The city will use the Volvo race stopover to highlight a number of initiatives, including the Table Mountain World Heritage nomination, Cape Town Green Goals, the World Design Capital 2014 award nomination, youth development and volunteering.

Table Mountain is also one of 28 finalists in the New 7 Wonders of Nature competition. Although the final voting round for this will take place before the Volvo boats arrive, the race will be used as a platform to boost the city’s chances of winning.

Volvo’s environmental education drive, Save our seas, will be intertwined with the city’s Green Goals initiative.

The race will be used to highlight Cape Town’s bid to be named the 2014 World Design Capital award. This award is given to cities that use impressive design for their social, economic and cultural development.

Volvo has opened a sailing academy in Cape Town, and this will be used to show that the city is serious about developing its youngsters.

The gruelling Volvo Ocean Race, described as the Everest of Sailing, was initiated in 2001. The route covers 39 000 nautical miles of the world’s most treacherous seas and takes nearly nine months to complete.

Every vessel consists of a crew of 11 whose skill, physical endurance and competitive spirit are put to the test as they race day and night for up to 20 days at a time.