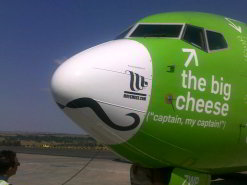 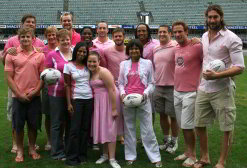 The Sharks provincial rugby team wore
a limited edition pink strip during one of
their Currie Cup games, to show their
support for Cansa.
(Image: Sharks World)

The Cancer Association of South Africa (Cansa) marked World Cancer Day, 4 February, with the launch of a declaration calling governments to action in stepping up the fight against the disease, thereby reducing the global burden by the target year of 2020.

The World Cancer Declaration was first promoted at the 2006 World Cancer Congress in Washington DC and revised in 2008, but 2011 sees it launch in South Africa for the first time. It’s designed to bring the global cancer crisis to the attention of policymakers, and to increase awareness of the disease and ways in which to not only treat it, but prevent it.

“Cancer is a non-communicable disease, just like diabetes or heart disease,” said Cansa CEO Sue van Rensburg, herself a cancer survivor, “and currently is responsible for about 40% of all deaths worldwide.”

This figure is more than the combined victims of HIV/Aids, malaria and tuberculosis.

She added that despite this statistic, just 10% of the global health budget is devoted to research and management of non-communicable diseases. At least 40% of cancers are preventable, and about 90% of them are caused by our environment.

“In order to live in a cancer-free world we need the help of leaders, because they make the policies,” she said.

The declaration was adopted by all parties at the 2008 World Cancer Congress, held in Geneva.

White took the opportunity to hand over a generous cheque for R80 000 (US$11 000) to Cansa – the money was raised from the 2010 sales of Telkom’s Palmtalk Flip digital cordless phone.

“We have always striven to balance our responsibility to our shareholders, consumers and the community,” said White, “and we are pleased to be a part of this initiative.”

Those interested can read more about the declaration on Cansa’s website. The declaration’s text may be read online, or downloaded (PDF, 61KB).

A volunteer-based and community-driven organisation, the Cancer Association of South Africa celebrates its 80th anniversary in 2011. Established in 1931 by a concerned group of medical professionals, the organisation now operates 45 offices around South Africa, with a permanent staff of 260 and a 12 000-strong volunteer corps.

Cansa’s mission is to drive cancer research by funding scientists, to educate citizens about cancer, and to provide support to those who need it.

The organisation runs a number of special projects, such as the annual Shavathon, where participants show solidarity with cancer patients by paying a fee to have their heads shaved or spray-painted – the 2010 event raised an impressive R5,8-million ($796 000); the Cuppa for Cansa, which invites workplaces, clubs or individuals to host a tea party and ask guests to make a donation; and the Sanlam Cancer Challenge golf tournament.

Cansa also runs the popular Movember initiative, which originated in Australia. Movember encourages South African men to grow a moustache during November while raising awareness and funds for cancer-related men’s health. To show its support for the 2010 campaign, the irreverent kulula.com airline sported a moustache on its famous Flying 101 craft.

Cansa is affiliated with the breast cancer support organisation Reach for Recovery.