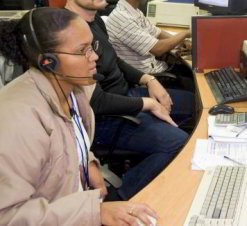 Women in the private sector have a
way to go to catch up with the progress
their peers in the public sector have made.
(Image: MediaClubSouthAfrica.com. For
more free photos, visit the image library)

South African women are making strides in the country’s private sector in terms of taking up senior positions, according to a recent international survey.

The 2012 Grant Thornton International Business Report, which surveys trends in privately held businesses in 40 economies around the world, stated that 28% of senior management positions in South Africa were held by women.

This is higher than the global average of 21%.

Grant Thornton’s corporate finance head in Johannesburg, Jeanette Hern, said that this strong representation is indicative of the country’s progress towards gender equality.

The percentage actually indicates an improvement from 27% last year. However, it falls just short of 2007’s figure of 29%.

Hern said, however, that more needs to be done for that figure to increase.

“We need more innovative solutions in order to make a significant dent in the number of women still excluded from senior management,” she said.

Also, the research found that women were not represented across a spectrum of management roles. Most were either human resource or finance directors.

Just 8% of CEOs and 9% of COOs were women but according to Hern, this is an improvement from 2011, when only 3% of women held positions at these levels.

Women have progressed, but can progress more

According to Masimanyane Women’s Support Centre’s executive director, Lesley Ann Foster, the exact number of women in leadership roles should be taken into consideration when analysing such statistics.

Foster says that taken in context, the figures leave much room for improvement – but acknowledged that women have progressed in the past decade and they have occupied many senior positions, although not yet to a satisfactory degree.

“Women make up 53% of the population so they should at least take up 50% of leadership positions but this is not happening,” she said.

Foster was clear about the benefits that equality between men and women will have on society. She said that in a society where women are on an equal basis with men progress is quicker, the standard of living is higher and quality of life improves.

“Women bring a lot of expertise and value to life,” she said. “If a woman works, the whole family and the community benefit. To be on par with men, women should receive decent work, decent pay.”

Private sector must catch up

Foster referred to studies done by the Businesswomen’s Association of South Africa (BWASA) in 2010, which stated that there are millions of women who are either unemployed or earn very little.

She also said that there are not enough women from previously disadvantaged backgrounds in leadership positions.

BWASA East London’s chairperson, Lizelle Maurice, agreed with Foster’s sentiments, saying that while women have progressed tremendously in the public domain, with 47% being represented in government, they are still lagging within the private sector.

When speaking of ways to ensure women are given a greater chance to participate within business, Maurice said: “Black economic empowerment status should also have a gender component.”