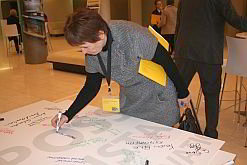 At the end of the IMC’s stakeholder
summit held in Brynston, Johannesburg,
delegates signed a pledge to help drive
the country’s brand. 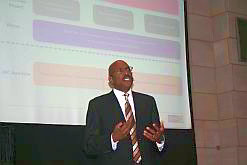 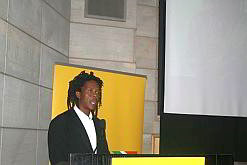 Isaac Nkwe founder of Imfundiso Skills
Development Project, spoke to delegates
about finding opportunities to empower
themselves and the country.
(Images: Nosimilo Ramela)

The International Marketing Council (IMC) of South Africa took bold steps towards positioning the country as a globally competitive nation with a stakeholder summit on 31 May 2011 in Johannesburg. The event was the first of nine such meetings that will be held in each province to raise awareness of the nation brand and increase active citizenship among South Africans.

Speaking at the summit, IMC CEO Miller Matola said it is important for everyone to understand the country’s brand and align what they do as the people of the country to the brand. “We need to have a consistent identity as a country to allow us to promote and sell the country internationally.”

The IMC has identified four pillars that distinguish the unique characteristics of the South African brand – these are ubuntu, diversity, sustainability, possibility and creativity. Matola said these could be applied in different ways to how South Africans go about their day-to-day lives.

Key speaker Deputy Minister in the Presidency Dina Pule said it was important for the country to have a compelling brand, as this would boost country’s rating internationally.

An estimated 150 delegates representative of business, media and the general public attended the summit.

“The branding of South Africa is not a choice, but a necessity. Only a country with a clear, credible and positive view of what it is, what it represents and where it is going to, can successfully compete on the global stage,” Pule said.

The deputy minister complimented the IMC’s countrywide campaign, saying: “The campaign has defined the values that make South Africans unique, while entrenching the principles of pride, patriotism and solid citizenship that were established during 2010.

“This will ultimately contribute to the country’s rating in international competitive studies in that we don’t only just “write” about “how” citizens should behave, but actually influence the desired behaviour we want people to adopt in achieving desired goals,” she said.

Isaac Nkwe, founder of the Imfundiso Skills Development Project, spoke at the summit as an embodiment of the pillar of possibility.

After graduating from Tshwane University of Technology (TUT), Nkwe joined Arthur Kaplan Jewellers as a designer and in 2000 he helped establish the Atteridgeville Jewellery School.

A year later he collaborated with mining house De Beers, the Department of Minerals and Energy and TUT to start the Imfundiso project. The initiative offers two-year learnerships to unskilled, unemployed and inexperienced young South Africans, and six-month learnerships to graduates from jewellery schools.

Through the courses students learn how to produce quality jewellery and craft that can then be sold for profit.

The project has seen hundreds of students from around South Africa graduate from jewellery-making courses and go on to launch successful careers.

Nkwe said: “The problems we have as the people of this country are not just the state’s problems to fix. We realised that we can and should do something about them too. So we started looking for opportunities to help ourselves. Nothing is impossible in this country.”

Nation branding is a managed process of identifying what a country promises and delivering on that promise, said IMC board deputy chairperson Chichi Maponya.

She said a nation’s brand is key to its success irrespective of whether it is an advanced or developing economy.

“Nation branding can close the gap between rich and poor nations. It is no coincidence that countries that are very good at branding are also the wealthiest.”

Maponya said a nation brand can be a critical determinant of how well a country competes for its share of investors, consumers and visitors in a global economy.

“A country’s image as a strong and reliable player in global economic affairs and a hospitable place to visit makes it desirable to live and conduct business there, thereby attracting business partners and qualified professionals.”

‘Our brand is our only arsenal’

Kuseni Dlamini, CEO of Old Mutual South Africa Emerging Markets, told delegates at the summit that it was time to stop complaining as South Africans and start working on the country’s brand.

“We need to be positive and work on building our country’s brand in our everyday life in everything we do and say wherever we are. We need to find the right solution and use our brand to build our country so we can reach our developmental goals.”

He said building the brand would help to boost confidence among foreign investors. This would then raise investment opportunities for the country and increase employment.

At the end of the summit all delegates signed a pledge to uphold the core South African values and help drive the brand forward. 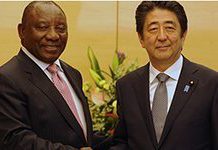 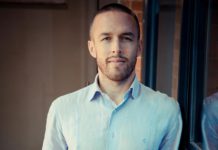 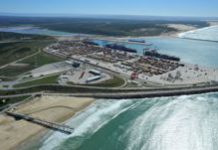 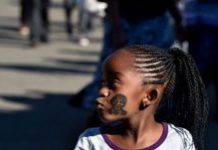 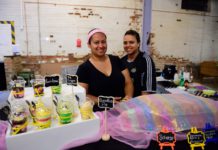