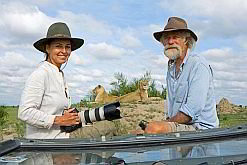 Beverly and Dereck Joubert are wildlife
documentarians who are passionate about
the conservation of big cats in the wild. 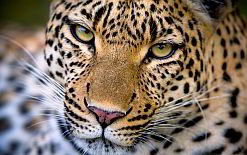 Legadema, the leopard, is the star of
the Jouberts’ documentary “Through
the eyes of a Leopard”.
(Images: Beverly and Dereck Joubert)

The African bush and all its beauty have been brought to central London in the form of a two-month photographic exhibition, Visions of Africa, made by award-winning wildlife filmmaking and conservationist couple Beverly and Dereck Joubert.

The exhibition opened at the National Geographic store on Regent Street on 5 July 2011 and will run until 5 September.

The launch of the exhibition coincided with the introduction of two new National Geographic DVDs by the Jouberts, Big Cat Odyssey and Lions of Darkness.

Big Cat Odyssey documents the Joubert’s 30 years of filming big cats and Lions of Darkness looks at the challenges facing a growing pride of lions.

Another DVD, Ultimate Enemies, will be released on 14 August 2011. It’s a compilation of three films made by the couple: Ultimate Enemies, a film about a pack of lions which have learnt how to hunt elephants; Eternal Enemies, about the territorial battles between hyenas and lions; and Relentless Enemies, which documents how lions hunt indomitable buffalo.

Dereck said: “When we went out into the wilds of Africa we needed to understand the ecosystem by looking at the top predators. There cannot be a more ‘top predator’ than the lion, as they give you a good idea of how everything else works.”

Beverly added: “We try to create awareness of how quickly we are losing these cats – we could lose them in 15 years. We do not want to be chastising nations or cultures, but we cannot be shooting lions when the animals are in decline.”

For their efforts over the years the couple have won numerous accolades, among them five Emmys and the World Ecology Award.

The recent launch included an auction of Beverly’s photographs of Legadema, a female leopard the Jouberts have followed since she was eight days old.

Legadema is Setswana for “the light from the sky”.

The Jouberts have also made a documentary of Legadema’s life, entitled Through the eyes of a Leopard.

As a cub left alone while her mother was on hunts, Legadema quickly learned to survive the perils of the wild.

The young cat practised her hunting skills on squirrels and made her first kill at five months when her mother brought her a live impala.

Legadema and her mother became separated after an incident when the young cub interfered with her mother’s hunt, leaving the hyenas to capture the prey.

The growing Legadema soon became independent and one day managed to kill a baboon, which was carrying its young. In an intriguing twist, the leopard temporarily adopted the orphaned ape and nursed it through the night, picking up the tiny animal every time it fell from the tree.

Although Legadema protected the young baboon from other predators, it didn’t survive the night, as it was too weak to live without its mother.

This encounter with the baby baboon was documented by the Jouberts and published online, earning Legadema instant internet fame.

The Jouberts are now planning to document the next chapter of Legadema’s life as a mother of two cubs.

King of the jungle nearing extinction

According to Beverly, large numbers of big cats have been wiped out over the last 50 years, making their conservation a top priority.

Dereck said: “The way we go about life is to be part of the planet. Most people are divorced from the planet and we are trying to mend the relationship for all of us.”

Having worked in Botswana for many years, Beverly commended the country’s policy on protecting its wilderness.

The couple have also partnered with National Geographic to establish the Big Cats Initiative to find ways of protecting big cats in the wild.

“We no longer have the luxury of time when it comes to big cats, if there was ever a time to take action, it is now,” said Dereck.