Youth Month may be over for another year, but the bright young minds at the Council for Scientific and Industrial Research are not resting. Lydia Cape’s passion for the outdoors has made her a valuable environmental scientist and environmental assessment practitioner at the institute. 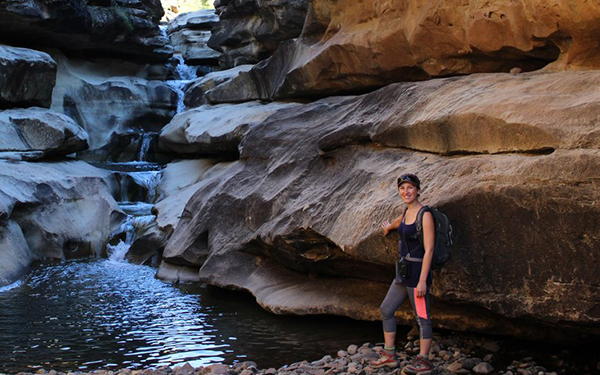 Lydia Cape has a passion for nature and the outdoors, so she took that passion and made it her career at the CSIR. (Image: Supplied)

Lydia Cape’s love for science stems from childhood. Her parents were enthusiastic outdoor adventurers – hiking, walking, swimming, and cycling in national parks and natural spaces – and examining her surroundings made the young Cape think. She would ask her parents questions such as: “Dad, why are the plants green? Dad, where is the sun during the night? Mum why is the sky blue? Mum, why is your hair orange and mine brown?”

They supported her curious nature and now the 27-year-old is an environmental scientist and senior environmental assessment practitioner (EAP) at the Council for Scientific and Industrial Research (CSIR).

Cape says specialising in the environmental field was a natural evolution from her. “After my BSc in biochemistry I knew for sure that I would never be able to be locked in a lab all day, every day,” she explains. “Spending hours in the office is already hard when the sun is shining and the wind dances in the tree branches outside my window!”

She heard about the CSIR through the Commonwealth Scientific and Industrial Research Organisation (CSIRO). She had collaborated with the establishment on her MSc thesis research project in Australia at the University of Adelaide. When she returned to South Africa in 2010, she applied to fill a vacancy for a junior EAP.

Of her job, she says: “I have the chance to work with an amazing team of environmental scientists, engineers and planners.”

The life of a scientist

Cape says there is something new every day at work. Some days she sits at the office analysing research and writing reports to investigate the impact of various projects; other days she presents at conferences, seminars or workshops, or gives the odd guest lecture at a university. She may attend meetings with the Department of Environmental Affairs (DEA) or venture into published reviews to extract information on previous research.

“Sometimes I am doing fieldwork, like a site visit to see the ecological features of the proposed sites for the projects under investigation.”

Currently, she and a team of scientists are working on the national Strategic Integrated Projects. These large-scale infrastructure projects are of national importance and are aimed at unlocking development potential in South Africa. Cape managed the strategic environmental assessments for solar energy, the findings of which were submitted to the DEA for review and further submission to the Cabinet for approval and gazetting.

“The main objective of the project was to identify areas where large scale solar energy facilities could be developed in a manner that limited significant negative impacts on the natural environment, while yielding the highest possible socio-economic benefits to the country,” she explains.

Cape loves that her jobs allows her to work in different countries with various people. She has experienced the different ways people think about the environment, and how they approach sustainable development based on their cultural background and personal development.

South Africa is a land of abundant opportunities and women in the country are ambitious, she says, so it is the perfect combination for success. She encourages all women who have a love of science to pursue their passion. “There is definitely space for successful women scientists in this country and all the female-scientists I know and have met in South Africa are respected and well-integrated in the professional environment.”

The challenging aspect of her work so far has been trying to make a lasting change when it comes to conservation and the environment. “I am trying to encourage the transition to sustainable development through my work at the CSIR as well as [in] my personal life.”

An estimated 100 plant and animal species are lost daily because of habitat loss, fragmentation by deforestation and urbanisation, Cape points out, and she wants to stop this destruction. “We need to understand that by losing more species on the Earth we are threatening all species, including Homo sapiens.”

As part of her passion and her work, Cape is up-to-date on scientific publications on climate change scenarios and possible adaptions. “The personal feeling that I get is that in 100 years, life on Earth will be closer to ‘survival behaviour’ rather than ‘wealthy development behaviour’.

“Let’s consider all potential futures to put all our efforts together now so that the dramatic scenarios can be prevented and positive scenarios become a reality, for the generations to come.”

South Africa is the 12th largest emitter of CO2 emissions in the world, she explains. Those emissions mainly come from burning coal for generating electricity, as well as from using petrol and diesel for transport. On a national scale, the country has started to source renewable energy facilities, but every citizen can also do their part in small ways: by recycling, using organic waste as compost, switching to compact fluorescent or LED light bulbs, and planting trees in gardens.

When she is not working, Cape loves to run with her dog or go hiking with her husband and friends, or simply read in her garden on a sunny day. She is a hiking enthusiast: “My husband and I summited the Mount Kilimanjaro in August 2012, and we did the stunning five-day hike in the Torres del Paine in Patagonia, in South America in 2010, plus many other hikes in South Africa.”

Outside her active lifestyle, she enjoys singing, dancing, and painting – her mother is an art teacher and a painter.

If Cape was able to meet one inspirational person, it would be Kenyan political and environmental activist, and Nobel Peace Prize winner, the late Wangari Maathai.

“If Maathai came back to life for just one day, we would go for a walk in the forest and I would ask her to share her life experience from her childhood in the village of Ihithe, to her appointment as the first female senior lecturer at the University of Nairobi, to the foundation of the Greenbelt Movement and many more achievements.”

Cape would also ask Maathai how she got the strength and ambition to fight for the preservation and restoration of the forests in Kenya, her inspirational actions towards sustainable management of the environment, and the rights of women to grow in the professional space across generations.

She is grateful to her parents for instilling a love of knowledge and books in her, Cape says, describing them as her wings during her travels through the discovery of life sciences.

“My parents have always been extremely supportive [of] my scientific interest,” she shares. “They would spend hours chatting with me about all sorts of topics, and bought me several educational books, from the description of the human body to photosynthesis to geology to the big bang.”

In fact, so laden was the Cape home with literature, “we always had a room for my dad’s books,” she exclaims.