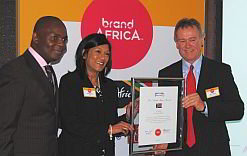 Anitha Soni (middle) from the IMC
received an award of brand recognition
for South Africa. 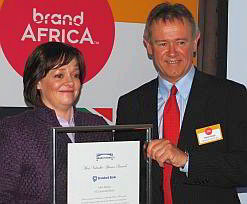 South Africa has been awarded the title of the most valuable nation brand on the continent, with its recent inclusion in the Bric economic bloc and successful hosting of the 2010 Fifa World Cup contributing to strong positive perceptions – both locally and abroad.

Anitha Soni, chairperson of the International Marketing Council of South Africa (IMC), received the accolade from UK-based Brand Finance on behalf of the country at the launch of the Brand Finance African Nation Brand League in Sandton, Johannesburg, on 25 May 2011.

“This honour underlines the progress the country has made,” Soni said.

The rating by Brand Finance’s Global Nation Brands League takes into account the GDP revenue that a country generates.

Egypt is the second most valuable nation brand in Africa, while Nigeria takes third place and is followed by Morocco, Algeria, Angola, Tunisia, Ghana, Kenya and Libya.

Brand Finance pointed out that the sophistication of infrastructure is what makes Africa’s best three nation brands some of the world’s serious competitors.

Hosting the 2010 Fifa World Cup helped South Africa set up some impressive facilities, from which it’s poised to benefit from in future.

And the World Cup itself did wonders to enhance the country’s image. “The world saw us and saw what we can do,” said Soni.

Joining the Bric economic bloc – previously comprising Brazil, Russia, India and China – has come at the right time for the nation, which is bracing itself for further economic growth. With the inclusion of South Africa, the group is now referred to as Brics.

“Brics is a powerful new platform for promoting economic growth throughout Africa. This is a further recognition of South Africa as an important emerging country in its own right,” Soni said.

The IMC is now aiming to make the country one of the top 20 most valuable nation brands in the world. South Africa is currently in 41st position.

According to Brand Finance’s Global Nation Brands League, the top three most valuable nation brands at the moment are the US, Germany and China respectively. Brazil and India are also in the top 10.

The positive perceptions of the country are also a driving force in the growth of the tourism sector. “South Africa has become one of the fastest growing tourism destinations in the world,” said Oliver Schmidt, managing director at Brand Finance South Africa.

But it’s not just tourism that’s benefiting from the country’s glowing brand – the entire private sector is scoring too. As Brand Finance CEO and founder David Haigh said: “There’s no doubt that nation-branding contributes to the perception of South Africa’s products.”

The top three most recognised corporate brands on the continent are South African. MTN is number one, while leading banks Absa and Standard Bank are second and third respectively.

MTN is the 199th most valuable brand in the world and the only African brand to be included in Brand Finance’s top 500 rankings.

The telecommunications group has seen major growth since being established in South Africa 17 years ago. It now operates in 21 countries in Africa and the Middle East, and its services connect over 120-million people.

“It’s big thanks to my colleagues,” said Christian de Faria, the group’s senior vice-president for commercial and innovation.

Brand Finance tips Standard Bank, which now ranks 510th, to break into the world’s best 500 in the coming years. “Standard Bank is one of the contenders”, Schmidt said.

Brands of locally made goods are finding their place onto international markets, said Soni. “South African brands take their place in the global arena. We’ve taken ourselves into the international arena at every level.”

All but one of the most valuable corporate brands ranked in the top 10 are from the US. The exception is UK-based Vodafone.

South Africa has positioned itself as a gateway to the African continent for investors. The IMC’s aim is for South Africa to become a reflection of the continent.

“Our role in Africa must contribute to the growth of the continent in entirety,” said Soni.

In coming years “people will know that the African agenda is driven by Africa,” said Thebe Ikalafeng, founder of the Brand Leadership Group.

“If South Africa does well, the whole continent does well as well,” Ikalafeng added.