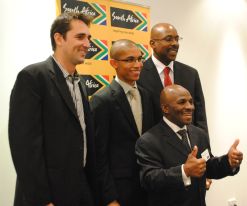 Inspiring New Ways, Brand South Africa’s new slogan, was launched on Wednesday 4 July at a dinner in Midrand, Johannesburg. The occasion was marked with the screening of an innovative television commercial filmed locally and abroad, featuring some of the country’s most influential people across all fields, from sport to technology.

This comes as a natural progression from Brand South Africa’s previous slogan, Alive With Possibility, which was used to define the company’s role in marketing the country.

Miller Matola, Brand South Africa’s CEO, believes the 60-second commercial encapsulates the “can-do” spirit of South Africans. He trusts that it will illustrate the determination of the country’s citizens to overcome obstacles and find new and better ways to get things done.

The spirit of South Africans was captured in the ad. Instead of looking for a single example of this, the makers decided to get some well-known and not-so-well-known citizens to talk about it in their own words.

It begins with Baby Jake Matlala saying: “They told me I was too small”, and continues to feature other prominent figures before ending off with musician Toya Delazy and comedian Trevor Noah together saying: “We don’t think we can change the world – we know.”

Matthew Barnes, the executive creative director at Publicis, the agency that made the ad, said: “The mix of characters in the commercial was chosen from a long, long list. While some of the people we wanted to include were not available, we were extraordinarily fortunate to get some of the people who star in the final product.

“We did not just go for people who have won world cups and major awards and trophies. We wanted to show a spread of people, demonstrating the breadth and depth of the South African can-do spirit,” Barnes said.

The team had to film at various locations in South Africa and in Los Angeles. The latter was to show some home-grown talent that had made it big internationally, such as Rabin. The musician became an international rock star with bands like Rabbitt and Yes; he now composes and produces soundtracks for Hollywood movies.

Others filmed in Los Angeles were Noah, the multi-lingual comedian; Tomson, who was at the top of world surfing for many years; and Minnaar, a multiple world mountain bike champion.

Moses Semenya, the assistant direct at Catapult, which produced the commercial, said: “Whether we were filming at home or in the US, we were struck by the humility and down-to-earth nature of the people we filmed and their absolute willingness to participate in the project and give something back to their country.”

Semenya explained that to describe the ability of South Africans to find new ways of doing things, the first half of the commercial explores negatives, which are turned into strong positives and successes in the second half.

The television commercial will be aired on e.tv on 5 July about 8:30pm, before moving to SABC channels and MNet; then it will make its way on to international media. But this is only the beginning; the people in the commercial will later be featured in stand-alone segments.

“Through this television commercial we want to get across the message that Inspiring New Ways is an over-arching country position for South Africa relating to everything we do and that we are including our people, our culture and heritage, tourism, exports, governance and investment and immigration,” Matola said.

“Since our hugely successful hosting of the 2010 Fifa World Cup, our inclusion in the Brics [Brazil, Russia, India, China and South Africa] grouping of nations and in the G20, South Africa has matured a lot and come of age to a large degree.

“We are no longer an adolescent nation and this progression needs to be reflected in our brand identity and positioning.”

Matola added that the South Africans featured in the ad characterised the quintessential spirit of the country as they found ways to realise their dreams and achieve their goals.

“Whether it’s Baby Jake Matlala proving that he was not too small to become a world champion boxer, or Oyama Matomela becoming a commercial pilot at the age of 19, or astronomer Simon Ratcliffe who helped to bring the Square Kilometre Array project to our country, these people all portray the essential spirit of South Africa and South Africans.”

The people featured in the ad had all found ways to get ahead, improve themselves and make a contribution to society, he added. “At Brand South Africa, we want to inspire all South Africans to play a role in shaping the future of our country.”

The path since democracy

Inspiring New Ways was devised to reflect how far the country has come over the past few years since its democracy and the increasingly significant role it is playing in international affairs.

South Africa has not only been the only African nation to host a football world cup, but it has also become a leading force in the African Union, Southern African Development Community, New Partnership for Africa’s Development, Brics and G20.

Nomsa Chabeli Mazibuko, Brand South Africa’s strategic marketing and communications director, said: “In many ways, we punch above our weight in international affairs and we also occupy a strong representative position on behalf of Africa, the developing world and emerging market economies.

“We have our own challenges as a country, especially with regard to issues such as education, poverty, inequality and corruption, but we as South Africans have demonstrated that we will be inspired to find new ways to overcome these challenges.”

More importantly, Chabeli Mazibuko said, Brand South Africa wanted Inspiring New Ways to be a slogan that was aspirational and created a vision of where people wanted to be.

“The slogan and television commercial is a call to action for South Africans to find new and better ways of doing things for the benefit of themselves, their communities and the country as a whole,” she added.

Entertainment at the launch included Yvonne Chaka Chaka, who performed three songs; Mi Casa, and a children’s choir. Chaka Chaka took her music to the floor as she walked through the crowd while singing, encouraging people to dance by grabbing some of them by the hand. They let loose after that and by the time Mi Casa went on stage, they swamped the dance floor without any encouragement from the band.