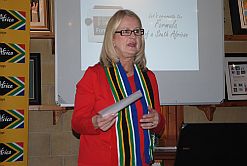 Barbara Holtmann of Bluprints said the Formula SA initiative has the potential to shift the perception of South African’s being a complex bunch and bring us together. 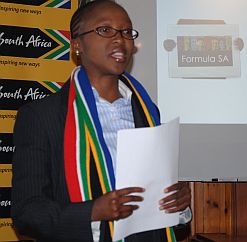 Brand South Africa’s marketing and communications director Nomsa Mazibuko appealed to South African’s to take part in what is possibly the most comprehensive cultural development initiative in our history.
(Images: Ray Maota)

What does it mean to be a South African? Brand South Africa, together with the Department of Arts and Culture, is trying to find the answer.

In a world first, the search is on for the Formula of a South African (FormulaSA), a unique equation that looks at the country’s progress since the inception of democracy and into a future that all would be proud of, based on the values, beliefs and wishes of its citizens.

Brand South Africa and Arts and Culture have enlisted the help of Bluprints, a company that specialises in discovering the DNA of organisations.

A national conversation was launched in 2011 by Minister of Arts and Culture Paul Mashatile to discover South Africa’s collective value system.

Over the past few months the Bluprints team has been assessing what it is that – despite many differences – makes the people of this country South African. A progress report was presented in Johannesburg on 27 June 2012 by, among others, Brand South Africa’s marketing and communications director Nomsa Mazibuko and Bluprints’ Barbara Holtmann and Guy Martin.

“This process is not about what government does,” Brand South Africa CEO Miller Matola said in a statement. “It’s about what we are all going to do and there’s a clear path we need to follow to co-create the country we want to be part of.”

“South Africans are being asked to engage in what is possibly the most comprehensive cultural development initiative in our history. We really have the opportunity to inspire new ways in the world,” Mazibuko said.

More than 65 000 South Africans shared their opinions via an online campaign on what citizens need to do more of, and less of, to succeed. A further 11 400 responded to a campaign by the Department of Arts and Culture – South African at Heart – what values the nation should subscribe to.

What emerged was that South Africans have more in common than was suspected.

“We have got opinions from every corner of South Africa and are amazed at the similarities in responses. We share much more than what divides us,” Matola noted.

What the formula entails

FormulaSA seeks to understand what individuals need to do to make the country a better place for all to live in.

There are four phases to the formula: intuitive opinions; elections; art production and scoring.

Phase one has just been completed. Under this intuitive opinions phase, South Africans identified 21 top line (do more of) and 19 bottom line (do less of) characteristics. The top line included virtues such as accountability, mutual respect, innovation, environmental responsibility, as well as pride and passion.

In the bottom line were crime, laziness, racism, poor communication and resistance to change.

The second phase, the election process, runs until 12 July, and involves narrowing down the characterists.

Members of the public can vote online at www.formulasa.co.za www.facebook.com/FormulaSouthAfrica or via their mobile phones at wap.formulasa.co.za. Those without access to the internet will be approached via various NGOs to complete a questionnaire.

Another one million people will be able to vote via SMS, in response to a system-generated message that will be sent to them. This group has been selected on the basis of age, race, gender and geography by virtual prepaid token distribution company Bluelabel Telecoms.

The final formula, which will be determined by the election results, will be expressed in an array of art forms reflecting the cultural diversity of our nation.

The department will select and coordinate artists to convey the message of the formula, which will be unveiled in its final form before the end of 2012.

In the spirit of consistency, an annual scoring process will be developed by Brand South Africa and the formula will be measured for improvement. The goal is to create a more successful society. Every year, citizens will be asked to rate how they believe each behaviour in the formula is being lived.

Whose view does FormulaSA express?

The process is a civil society initiative and the objective is to carry out the survey every year, irrespective of the government of the day. It is not about what government does but rather about what citizens do to ensure they live in a society they want.

“We’re a complex bunch and that notion of ourselves as diverse and multicultural sometimes translates as a handicap,” Holtmann said.

“There is an abiding fear of the other; that our most narrowly defined definitions make it impossible for us to understand one another. We want different things for ourselves and for our children cause we are different.”

Holtmann added that the initiative has the potential to shift this perception and bring us much closer.

“Rural, urban, rich, poor, old and young, men and women have had their say and what emerges is not the differences, but the similarities of our hopes, dreams and aspirations of who we might be if we do more of the positive and less of the negative things that define us.”