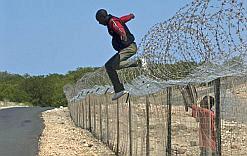 Images like these of people entering the
country illegally will hopefully be eliminated
with the deployment of more soldiers at
borders.
(Image: The Zimbabwe Situation) 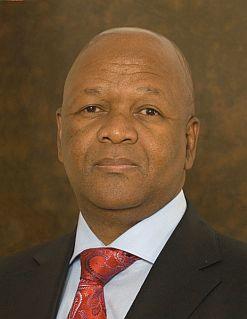 Minister of Justice and Constitutional
Development, Jeff Radebe, said that
effective border management is part of
the government’s crime prevention strategy,
which helps to deal with cross-border
crime syndicates and curb poaching.
(Image: Department of Justice
and Constitutional Development)

Four more military companies have been deployed at border posts by the South African National Defence Force (SANDF) in an effort to tighten up border control.

This brings to 11 the number of border control companies manning South African borders. They have been deployed to help stop poaching and cross-border syndicates.

A military company consists of 150 soldiers, which means the country’s borders are now being manned by 1 650 soldiers.

Jeff Radebe, the minister of justice and constitutional development, said: “Effective border management is part of the [government’s] crime prevention strategy, which assists to deal with cross-border crime syndicates and curb poaching.

“The deployment includes army engineers who are conducting repairs and maintenance on the Zimbabwe/Mozambique border fence, which is approximately 140km [long].”

Soldier deployment is taking place in phases and in conjunction with other role players, such as the police, South African Revenue Services (Sars) and the departments of Home Affairs, Tourism, Public Works, Transport, Health, State Security and Agriculture.

“As part of this deployment, operations are being conducted to combat cross-border crime, stock theft and illegal grazing, as well as rhino poaching in the Kruger National Park,” said Radebe.

The operations had been successful, and 13 poachers had been apprehended already, the minister said.

“These deployed companies have confiscated contraband to the value of more than R16 million (US$2.1-million) in the financial year 2011/12. It included 7 593kg of dagga and 453kg of copper.”

Border control anti-crime efforts can account for the recovery of 522 head of cattle and 737 head of small stock. In addition, 14 000 undocumented foreign nationals have been apprehended, 51 stolen vehicles recovered and 36 criminals arrested.

According to Radebe, the decrease in rhino poaching in the Kruger National Park can be attributed to the presence of SANDF soldiers. However, he said poachers were changing tactics and instead targeting private parks but that “law enforcement agencies are collaborating in dealing with this challenge”.

Efforts to stop rhino poaching have intensified over the years as the species has come closer to extinction. Already this year, 52 rhinos have been poached and 30 people arrested throughout South Africa, according to SANParks.

The agency, South African National Parks or SANParks, manages a system of national parks that represents the indigenous fauna, flora, landscapes and cultural heritage of the country.

It says that 448 rhinos were killed for their horns in 2011. The hardest hit areas continue to be the Kruger National Park and Limpopo Province, where 26 and 13 rhinos, respectively, have been poached already this year.

SANParks’ chief executive, Dr David Mabunda, said: “The most encouraging area in this whole saga is the increasing number of arrests and the steeper sentences that are being imposed on convicted criminals.”

On 28 February 2012, four SANParks officials were arrested for rhino poaching.

“It is a very sad day for South Africa to find out that the unscrupulous and revolting hands of the poaching syndicates have stretched as far as to taint the hands of those trusted with the great responsibility of being guardians of our natural heritage.”

According to Mabunda, there are about 22 000 rhinos in South Africa, accounting for 93% of the world’s rhino population.

Experts say the spike in poaching in Africa and South Asia has been caused largely by increased demand for rhino horn in Asian traditional medicines.

Many people in Asian countries, such as China and Vietnam, believe that the horn can heal fever, enhance sexual performance and reduce the chances of stroke.