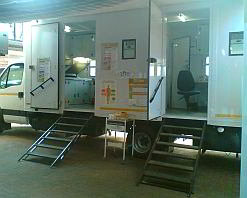 Trucking Wellness is hoping to test 20 000
people a year with the 10 new mobile
centres donated to them.
(Image: geva.co.za)

The clinics – made possible by the Swedish International Development Cooperation Agency, Mercedes-Benz South Africa, the South African Business Coalition on HIV/Aids (SABCOHA) and the National Bargaining Council for the Road Freight and Logistics Industry (NBCRFLI) – will provide screening for sexually transmitted diseases (STDs), HIV/Aids testing and counselling, and hand out antiretroviral drugs to long-distance truck drivers.

The Trucking Wellness initiative was started in 1999 by the NBCRFLI in partnership with other public and private organisations committed to fighting the spread of HIV/Aids in the trucking industry.

In view of these statistics and the danger of losing drivers to diseases such as malaria, tuberculosis and HIV/Aids-related illnesses, it was vital to establish an accessible healthcare scheme such as the industry’s Trucking Wellness programme.

Trevor Short, chairperson of NBCRFLI, which is part of the wellness programme, said the health of truck drivers in the country is crucial as 80% of goods in South Africa are transported by road.

“To lose key personnel here would present a threat to the industry and to the national economy.”

Kobus van Zyl, vice president of Mercedes Benz South Africa, another partner in the programme, agrees: “Imagine the impact on our economy if the spread of this disease was left unchecked in the trucking industry. Truck drivers in their thousands transport goods between suppliers and consumers or secondary manufacturers daily.”

Short said the programme tested 2 330 employees in the year 2000, using just two mobile clinics. He said they were hoping to test 20 000 people a year with the 10 new mobile centres.

“The Trucking Wellness programme is not glamorous, but it works,” he said.

The mobile clinics will be situated at truck depots where drivers stop to get their trucks serviced while they are on their journey. The programme also operates 21 wellness centres staffed by registered nurses and counsellors, situated along the country’s major transport routes.

Brad Mears, CEO of SABCOHA, said his coalition was also working on taking the Trucking Wellness programme across Southern Africa. “HIV/Aids is often viewed by the country’s neighbours as a huge snake with its head in South Africa.”

South Africa’s Health Minister Aaron Motsoaledi has commended the programme and said the services would also be extended to women who may be at risk of contracting sexually transmitted infections from truckers.

He added that the Department of Health was aware of the dangers that long-distance truck drivers were exposed to as a result of being away from their spouses for long periods. “It is important to provide our truck drivers with primary healthcare services, including counselling, to minimise the risks to themselves and their spouses,” he said.

“I commend the South African Business Coalition on HIV/Aids for working with us in this regard.”