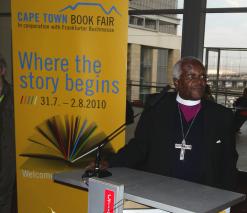 Archbishop Emeritus Desmond Tutu was
a guest speaker at the 2010 event. 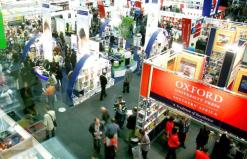 With books increasingly published in both paper and digital formats, the South African publishing industry will have to develop new business models in order to take advantage of the transition.

This is just one of the issues that leaders in the book publishing industry will be discussing at this year’s sixth Cape Town Book Fair, taking place for the first time in its new biennial format.

According to the executive director of the Publishing Association of South Africa, Brian Wafawarowa, the fair will give exhibitors the chance to network with one another and also with the public.

“It will allow traders to exchange knowledge and give the public an insight into the industry,” he said.

Some 200 publishers from countries in Africa and the Arab world, and developing nations such as India and China, will showcase their books to an expected 50 000 visitors.

Companies will be launching new titles, profiling their authors and selling books at discount prices.

As well as the transition to digital, industry leaders will also discuss new business models that have to be developed because of the advent of the ebook, as well as the issue of access to books.

The first morning is free to trade visitors who have preregistered before 1 June 2012. It is open to the public from 2pm and will run until 10pm.

The exhibition was a yearly affair but has since changed to a biennial event after the publishing industry asked organisers to remain in line with their production capacity.

“They wanted it to be every two years because by then they would have a substantial number of books to display,” said Wafawarowa.

He said this exhibition works well for small local publishers that do not have the exposure their larger counterparts receive at the London, Bologna or Frankfurt book fairs.

“Some are hardly known in this country and they get good exposure here.”

To add a snazzier feel to the event, organisers have unveiled an eye-catching new logo, which shows a stack of books arranged in the shape of Table Mountain.

They have also partnered with Thebe Special Projects, Conferences and Events which will help enhance the quality of the event and the experience of exhibitors.

The IPA Congress will be held in Africa for the first time in the organisation’s 116-year history.

Between 12 and 14 June, the congress will take place at the CTICC with the theme Publishing for a new era.

The event attracts between 600 and 1 000 professionals and policy makers from around the world, as well as representatives of Unesco, Microsoft and other leading publishers.

Delegates will discuss literature’s migration to the digital format, intellectual property laws, the threats of state publishing, and how the slow recovery from the current economic recession affects the publishing industry.

Wafawarowa said the decision to bring the congress to South Africa was based on the growing strength of the country’s publishing industry.

“Though South Africa is a small market our contribution to literature is significant.”

It had taken more than a century for the congress to come to Africa because the continent makes up less than 3% of the world’s book output.

However, Wafawarowa said that events such as the fifth IPA Copyright Symposium that took place in Accra, Ghana, in 2002 might have convinced the IPA to bring the congress to Cape Town.