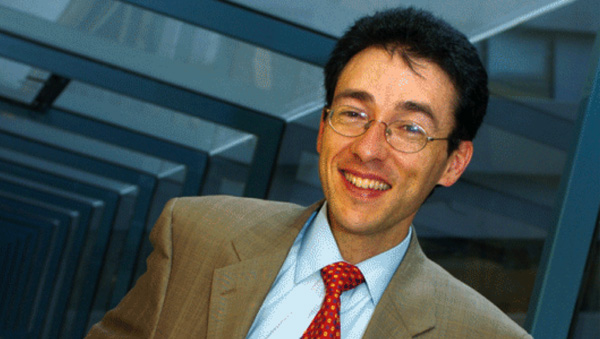 Dr Taddy Blecher is a pioneer of the free tertiary education movement in South Africa. A man with a great vision, he believes that with an inwards-out approach to life, everyone has the ability to be successful. (Image: Skoll Foundation)

Dr Taddy Blecher is a pioneer of the free tertiary education movement in South Africa. A man with a great vision, he believes that with an inwards-out approach to life, everyone has the ability to be successful.

A philanthropic social entrepreneur, also known as the transcendental crusader, who looks like Harry Potter, Blecher is a bubble of energy and abundance; and he is very, very smart. He has single-handedly transformed the face of development through education, by challenging conventional wisdom that only the elite are destined for power and wealth. He believes that it all comes down to the magic and genius within each of us.

Blecher is an actuary by profession, and has applied his insights to creating a radical educational model to fill the gap in business education between matric and MBA-level qualifications. His basic philosophy is simple: if everyone gave something to someone else, no-one would need anything.

“Old economic theory posits that resources and labour are scarce, and hence there is protectionism. In the new economy, the human mind is not limited. We live in an abundant universe.” Blecher believes everything we need is contained within the human mind and that education is there “to unlock peoples’ hearts and spirits – provide nourishment and remove obstacles”.

Blecher, wealthy, white and in his late twenties, was ready to emigrate from South Africa when he took stock and realised that his home was where he was needed to make a difference. “I saw aching poverty,” he said, and he made a life-changing decision to do something about it. In 1999, he and his colleagues opened the Community and Individual Development Association (Cida) City Campus to give disadvantaged youths a chance to overcome hopelessness and earn a four-year business administration degree.

Starting out from his office in Johannesburg, without any university buildings, courses or staff, he began by faxing a letter of invitation to 350 schools. The letter asked that the brightest and poorest students apply to a new higher education institution. This letter promised them the “best business education in Africa”. This was to be South Africa’s “first free university”, created to serve talented youngsters from poor black communities who could never afford to send their children to established universities.

“It went ballistic. We had 3 500 applications for an institution that did not exist,” said Blecher. They were able to borrow a building for the institution and without computers, the eager youth practised typing on photocopies of a keyboard.

Everyone studied the same course – a four-year accredited Bachelor of Business Administration – incorporating accounting, finance, entrepreneurship, leadership development and IT. But that was only one of seven components of this holistic model. The components were knowledge, skills development, practicum in administration, self-management, professionalism, community skills transfer, and recreation.

The Cida City Campus was an incredible success that had blue-chip sponsors, a campus and a reputation for innovation, and 1 600 students passed through its doors over a five-year period. Blecher and the other founders left CIDA City Campus in 2007. The city campus has ceased to exist in this form, although the model and its principles are still held by Blecher. It has been transformed into a new venture, the Maharishi Institute.

According to Blecher, the success of Cida’s educational model was due in no small measure to the discipline of Transcendental Meditation (TM). It was practised by students, teachers and management. TM founder Maharishi Mahesh Yogi explains the practice: “It is not a set of beliefs, a philosophy, a lifestyle, or a religion. It’s an experience, a mental technique one practices every day for 15 or 20 minutes.”

The Maharishi was the first guru to make the philosophies and spiritual practices of the East accessible to the West. “TM is one of the best techniques for human development and it has its effect by helping people be more focused and at peace, which means they will be more dynamic.”

Blecher is animated and passionate, committed and dedicated when discussing the Maharishi Institute. It followed on from the Cida model and is a unique set up that prides itself on a “no hand-outs” philosophy. When the students graduate, they have to pay for the university costs of another student who will follow in their footsteps.

“In one year, these students will be earning more than their families could earn in five years,” Blecher says, so it is only fair that they should pay something back for the next generation of students.

He realised the solution was not to open one’s wallet and hand out wads of cash; it was to focus on education and entrepreneurship. If South Africa was going to develop a long-term, sustainable future, it needed to provide a way into the professions for the poor black majority. It needed to give them a stake in society. From an economic perspective, he held that higher education was the driver of wealth – and decided that he would create a free business university that would provide the gateway for those who would otherwise be excluded.

Access to free university level education, launched with the help and content of Regenesys Business School, would provide a way out for them. Once it started, Blecher tapped into the business network to find people who could teach business skills – and he had an immediate response from companies wanting to attract talented black youngsters into the financial services sector. “Our students, from squatter camps and townships, were learning from people who had done R3-billion business deals,” he says.

“Education needs to be holistic,” he says with conviction. “The school system is not producing a happy society, and people are not awake in the way they should be.” Besides providing tertiary education to youngsters who could not afford to attend existing universities, he hopes to help people find direction in their lives and help to transform communities. “My deepest interest is to help people realise how great they are.”

The educational model is a holistic one, based on the knowledge that “businesses don’t hire people with facts, they hire people with qualities”. What Blecher means is that good businesses don’t go out to look for someone who can read a balance sheet; they look for someone with integrity, self-discipline, focus, passion, compassion, initiative and team spirit – who can read a balance sheet.

Furthermore, students maintain the institution: they clean, they do the repairs, they cook the food, and they are also required to volunteer for community work when they go back home during the holidays. Some teach; others mentor teenage orphans responsible for looking after younger siblings. The final aspect is that all students have to start a business, for which they are given start-up funding. This funding must be repaid. The model is to create entrepreneurs, a mind-set that needs to be learned. And all of them have to give something back to their communities, furthering Blecher’s dream of awakening South Africa.

Often the first members of their families to go to university, graduates then step into a life that was previously out of reach. The former actuary points out that graduates will collectively earn R150-million in salaries this year, which by his calculations amounts to a net present value of R5-billion over their 40-year careers.

The Maharishi business school makes available to students a general Bachelor of Business Administration (BBA) course, through its partner Maharishi University of Management in the United States, via distance education, as well as practical specialities such as information technology, construction and entrepreneurship for those who qualify. Blecher says that the Institute also offers young people from disadvantaged communities “access to free education and the opportunity to work four hours a day in a customised call centre built on campus. With space to train 1 000 to 1 500 students, this creates skilled call centre operators to supply the industry. Students continue their studies while working at the call centre. Last year, the Impact Sourcing Academy was launched with the help of the Rockefeller Foundation, and Aegis South Africa, and to date has trained 950 unemployed youth for jobs in the call-centre industry. The Impact Sourcing Academy is opening next month in Durban, again with the support of the Rockefeller Foundation, where the goal is to train 1,200 unemployed youth for jobs over the next 18-months.””

Blecher is the chairperson of the South African National Government task team on Entrepreneurship, Education and Job Creation, and chief executive of the Maharishi Institute and of the Community and Individual Development Association. He helped to create six free access institutions of higher learning and is the co-founder of the Branson Centre of Entrepreneurship with Sir Richard Branson. In 2009, he was named by author Tom Peters as one of the top five most influential entrepreneurs in the world over the last 30 years.

Blecher has been involved in the development and operation of many initiatives, including the Ezemvelo Eco-campus, 21st Century Learning Labs, the Africa College Fund and the creation of the Elders, with former US president Jimmy Carter, former Irish president Mary Robinson and Archbishop Emeritus Desmond Tutu. “What drives me is the absolute knowledge and certainty that every human being is made of genius, and we have the opportunity to end poverty in this generation.”

This individual who has reinvented education says: “I really believe this from the bottom of my heart – in our generation in South Africa, we can end poverty, we can end crime, we can end the tremendous problems we have with sickness, and we can end unemployment. But the only way we can really do this is through developing the most under-developed resource in this country – and that’s the human assets in this country.”

He concludes with the principle of the triple bottom line: people, planet and prosperity, and speaks of how a philanthropic culture can sustain people. “This is a place to turn broken people into empowered people, a place to achieve their life goals. I call it mass personalisation, fulfilling human potential using the inside-out mechanism. Education is dealing with fundamental attitudes of hearts and minds; we need to awaken what is inside us and unleash the passion. We need to focus on our greatness. Every student is a genius waiting to happen.”