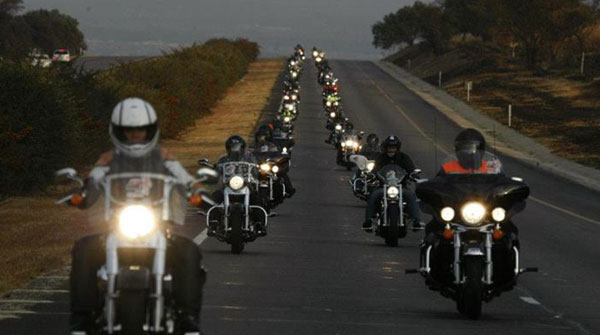 Bikers for Nelson Mandela is a group of bikers who work in community service to honour and continue the benevolence of Madiba, doing good in the smallest villages and the biggest cities, and bringing much-needed help to out-of-the-way rural places.

Each year, when they put on their helmets and set off with the team, local and international actors, adventurers, media people, sportsmen and women, singers and supporters give their time to promote Nelson Mandela International Day and get involved in community initiatives.

It is marked on 18 July, Madiba’s birthday, but the bikers spend days travelling around the country stopping off to help where they are needed. Nelson Mandela International Day was declared by the UN General Assembly in 2009 in recognition of Mandela’s birthday. It was inspired by a call he had made a year earlier for the next generation to take on the burden of leadership in addressing the world’s social injustices when he said: “It is in your hands now.”

Mandela Day is a global call to action for citizens of the world to take up the challenge and follow in his footsteps. Its objective is to inspire individuals to take action to help change the world for the better and in so doing, to build a global movement for good. Originally, it began with asking people to devote 67 minutes of their day doing something for the good of others – in recognition of the 67 years Mandela devoted to the world. But it has grown to be much more than that.

The bikers, for example, travel far and wide with their initiatives to help and empower others. And they are a typical charity group; they just love their hogs and love riding to help others.

“Take action; inspire change; make every day a Mandela Day,” is the motto of the day, which encourages people to extend their humanitarian actions throughout their lives. This way, individuals will help to change the world for the better and build a global movement for good. The message behind Mandela Day is simple – each individual has the ability and the responsibility to change the world for the better.

And this year is particularly symbolic: it is the first Mandela Day after his death, and it marks South Africa’s 20 years of freedom.

One of Mandela’s core values that he reinforced was standing together in unity; this is an idea the bikers perpetuate, with people from different walks of life riding in solidarity.

It was started by Zelda la Grange, Mandela’s personal assistant. La Grange is a formidable human – a woman, a biker chick, a philanthropist, a person on a mission. Her interests and career have merged into this initiative, which takes her across South Africa every July. Every year since 2010, La Grange and her group have ridden across the country to find a way to spend their 67 minutes – each day for a few days – to celebrate the Mandela legacy.

La Grange has said that after working with him for almost two decades, there is nothing she takes more seriously than the day named after him. Even after four years of the Bikers, she is not losing any energy as she gathers celebrities and major corporations to join. “But I want people to do their own things for Mandela Day, not be dependent on celebs to push for change.”

Joining the biking community five years ago, La Grange says the moment she puts on her helmet the world disappears and only the road exists. It becomes a sort of meditation for a woman whose phone rarely stops ringing. When she’s on her motorbike, it’s the only time she cannot answer. “There’s nowhere else in the world where you can be by yourself,” she says. And following her example, she adds that anyone can use their own lifestyles to help others – you just need a little inspiration.

Each year, the bikers focus on different social issues. Among many actions, collectively these bikers have travelled to crisis centres to help stop rape and gender-based violence, helped victims of abuse, educated communities about animal care, painted houses, set up jungle gyms for children, planted vegetable gardens for communities, and donated generous amounts of money.

At times, they find it difficult to hold back the tears when they see the difficult circumstances in which so many South Africans live.

The Nelson Mandela Foundation appeals to the biking community to support the Mandela Day tour by performing a good service of some kind in their own home town and local communities, to work for 67 minutes on various community projects in each region.

On Friday, 11 July, La Grange, DJ Fresh, Saint Seseli, Angie Khumalo, Anele Mdoda, Alex Caige, Clint Cunningham and Johrne van Huyssteen will put on their helmets and set off on another Bikers for Mandela Day tour. First for Women Insurance, via its charitable trust the First for Women Foundation, will again be supporting the bikers on their journey.

They will leave from the First for Women head office in Fourways, in Joburg, and head for Diepsloot. There, they will partner with the founder of 67 Blankets for Nelson Mandela Day, Carolyn Steyn, and Afrika Tikkun, an organisation that is dedicated to investing in education, health and social services for children, youth and their families through its community centres of excellence and strategic partnerships.

At Afrika Tikkun, the team will distribute handmade blankets to 67 beneficiaries. From Diepsloot, the bikers will head to the Caritas Gemeenskap Focus organisation in Vryburg, the Grace Divine Outreach Centre in Kimberley, and the Bloem Shelter in Bloemfontein where they will, for 67 minutes, spend time doing various outreach activities.

For the foundation, Mandela Day actions, no matter how big or small, should consistently focus on the realisation or restoration of dignity and empowerment through contributions. Several focus areas have particular significance:

• Education and literacy: literacy and learning give people the chance to fulfil their dreams; let’s lead through education.

• Shelter and infrastructure: this action brings people together to build homes, communities, cities, continents and a future.

• Service and volunteerism: people everywhere are encouraged to contribute their actions to making the world a better place by each becoming a public servant in the service to humanity.