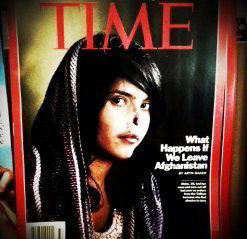 “I don’t think it was a predictable way of
photographing, because I think she
comes across quite powerfully in the
image,” said Jodi Bieber after winning the
2010 World Press Photo of the Year.
(Image: Jason Littrell, FLickr)

Aisha is undergoing facial reconstructive
surgery in the US. She currently has a
prosthetic nose, which reveals how she
would look after surgery.
(Image: thehealthculture.com)

South African photographer Jodi Bieber has won the 2010 World Press Photo of the Year award for a haunting portrait of an Afghan woman maimed by her husband.

The award came as a huge surprise to Bieber. “Are you serious? I cannot believe it … wow I’m very happy … I’m thrilled,” the photographer said when managing director of World Press Michiel Munneke phoned her to tell her that she’d won.

Bieber’s subject matter was 18-year-old Bibi Aisha whose nose and ears were cut off by her husband after she left him.

“I photographed her in a shelter for women in Afghanistan. She’s a very beautiful women and I really wanted to capture the inner beauty,” Bieber said in a statement to World Press after the award was announced.

The startling image of Aisha’s disfigured face, framed by her long black hair and purple headscarf, was first published on the cover of last year’s 9 August edition of Time magazine.

“I don’t think it was a predictable way of photographing, because I think she comes across quiet powerfully in the image,” said Bieber, adding that this was what made the shot stand out from other photos of women in similar situations who are often portrayed as vulnerable.

Bieber believes the cover image intrigued many people. “I think people were first taken in by her beauty, her external beauty, and wondered what the photograph was doing on the cover. Then they were taken in by her nose being cut off. By not exaggerating her disability … I think that’s what drew people to the photograph.”

Bieber, 43, comes from Johannesburg and has lived in the city for the last 35 years. She studied at the Market Theatre photographic workshop, a non-profit organisation also based in Johannesburg. World-famous photographer David Goldblatt, who shot many iconic images of South Africa during the apartheid years, founded the organisation.

She began her career in 1993 under the guidance of another highly esteemed South African photojournalist, the late Ken Oosterbroek.

Oosterbroek was part of the Bang-Bang club – a famous group of four photographers best known for their coverage of township violence between 1990 and 1994.

Bieber worked with Oosterbroek as a darkroom assistant at The Star newspaper – South Africa’s biggest daily paper at the time – and then freelanced for that publication until 1996.

Bieber also covered the crucial period leading up to and during the first democratic elections in South Africa and won a number of awards for her efforts.

She then attended the World Press Masterclass in Amsterdam and later went on to freelance for foreign magazines and newspapers.

Back to her roots

Although she has worked for a variety of foreign publications, Bieber’s personal projects have mainly focused on capturing the essence of Africa. She was one of 100 photographers across the world chosen for A Day in the Life of Africa book project in 2002.

She also produced the book Between Dogs and Wolves – Growing up with South Africa, which looked at the different environments in which young South Africans live. The book was published in five countries.

Her most recent book, Soweto, celebrates South Africa’s biggest and most famous township and its people. “Soweto came about when a French-Swedish friend, Axel Gylden, made me aware that there were very few contemporary photographic books covering it. Soweto is on our doorstep and sometimes we take significant things for granted,” she said of her book, published in February 2010.

Bieber already has seven World Press photographic awards to her name, four of which were first prizes. She has also worked as an advanced photographic facilitator at the Market Theatre photographic workshop, where she continues to teach.

She has guest-lectured at the London College of Communication and Westminster University in the UK, the ICP school of Photojournalism in New York and at Photo Españe, the International Festival of Photography and Visual Arts in Madrid.

She was also part of the panel of judges for the World Press awards in 2008.