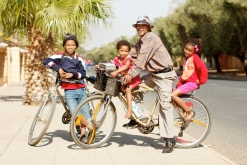 Johannes van Wyk and his children Chris,
Danisha and Sarie not only cycle, but are
also capable bicycle mechanics. 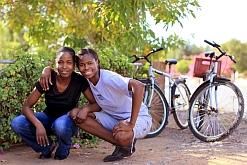 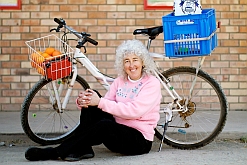 Marina le Grange prefers to cycle short
distances, rather than getting into a car.
(Images: Day One Publications)

Two South African friends who share an enthusiasm for bicycles and cycling have started a project that explores South African bicycle culture and commuting on the saddle.

The project, called Bicycle Portraits, is the idea of Stan Engelbrecht, a photographer and publisher, and Nic Grobler, a motion graphics designer.

The focus of the project is to provide insight into the lives of people who use bicycles for daily commuting, instead of just leisure or exercise. With global warming a concern across the planet, the efforts of these energetic people have the potential to make a big difference.

Since early 2010, Engelbrecht and Grobler have travelled across the country, on their own bicycles, to take photographs of saddle commuters and their bikes.

“It has been an incredible journey to meet South Africans who rely on two wheels for transport, and also to meet their bicycles,” Grobler says.

They have been everywhere, from South Africa’s major cities to the West Coast, from country towns in the Free State to Orania in the Northern Cape.

“So many times, when we look at the bicycle and the owner, they just fit together. I don’t know how it works, it is just a weird connection,” Grobler says.

Engelbrecht and Grobler have photographed South Africans of all ages, and from all walks of life. Some of the cyclists they meet along the way use bicycles because they cannot afford cars or public transport. Others just love cycling.

Marinda le Grange, from Orania in the Northern Cape, had this to say about her bicycle: “The most enjoyable thing for me on the bicycle is when I become daring enough to ride with no hands, just to pedal and not hold on – then I feel young.”

David Mamabolo, from Muckleneuk in Pretoria, said many people want him to sell his bicycle to them. “But I always say no because I really like it. You see, it’s an old one like me.”

Chrystl Küstner, from Pretoria in Gauteng, works as a physiotherapist and uses her bicycle to visit patients. “I like cycling with a purpose, not just for the sake of it. I go to the shops and I do my shopping, carrying a backpack and using my carrier. I do all my shopping with the bicycle, or with my feet – I don’t like driving with a car,” she says.

Awie Harmse bought a bicycle because he can’t afford a car. Salmon Mojaki says that his bicycle may have an old frame, but it is one of the strongest frames you can get, and his bicycle has been the best transport he’s ever had.

Engelbrecht and Grobler are raising funds to publish a full-colour hardcover photographic book early next year of their travels, the people they have met and their stories.

The co-founders hope the project and the book will encourage more South Africans to get on to their bicycles and start peddling.

Strangely, besides all the benefits one could enjoy from owning a bicycle, commuter cyclists still seem to be a rare breed,” Engelbrecht says. As they spent more time on the road, they realised just how few South Africans use bicycles to commute.

They also want to change perceptions about cycling. Given all the benefits, such as independence, health, fitness, cost-effectiveness, and kindness to the environment, more South Africans from all social classes should be encouraged to use bicycles.

Many of the cyclists they interviewed told them that cycling was easier on the pocket. Cycling helps them to save money every month by avoiding public transport. However, Engelbrecht says that he’s not exactly sure why so few people don’t own bicycles or cycle.

Some of the reasons they have identified include cultural intolerance, stigma of poverty, physical danger and lack of infrastructure. “We’ve noticed that as our major centres develop there still seems to be a trend to make cities more friendly for cars, not people,” he says.

If roads were more cycle-friendly and the correct infrastructure was established, owning a bicycle could change the lives of many people. South Africa’s socio-economic climate makes it the ideal location for cycle commuting, Grobler says.

For more people to take up cycling, there is a great need for good quality, yet affordable and comfortable bicycles in South Africa.

Cheap imported bicycles are another challenge, he says. They have too many gears, smart paint jobs and are poorly made. “Second-hand bicycles can be cheap but simple, robust and easy to maintain. That is what we need,” he says.

Through the project, Engelbrecht and Grobler also want to empower underprivileged South Africans. Some of their ideas include teaching bicycle maintenance skills and providing cyclists with important cycling gear such as helmets, tyres, tubes and locks.

One of their long-term goals is to create a support structure such as a trust funded through a percentage of book sales, or a charity, for people who appear in the book.

Grobler says that they have relied on social networking sites such as blogs, Facebook and Twitter to raise awareness of the Bicycle Portraits project.

This has been very successful and has created an entire community of local and international followers who are interested in the project. Some fans are cycling fanatics, but others are not familiar with bicycles at all.

Anyone with a creative idea can pitch it on the Kickstarter website. The way it works is simple: every project must have a funding goal (an amount in dollars) and a time limit between one and 90 days, determined by the creator of the project.

Once the deadline is reached, funding will either be successful if it reached the goal, or terminated. If it meets the goal, all pledge amounts are collected at once and the money is handed over to the project creator. In return, the project must be completed as promised.

If the project does not meet the funding goal all pledges are cancelled. To encourage people to pledge, each project has to offer a reward as part of the pledge deal. Engelbrecht and Grobler have undertaken that each person who donates US$50 (about R348) or more will receive a copy of the book.

Their goal is to raise $35,000 (R243 862) to complete the production of the book. Fundraising has been divided into three pledge drives. The third and final fundraising leg will start in December.

In the first phase, they raised more than $15,000 (R104 512) to cover travelling, shooting, writing and preparation of the content for the second phase of the project.

Revealing the spirit of South Africans

In comparison with the rest of Africa, and a country like the Netherlands, South Africa has quite a bit of catching up to do when it comes to cycle commuting. But besides motivating more South Africans to cycle, Engelbrecht says the project has also revealed the character and friendliness of South Africa’s people. Wherever they went, people were big-hearted, eager to share their stories, and truly inspirational, he says.