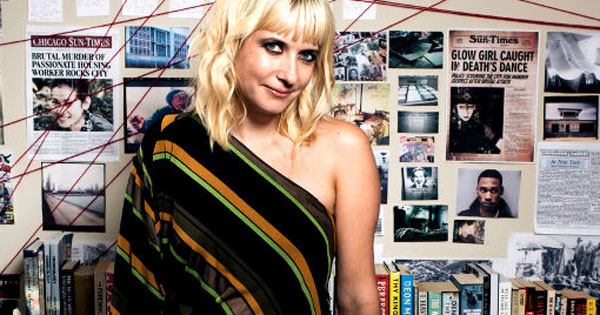 Beukes says that when she writes, it’s “like taking a road trip at night. You know where you’re leaving from and where you’re going to, and some of the major landmarks along the way. The rest of the time, it’s pitch black. You can see 20 feet ahead of you in the headlights and you just have to figure it out. And sometimes getting lost or taking a detour from your intended route turns out more interesting.” (Image: Lauren Beukes)

A woman of many talents, Lauren Beukes is an award-winning, bestselling novelist who also writes comics, screenplays, TV shows and, occasionally, journalism.

Playing her part for South Africa, she is raising the profile of the nation internationally through her novels. Beukes has been described as South Africa’s most inspired new literary voice, writing imaginative fiction with a crazy twist. But her fantastical stories also shine a light on real issues with which people grapple. Beukes’ work is wildly entertaining, and richly nuanced. She says: “I like cute. I like dark. I like rugby-tackling social issues through fiction.”

Her ideas develop like Polaroids in her head, she explains. “I always know my beginnings and my endings.”

Beukes was born in Johannesburg on 5 June 1976 and lives in Cape Town with her husband and daughter. She graduated with a Master’s degree in creative writing in 2006 from the University of Cape Town, spending the first decade of her writing career as a freelance journalist, including two years in New York and Chicago. It was during these years that she got her real education, meeting interesting people and having out-of-the-ordinary experiences, from diving with sharks to hanging out with wannabe teen vampires and township vigilantes.

It was a time that set her on a path to award-winning fiction. She gets her ideas for her work “from stuff I’ve read or seen or overheard, or a news story or an advertising billboard or something half-glanced from the car windows – and I use that as a jumping-off point. The inside of my head looks like a crazy person hoarder house. Full of useless things that sometimes, if I’m lucky, come together in interesting and surprising ways.”

Beukes says that when she writes, it’s “like taking a road trip at night. You know where you’re leaving from and where you’re going to, and some of the major landmarks along the way. The rest of the time, it’s pitch black. You can see 20 feet ahead of you in the headlights and you just have to figure it out. And sometimes getting lost or taking a detour from your intended route turns out more interesting.”

In 2010, Beukes won the Kitschies Red Tentacle Award, followed by the prestigious Arthur C Clarke Award the following year for her energetic, phantasmagorical Zoo City, a hardboiled thriller about crime, magic, the music industry, refugees and redemption, set in a re-imagined Johannesburg. The latter award is for the best science fiction novel and is bestowed annually on a book that has been published in the United Kingdom. The award is presented at a ceremony at the Royal Society in London, in front of an audience of science fiction writers, publishers, academics and fans.

The Red Tentacle is awarded annually to the novel containing speculative or fantastic elements that best fulfils the criteria of intelligent, progressive and entertaining. The winner receives a £1 000 (R17 982) prize, a hand-crafted tentacular trophy and a bottle of the Kraken’s finest black rum.

Zoo City was also long-listed for the Impac Award. The International Impac Dublin Literary Award is an international literary award for a work of fiction, jointly sponsored by the city of Dublin, Ireland and the company Impac. In South Africa, the novel was short-listed for several prizes, including the 2010-2011 University of Johannesburg Creative Writing Prize, the 2011 M-Net Literary Awards and the Nielsen’s Booksellers’ Choice Award 2011. It was also long-listed for the 2011 Sunday Times Fiction Prize and nominated for the 2011 World Fantasy Award for best novel.

The novel was also been short-listed for the Grand Prix de l’Imaginaire in France for best foreign novel, best translation by Laurent Philibert-Caillat and best cover by Joey Hi-Fi. The cover artwork received the 2010 British Science Fiction Association Award for best art. The film rights have been optioned by the South African producer, Helena Spring.

The Shining Girls by Lauren Beukes

Among Beukes’s works are Moxyland, Maverick: Extraordinary Women from South Africa’s Past, the graphic novel, Fairest: The Hidden Kingdom, with Inaki Miranda and most recently, The Shining Girls, which was short-listed for the Sunday Times Fiction Prize in May. The winner will be announced on 28 June.

The Shining Girls is about a time-travelling serial killer and the survivor who turns the hunt around. The novel is set to become a TV series, thanks to Leonardo DiCaprio. The Hollywood star bought the rights to Beukes’ novel through his Appian Way Production company with MCR. The group is looking to adapt the novel for television.

Harper, a serial killer in 1932 Chicago, finds a house that lets him travel to various points in history, where he kills women of talent and potential. Kirby, the one girl who got away, is an intern at a Chicago newspaper in 1992, attempting to find the man who nearly killed her. As Harper jumps in and out of history, Kirby starts to realise that she’s not dealing with an ordinary monster.

Moxyland is a cyberpunk novel set in a future Cape Town. It is a dystopian, corporate-apartheid political thriller in which cellphones are used for social control. Her first book, published in 2005, Maverick: Extraordinary Women From South Africa’s Past, is a non-fiction work of short biographies of remarkable raconteurs, renegades and rebels. It was long-listed for the 2006 Sunday Times Alan Paton Award.

As a TV writer, Beukes has written for various children’s shows, including Florrie’s Dragons (Disney UK) and Mouk (Millimages); and as head-writer, she co-created South Africa’s first half-hour animated show, The Adventures of Pax Afrika, which ran for three years on SABC3; she wrote the pilot episode for the political satire puppet show, Z News, and episodes of the Desmond Tutu travel show, The South African Story.

She has directed episodes of Pax Afrika and her debut documentary, Glitterboys & Ganglands, about South Africa’s biggest female impersonation beauty pageant, has shown at festivals internationally. It won Best LGBT Film at the San Diego Black Film Festival in 2012. It is irreverent, fun, glamorous, hard-hitting and ultimately a feel-good film about acceptance and tolerance.

Comic shorts under her belt are All the Pretty Ponies, with Inaki Miranda in Vertigo’s Strange Adventures, and Birdie with Gerhard Human in The Witching Hour. She has also published short stories in several anthologies and as a journalist, her articles have been published in a wide range of local and international magazines, including The Hollywood Reporter, Nature Medicine and Colors as well as The Sunday Times Lifestyle, Marie Claire, Elle, Cosmopolitan and SL Magazine. She won Best Columnist Western Cape in the Vodacom Journalist of the Year Awards in 2007 and 2008.