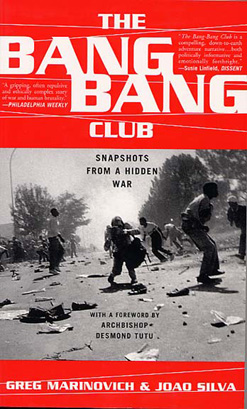 The cover of the book written by Greg
Marinovich And Joao Silva on which the
film is based.
(Image: Axis gallery) 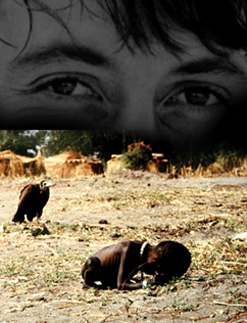 The haunting eyes of Kevin Carter above
the Pulitzer Prize winning picture that
ultimately cost Carter his life.
(Image: HBO)

Filming of The Bang Bang Club, a movie which reveals the lives and times of four photojournalists who captured the harrowing violence of the apartheid South Africa, is underway in Johannesburg.

Based on the lives of photographers Ken Oosterbroek, Joao Silva, Kevin Carter and Greg Marinovich, the movie tells the true story of the four men, recounting their relationships with each other and the stresses, tensions and moral dilemmas of working in situations of extreme violence, pain and suffering.

The film follows the journey of the four photographers as they venture into dangerous territory to capture the images that shocked the world about the brutal violence during the apartheid era.

Silver, who began his career in the South African film industry, before writing and co-producing Gerrie & Louise, an international Emmy award-winning, feature-length documentary for the US TV channel CBC in 1997.

He has directed several documentaries for the History Channel and Discovery Channel.

Silver is also respected for the critically acclaimed The Last Just Man, which won over 14 international awards.

He has a law degree from the University of Witwatersrand, Johannesburg.

The film has been adapted from Greg Marinovich and Joao Silva’s book, The Bang Bang Club, and it recounts true stories of the four men.

The plot tracks the relationships with each other, the stresses that came with the job and surviving both as humans and journalists.

Between the four journalists, they have captured images of iconic moments in South Africa’s history like the Boipatong massacres, as well as the Shell House massacres, which made front-page news across the world.

The photos illustrate the brutality inflicted on black South Africans by the police and armed forces, as well as the clashes between African National Congress and Inkatha Freedom Party supporters.

In 1994, during the famous Thokoza township hostel violence outbreak, Ken Oosterbroek, who was on site to photograph the incident, was shot dead in the cross-fire. Marinovich was injured in the same riots.

Kevin Carter committed suicide in the same year that he won the prestigious Pulitzer Prize for his famous photograph of a Sudanese child and a vulture ominously standing behind the bone-thin child.

In as much as he celebrated his win of the Pulitzer, Carter was also devastated by the amount of criticism about his picture.

According to a Time magazine feature entitled, The life and death of Kevin Carter, some journalists in South Africa called his prize a “fluke,” alleging that he had somehow set up the picture.

Others questioned his ethics. “The man adjusting his lens to take just the right frame of her suffering,” read the St. Petersburg Times, “might just as well be a predator, another vulture on the scene.”

Even some of Carter’s friends questioned why he didn’t help the starving, barely alive child.

Two months after receiving the award, Carter was found dead inside his truck, where he had gassed himself.

Greg Marinovich also won a Pulitzer for his image of an ANC member hacking to death Lindsay Tshabalala after he had been set alight.

Speaking to The Times newspaper, Marinovich expressed his excitement about the Hollywood production.

“I have some mixed feelings because you never know how the movie will turn out. But it is exciting to know our story will be told,” he said.

Silva, who now works for The New York Times, said the movie would contribute in “keeping the memory of Ken Oosterbroek and Kevin Carter alive.”

He said it was important to him that the movie kept the truth about their experiences,

“The plan is to guide the producers into bringing a real portrayal of what it was like in those days to the screen. The book was in many ways a token of love for what we went through.”

In preparation for their roles, Marinovich and Silva are working closely with the directors, “We are being consulted on the final script because the producers want it to be authentic,” he said.

The two photographers will also meet the actors before shooting starts to familiarise them with the story’s historical context.

They will also show the actors what went into a typical day in the life of four almost recklessly brave photojournalists, to assist them in understanding the true nature of being journalism in tumultuous conditions.