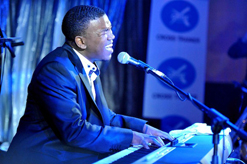 Loyiso Bala may be known as South Africa’s king of R&B, but now the much-loved entertainer has an official title to his name: South African UNAids Goodwill Ambassador.

The Joint United Nations Programme on HIV/Aids (UNAids) announced his appointment on 21 October. As a goodwill ambassador, 34-year-old Bala will use his public platform to reduce the stigma of HIV infection and fight discrimination against people with HIV. He will also speak out against gender inequality and gender violence.

“We are delighted to welcome Mr Bala to the UNAids family here in South Africa,” said Dr Catherine Sozi, the UNAids country co-ordinator in South Africa. “He has a powerful role to play in helping us highlight critical issues in the HIV response.”

Bala was quick to tweet his new job: “I’m honoured to announce my appointment as the UNAids Goodwill Ambassador. UNAids is the Join United Nations Programme on HIV/Aids.” The UN-funded organisation works with prominent individuals in the arts, entertainment, sport and other fields of public life, to build awareness of HIV and Aids.

Speaking to MediaClubSouthAfrica.com, he said: “The UN is known for its extraordinary good work in South Africa, Africa and the world. To be given the opportunity to be a part of this team is for me a great honour. After all, I don’t sing to only entertain but to also make a difference. Being a UNAids Goodwill Ambassador provides me with the best platform to carry this forward.

“I get many opportunities to address young people either through music or through speaking engagements. I will take the opportunity to raise some of the issues surrounding HIV/Aids in our country within my UNAids targets. This will hopefully open a dialogue about this issue in our nation.
I believe that the more we can talk about it, the better we can understand it and the closer we will be to defeating it.”

According to the Statistics South Africa May 2013 mid-year population estimate, the number of HIV-positive people in South Africa increased from an estimated four million in 2002 to 5.26 million in 2013. The South Africa 2013 Global Aids Response Progress Report states that while progress has been made in reducing HIV-related stigma and discrimination, much needs to be achieved by the 2015 Millennium Development Goal (MDG) deadline.

The sixth MDG relates to HIV and Aids, with Target 6.A to have halted and begun to reverse, by 2015, the spread of HIV/Aids. The UN reports that new HIV infections continue to decline in most regions. More people than ever are living with HIV as a result of fewer Aids-related deaths and the continued large number of new infections, with 2.5 million people newly infected each year. Comprehensive knowledge of HIV transmission remains low among young people, along with condom use. More orphaned children are now in school because of expanded efforts to mitigate the impact of Aids, it says.

Target 6.B of the MDGs is to achieve, by 2010, universal access to treatment for HIV/Aids for all those who need it. The UN reports that while the target was missed by 2011, access to treatment for people with HIV increased in all regions. At the end of 2011, 8 million people were receiving antiretroviral therapy for HIV. It says this total constitutes an increase of over 1.4 million people from December 2010. By the end of 2011, 11 countries had achieved universal access to antiretroviral therapy.

According to the Henry J Kaiser Family Foundation, in 2012, the reported number of adults – people aged 15 and over – in South Africa receiving antiretroviral therapy was 2 010 340.

Gender inequality is also a major challenge in South Africa, reflected in the preliminary findings of the Human Sciences Research Council National Household Survey recently. Results show that young women and girls between 15 and 24 years old are three times (17.9%) more likely to be HIV-positive than young men and boys in the same age group (5.6%).

In light of this, Bala will play a key role in inspiring people – young people in particular – to get tested for HIV. If they know their status they will be more able to make informed decisions about leading healthy and productive lives. HIV testing encourages disclosure and openness about the disease.

“I believe passionately in young people and in making a difference in their lives. This new partnership with UNAids provides me with a way to speak to them about issues which affect them. I am where I am today because of the guidance I received from people who loved me and guided me as a young person. I hope I can provide the same inspiration to my audience,” said Bala.

Born in Uitenhage, in Eastern Cape, Bala began his career singing in church at just three years old. He trained classically as a schoolboy at the world renowned Drakensberg Boys’ Choir. After completing school, his career rocketed with his family group, TKZee, the famed kwaito outfit. As a solo artist, he is now a multiple award-winning R&B and gospel musician and a triple platinum selling artist.

He has performed alongside international artists Elton John, Will Smith, Corinne Bailey Rae, John Legend, Brian McKnight and Jamelia, and for dignitaries and celebrities such as Nelson Mandela, Bill Clinton, Gordon Brown, Oprah Winfrey and Richard Branson. He has been nominated for MTV Awards and has been named You and GQ magazines’ most stylish male in the country.

Bala is also an ambassador for the social justice organisation, 46664; the child-focused charity, Smile Foundation; and the charity, MaAfrika Tikkun. He also uses his celebrity status to talk about HIV education in South African schools. He is married to publicist Jennifer Odjidja; the couple had their first child this year.