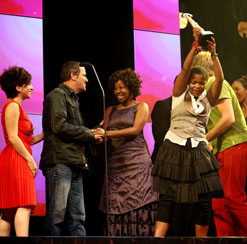 Freshlyground celebrating their victory
At the Sama awards. 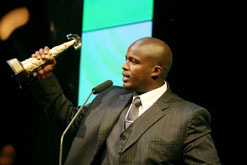 HHP with his Sama award

The crème de la crème of the South African music industry and die-hard music fans alike braved the cold, rainy weather to attend the 14th MTN South African Music Awards (Sama) on 3 May 2008. Held at the Sun City entertainment and casino resort in the North West province, the Grammy’s of South Africa attracted much attention as top musicians battled for various awards.

The show’s producer and Sama CEO, Sean Watson, says the event has grown from strength to strength, from just 25 awards to artists at the first ceremony in 1994, to over 50 awarded at this year’s ceremony, “We count the live TV broadcast of the awards as a milestone in the history of the awards,” says Watson. “Audience expectations have grown over the years and we needed to adapt accordingly, without compromising the live audience.”

The glittering Sama awards, afforded musicians the opportunity to showcase their talents to their peers and the millions of viewers who tuned in to watch the event live on television.

A highlight at the show was the lifetime award tribute to slain international reggae star Lucky Dube. He was shot and killed in a botched highjacking earlier this year. The muso was honoured with a highly spirited and touching performance by his band, the Lucky Dube Band, who were joined by award-winning Afro-pop group Freshlyground and the penny whistle trio of brothers Kwela Tebza.

The event was also a big night for South Africa’s top Hip Hop artist, Hip Hop Pantsula, popularly known as “HHP”. He walked away with best male artist of the year and best rap album.

The other lifetime achievement award went to Gérard Korsten (popularly known as Gé), the Afrikaans opera singer who died in 1999. His extensive career began in 1965 and he was a popular figure in Afrikaans culture.

South Africa has a thriving music industry working in a richly diverse musical landscape. Besides enjoying universal genres like jazz, R and B and pop, there are also unique traditional styles like maskandi and mbaqanga. Then there is the more modern kwaito, a type of contemporary township pop music. Gospel music is one of the top selling genres in South Africa and currently enjoys the most categories at the Samas.

The South African Music Awards were inaugurated in 1995, and they recognise high quality work produced in the areas of musical production, engineering and video production. The awards are run by the Recording Industry of South Africa, an organisation committed to “improving the state of the South African recording industry and promoting and safeguarding the interests of all member record companies, no matter what size”.

Each year, record companies enter their artists into the various categories and judging panels, made up of industry experts, judge the entries and decide on a number of nominees. After the judges have selected entries, the nominees are announced about three months ahead of the awards. The judges are also responsible for choosing winners, who are then announced on the night.

All material entered for this year’s awards must have been released between 1 December 2006 and 30 November 2007. The Best Selling Album, Best Music Video and Record of the Year are excluded from this rule.