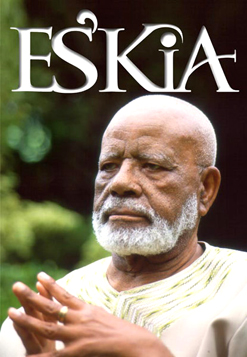 Published in 2002, “Es’kia” is a collection
of essays and public speeches spanning
30 years. 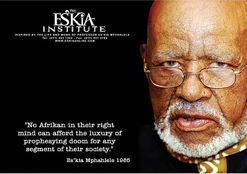 The author’s memorabilia such as this
poster, are available for sale at the Es’kia
Institute, which is inspired by Es’kia
Mphahlele’s work.
(Images:Es’kia Institute)

The South African literary fraternity is in mourning following the death of world-renowned writer Professor Es’kia Mphahlele at his hometown in the Limpopo province on 27 October 2008.

The celebrated writer, academic cultural and social activist, died at a hospital near his house in Lebowakgomo, where he had since retired, north of South Africa at the age of 88.

His family confirmed that he died of natural causes at the hospital.

In paying tribute to the late writer, minister of arts and culture Dr Pallo Jordaan said of Mphahlele, “Soft-spoken, humble, urbane, cosmopolitan, erudite and exuding ubuntu, Es’kia Mphahlele embodied in his person and in his work what he described as “the personification of the African paradox – detribalised, westernised but still African.”

The legendary wordsmith has contributed greatly to the literary community, both in South Africa and internationally.

Mphahlele was the author of two autobiographies, novels, more than thirty books of short stories; two verse plays and a number of poetry anthologies.

Fondly referred to as “the man of African Letters” he’s best known for his first book Man must live published in 1947. He is also revered for his book Down second Avenue, a vivid autobiography published in 1959 in which he describes his early years growing up in rural northern South Africa.

Published in 1959, Down second Avenue, is an autobiography by Mphahlele, which has been translated into 10 European languages as well Japanese and Hebrew. The book was banned in South Africa in 1966 under the Publications and Controls Board Act. It was later unbanned in 1978.

His book The African Image, which includes essays, literary and cultural as well as political commentary was published in London in 1962.

In 1957, Mphahlele was offered a job teaching in a Church Mission Society school in Lagos. He spent the next 20 years in Nigeria and Kenya, where he was the director of the Chemchemi Cultural Centre.

He returned to South Africa in 1977, where he joined the University of the Witwatersrand, becoming the first professor of the institution and founded the African literature department.

Born to be a writer

“It has been my fate to be a teacher and writer. The imagination is my regular beat as it is also the workshop of my mind; the territory of ideas, knowledge, thought and emotion is my hunting ground,” wrote Mphahlele in 1993.

Born on December 17 1919, he was a herd boy in the then Northern Transvaal.

Although he was born in Marabastad in Pretoria, while he was still a young boy, his parents sent him to live with his paternal grandmother. He returned to Pretoria to start his formal education. After high school, where he obtained a school-leaving certificate (an equivalent of grade 10), Mphahlele went on to study at Adams College, where he qualified as a teacher in 1940.

He completed his grade 12 while working two jobs as a teacher and a shorthand typist.

After a short stint in politics – he was part of a group of young members of the ANC who formed the ANC youth league – Mphahlele returned to his passion; education.

He took up a post, teaching English and Afrikaans at the Orlando High School, in Soweto in the early 1940s.

His teaching career was however short-lived. During his tenure at Orlando High, he encountered graduates from the legendary Fort Hare University, which has produced some of South Africa’s greatest thinkers, and Mphahlele was inspired to get involved in a number of advocacy activities.

The 1949 Eislen Commission on Native Education, inspired by the-then recently elected minister of Native Affairs Dr. H.F. Verwoerd, recommended a radically new system of education for black South African students, which TATA, along with other teacher organisations in other parts of the country opposed.

For his participation in move against oppressive act, Mphahlele was one of a number of teachers who were permanently banned from teaching in South Africa.

With his teaching career over, Mphahlele starting a long writing career, with his first book Man Must live, gaining him much recognition.

In the next era of his life as a writer, Mphahlele pursued a career in journalism in the 1950s.

Mphahlele wrote a series of short stories published in Drum magazine. His work helped to consolidate the short story tradition in South African literature, which is recognised among the best in the world.

When Mphahlele left South Africa to live in exile, his literary and academic career developed significantly.

During his 20 years abroad, he published two collections of short stories, which followed shortly after his first book. While in West Africa, he published The Living and the Dead in 1961.

Six years later, in East Africa, he published In Corner B.

The contents of both collections of short stories are included in The Unbroken Song (1986), which also contains some of Mphahlele’s poems.

As part of his Master’s thesis, in 1962 he published The African Image, which provides a historical perspective of South African literature. This, he juxtaposed with the way European writers often dealt with African subjects in their texts. He later revised the book and a second edition appeared in 1974.

For his PhD, he produced The Wanderers, a novel of exile originally submitted as a dissertation for his PhD in creative writing.

A writer of excellence

Professor Es’kia Mphahlele has received many awards for his work in his lifetime. Some of his achievements include being nominated for the Nobel Prize for Literature in 1969.

In 1984 he was awarded the prestigious Les Palmes Academiques by the French Government for his contribution to French Language and Culture.

In 1998 former President Nelson Mandela awarded him the Order of the Southern Cross, the highest recognition granted by the South African Government.

In 2000, he was acknowledged as, Writer Of The Century by Tribute Magazine.

In 2001, the University Of Venda for Science and Technology opened the Es’kia Mphahlele Centre for African Studies.

He has over 10 honorary doctorates from Universities across the world.

Over the years, many prominent South African politicians, writers and social commentators have paid tribute to Mphahlele.

“ … From exile, on his return to us, Mphahlele brought back experience, hard-won against homesickness, of cultural administration, educational methods and scholarly advances.

“We need his experience, his wisdom, and above all his keenly critical mind among us to achieve a South Africa and an African Renaissance to fulfil an Africa, in the words of Steve Biko, ‘self-defined, not defined by others’ politically, economically, socially, culturally or, philosophically.”

Professor Kader Asmal, former South African cabinet minister and member of parliament said of Mphahlele, “Es’kia Mphahlele’s life’s work is an inspiration to all of us. He remains the quintessential teacher who is at the same time the perpetual student. His commitment to education is unequivocal.”

From Rhodes University, Prof Guy Butler described Mphahlele as a writer who was a leader amongst his peers in many ways, “Es’kia Mphahlele’s position as a pioneer among the writers of Southern Africa is secure. He is more than a major figure in the intellectual resistance to apartheid; he is an eloquent exponent of African awareness and values: of African humanism, of generosity, and plain, heroic magnitude of mind.”