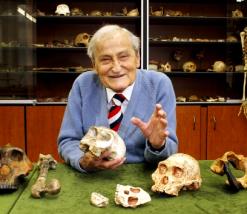 Emeritus Professor Phillip V Tobias, an acclaimed South African anthropologist, with a collection of fossil hominid skulls from east and southern Africa at the Fossil Laboratory of the University of the Witwatersrand. The skull and jawbone of the Taung Child, a famous specimen of Australopithecus africanus, are directly in front of him.
(Image: MediaClubSouthAfrica.com. For more images, visit the image library)

One of South Africa’s most distinguished scientists, Phillip Valentine Tobias, passed away on 7 June after a long illness.

Tobias, professor emeritus of anatomy and human biology, and a respected palaeontologist at Wits University, was 86.

“We extend our deepest sympathies to the friends and family of Professor Tobias, and those who knew him well,” the university said in a statement.

President Jacob Zuma added his condolences, saying: “We have lost a renowned scientist, a scholar and a unique human being. Our country remains eternally proud of his work. On behalf of government and the people of South Africa, we extend our deepest condolences and may his soul rest in peace.”

Tobias was born in Durban 1925, and was acknowledged worldwide as an expert in anatomy, human biology and evolution as well as the analysis of human fossils. He received as many as 18 honorary degrees from around the globe over the course of his career.

Accolades awarded Tobias over the years range from the Order of Meritorious Service (gold class) and the Order of the Southern Cross of South Africa, to the Fellow of the Royal Society of London and the Charles Darwin Lifetime Achievement Award. The City of Johannesburg awarded him the Walter Sisulu Special Contribution Award in 2007.

“I like to think that I have had a moderately good impact on some of them [his students], and bless them, they’re always telling me this when I meet them in Edmonton in Canada, Sydney, Nairobi, Hong Kong, New York and Cambridge,” Tobias said in a 2009 interview with the City of Johannesburg.

He said at the time that what made him tick was his love of people and humanity.

“I was one of those strange professors who loved his students. By being available to them at all times to help them with their problems and with constructive, creative advice and trying to widen their horizons.”

Although frail, up until recently, he drove himself to work on most days, where he had an office at the Wits Medical School. He was still active, answering emails, seeing visitors from all over the world, writing speeches and chapters or forewords for books, and seeing students who sought his advice.

His personal assistant, Felicity Krowitz said in 2009: “He goes out of his way to assist anyone with anything. He is so sprightly, so on-the-ball intellectually. His memory is unbelievable.”

Tobias had been at Wits for over 60 years – he graduated from the university in 1950. He had simultaneously been professor at the university in the fields of anatomy, palaeonanthropology and zoology. His other work included being dean, emeritus professor, honorary professorial research fellow and director of the Sterkfontein Research Unit.

In his time at the university, he served as professor of anatomy and human biology and served as head of these departments until 1990.

From 1980 to 1982 he served as dean of the faculty of medicine, and was honorary professor of palaeoanthropology and zoology.

In 1994 he was made professor emeritus of anatomy and human biology and honorary professorial research fellow in anatomical sciences. All of these positions he held until his death.

Tobias had also served as visiting professor at the universities of Pennsylvania, Florence, Cornell and Vienna, among others.

In 2005 he published the first part of his autobiography, Into the Past, a memoir. He was working on the second part when he died.

His has written biographies of anthropologists and books on the philosophy and history of science, all the while being nominated for a Nobel Prize three times.

Tobias had supervised excavations at Sterkfontein for the past 46 years, since 1966, where over 600 fossil hominids have been recovered, and where over a third of all known early hominid fossils have been found.

His other excavations were at other major fossil sites like Taung in the North West province, Makapansgat in Limpopo, and sites in Tanzania and Kenya.

“Tobias made the Wits’ department of anatomy (as it was then called) a major world centre of palaeoanthropological research and teaching,” said Prof Beverley Kramer.

Kramer is the professor of anatomy at the school of anatomical sciences at the university. She was speaking at the opening of an exhibition on Tobias at the Adler Museum of Medicine, in May 2008.

“Phillip brought great acclaim, not only to the department, but also to the faculty of health sciences and to his university.”

Wits added to its statement by saying Tobias was internationally renowned for his scholarship and dedication to a better understanding of the origin, behaviour and survival of humanity.

“For his many major scholarly contributions to palaeoanthropology, anatomy, human biology, cultural anthropology, the evolution of the brain, cytogenetics and the history and philosophy of science.”

Over the years Tobias had been offered posts around the world, but he always turned them down, happy to stay at his alma mater, from which he obtained five degrees.

“Unlike many of his contemporaries who left South Africa in the 1950s, Phillip stayed on and committed himself to maintaining high standards of scholarship and personal integrity during the difficult years,” said Nobel laureate Sydney Brenner, in the foreword to Into the Past, a memoir.

Tobias opposed the injustices of apartheid, both as a student and as a lecturer at Wits. He was president of the non-racial National Union of South African Students, which opposed segregated education. He also participated in protests against the Group Areas Act, the Suppression of Communism Act, the Population Registration Act and other oppressive laws.

Together with his colleagues, he complained to the South African Medical Council regarding the treatment of Steve Biko, who died in police custody in 1977.

“Tobias was renowned for his sustained campaign against racism and for upholding and fighting for human rights and freedoms,” said the university’s statement.

“In recent years he publicly protested against xenophobia, government’s initial HIV/Aids policies and its delay in granting the Dalai Lama a visa to enter South Africa.”

He loved reading whodunits, with his favourite authors being PD James, Agatha Christie, Ngaio Marsh, Dorothy Allingham and Kathy Reichs. Classical music was his genre of choice, especially choral music. He used to go to his home town of Durban twice a year for his holidays, enjoying relaxing at the sea.

“People, conversation, chocolates and watching the waves at the seashore,” was how Tobias described his holidays in 2009.