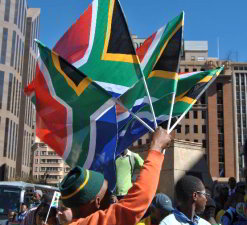 South Africa moved up one spot to 36th out of 50 countries measured in the latest release of the prestigious Anholt-GfK Roper Nation Brand Index, confirming the steady improvement in the country’s brand reputation.

The index is based on an annual online survey conducted among respondents from 20 “panel” countries in which the 50 competing nations are ranked along six dimensions: tourism, culture, people, exports, governance, and investment/immigration.  This information is presented in the form of a hexagon.

South Africa was one of six countries surveyed in the Africa/Middle East region. The others were Egypt; Iran; Nigeria; Saudi Arabia; and the United Arab Emirates.

Both these changes, Matola noted, were the result of “defining moments” for the countries concerned: Barack Obama’s election as the first African-American president in US history moved the country up six positions in 2009, while post-revolution volatility brought Egypt down six positions in 2011.

“Moving up gradually in the rankings is a sign of sustainability, and to do this while the world is in turmoil is a positive sign,” Matola said.

There was also a subtle shift in this year’s index which boded well for the future, Matola added: a generational analysis showed traditional leaders and Western powers faring worse among the younger generation than their peers.

There was a corresponding shift in favourability towards the new emerging powers among the younger generation of survey respondents – representing future tourists, investors and consumers.

South Africa, too, showed a marginally higher positivity among the younger generation. Simon Anholt, the man behind the nation brand index, said that this “can only be good news for South Africa, suggesting that it now has somewhat more in common with the ‘rising stars’ of the developing world than with the fading heroes of the post-industrial economies.”

Matola also noted that while South Africa did not progress beyond the quarterfinals of the 2011 Rugby World Cup, its reputation for sporting excellence had helped lift its culture ranking to 16th position.

For Brand South Africa, this meant continuing to focus on positioning the country more as a business destination and an attractive emerging market on the African continent.

In this regard, productivity played a vital role, Matola said, as it was a core factor in driving economic growth.

Thus, while the Anholt index showed a drop of two places in South Africa’s governance ranking, due to of a perceived “cooling” towards this aspect among South Africans themselves, the Ibrahim Index of African Governance, also published this week, showed South Africa holding steady at fifth place out of 53 countries.

“The lesson is that nation brand building takes time, and holding steady or possibly gradually edging upwards in an index is the sustainable way forward,” Matola said.

Fieldwork for the 2011 Anholt-GfK Roper Nation Brand Index was conducted in July.