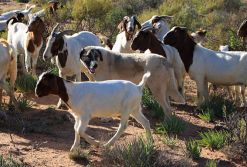 Anatolian dogs are constantly on the lookout for predators threatening the herd of goats.

Puppies are put into the pen with lambs when they are six to eight weeks old.
(Images: Elanza van Lente)

For centuries, in cultures as diverse as Laplanders and Aborigines, dogs have been man’s best friend. They have been companions, hunters and guards, and in many cultures have even played an important spiritual role. Now they have become cheetah’s best friends, too.

Anatolian shepherd dogs, bred in Turkey for 6 000 years, have been imported to South Africa where they are being used to protect livestock and cattle. In the process, they protect cheetahs, which would normally prey on the livestock. When cheetahs take their livestock, farmers respond by shooting the cheetah, or laying snares for them, which then trap smaller predators like caracal and jackal.

Cheetahs are endangered. According to Cheetah Outreach, at the turn of the 20th century, there were an estimated 100 000 cheetahs in Africa, the Middle East and Central Asia. Today there are just 7 500 cheetahs left and in South Africa there are fewer than 1 000.

Anatolian dogs were first introduced to southern Africa in 1994, when farmers in Namibia started using them. Based on this success, a trial programme was launched by De Wildt’s Wild Cheetah Management Project and Cheetah Outreach, in 2005. Since 2008, Sanparks –South African National Parks – has run its own breeding programme in the Namaqua National Park. “The purpose of the project is to breed and train Anatolian shepherd dogs and to provide them at an affordable price to farmers who cannot afford to pay the full market price for the dog. This is in an effort to protect both the farmers’ livestock and the wildlife in the vicinity,” it says.

Anatolian dogs can now be found across all nine provinces. Outside Turkey, they are used as guard dogs in the US, UK, Australia, Canada, and Botswana. They are mostly used to guard sheep and goats, but recently they have been used successfully to guard cattle, and also wild game. With their introduction, farmers have stopped laying traps, which has meant that, besides cheetah, other animals like aardwolf, genet, fox, honey badger and tortoise have not been caught in snares either, so being saved a slow and painful death.

Protection from bears and wolves

In Turkey, Anatolian shepherd dogs were originally bred to protect livestock from bears and wolves. They were bred to withstand harsh conditions – extreme heat and extreme cold, in dry, arid areas of Central Anatolia, conditions not unlike those found in South Africa. It’s believed that they were even used during times of war to dismount enemy riders from their horses.

The dogs are tough and hardy – they stand about 90cm at the shoulder, and weigh up to 75kg, though the females are slightly smaller and lighter. They have a medium-length, tan- or beige-coloured coat, which allows for cooling but maintains warmth in winter. They have good eyesight, sharp hearing, and an excellent sense of smell. They are calm and confident, intelligent and independent, and will stay with the herd in times of danger, or when a sheep or goat is in distress.

They can run at 75km/h, and have a loud bark, which is their first means of defence, followed by attack if sufficiently provoked. Like predators, they will latch on to the throat, killing the predator. But crucially, they will not chase predators over long distances, leaving the herd unguarded. Their size and loud bark are usually enough to chase away most potential threats.

An animal’s training as a guard dog begins when it is a puppy of six to eight weeks. The puppy is placed in an enclosure within the pen of the sheep or goats initially. It is taught not to play with the lambs or to hunt, and soon is taken for short walks with the herd, accompanied by the farmer or handler, says Elanza van Lente, the project manager of the Namaqua Dog Project in Northern Cape.

“Each day they go further, rest, then catch up with the herd,” she explains. They are walked along the fences, allowing them to get a sense of their boundaries. Van Lente says they mark their area with urine, and demarcate two areas: A is an area close to the herd; and B is a bigger area. If a predator comes within B the dog will bark and chase it; if it enters the smaller A area, the dog will attack and kill a caracal or jackal. She says it will take on a leopard but it will probably not survive.

“Normally, a farmer would lose 30 to 40 lambs a year, but now he loses nothing,” she adds. Although the Anatolian dogs have mostly been used for goats and sheep, they are now beginning to be used for cattle too. Van Lente says that she has trained and placed 49 dogs. She has three breeding pairs, plus another female. All dogs that are placed with farmers are sterilised at six months.

An untrained dog from Sanparks costs about R1 000 (US$97), but up to R6 000 ($580) on the open market. Van Lente and her team will give the farmer training, providing a manual, and be on call throughout the day and night if a problem arises. Training can take between three and nine months. “The dogs are very clever, and operate best in grassland, mountain areas and open spaces.” She has a long waiting list for dogs.

Once trained, the dogs are happy out on their own. They will bring the herd home at the time they were trained to, but if they stay overnight in the veld, it is usually because there is a problem. The farmer will be alerted and will be prompted to search for the herd and dog. The dog will never leave an injured goat or sheep on its own – it will keep the whole herd in the veld until the farmer comes looking for them.

There are some remarkable stories of dogs’ devotion to their herds. A dog called Beska was in a fight with a caracal and was badly injured, but still managed to bring its herd safely home. Crickey was attacked by a leopard and sustained serious injuries, but it didn’t lose a single animal in its herd. On its return from the vet, Crickey was kept indoors to recover, but broke out on the first night, and walked 14km to its herd in the veld.

One night Boleyn did not return with its herd, only coming in later with a goat and a newborn kid. The dog had carried the kid back to the farmhouse. Its herd repaid Boleyn’s good deed some time later. It managed to get a snare wrapped around its neck and was unable to move. The farmer spent a day looking for Boleyn when it didn’t return with the herd. He came upon the herd huddling around it, protecting it and saving its life.

Uthaya had an old and sickly ewe in its herd. One very hot day the herder noticed the dog gently taking the ewe by the back of its neck and dragging it from the heat into the shade. “Anatolians possess the three main behaviour traits that an effective livestock guarding dog must have: trustworthiness, attentiveness and protectiveness,” says De Wildt.

Van Lente adds that the dogs make good pets too. They will be protective, but can be aggressive if the owner is not on the property, as their natural guarding instincts kick in, much like Rottweilers or Dobermans.