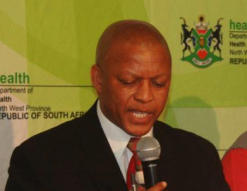 Dr Magome Masike, the province’s MEC for health, says that the North West is going all out to bring down maternal and infant mortality rates.
(Image: NW Department of Health) 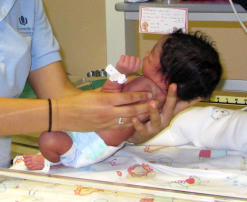 This South African infant is in good hands, but many others have no access to health care just before, during and after birth.
(Image: UConn School of Nursing Study Abroad)

The North West province has stepped in to curb maternal and infant mortality, and ensure that pregnant women safely deliver their babies at health care facilities, thanks to the establishment of maternity waiting homes and a new fleet of 10 dedicated obstetric ambulances.

“In our province we have established that there are women who have been giving birth outside health facilities or in transit to the health facility,” said Tebogo Lekgethwane, spokesperson for the North West Health Department.

“This has had negative impact on maternal and infant mortality because by giving birth outside a health facility without nurses in attendance, a pregnant mother and the infant are exposed to risks and complications which would have been immediately attended to if they were in a facility.”

During a speech in Mmabatho on 22 May, where he explained the breakdown of the department’s R7.6-billion (US$760 000) budget, North West Health MEC Dr Magome Masike explained that the provincial department established maternity waiting homes and bought obstetric ambulances for the exclusive transport needs of pregnant women.

He mentioned that 13 maternity waiting homes were established and that 10 were functional across the four municipal districts in the province. Seven were located in the Dr Ruth Segomotsi Mompati district munipality – a “largely rural” area – three in Bojanala, two in Ngaka Modiri Molema and one in Dr Kenneth Kaunda.

Masike also noted that three more milk banks had been established at the Job Shimankane Tabane, Joe Morolong and Mafikeng provincial hospitals, in addition to the one at Potchefstroom hospital.

“Maternity waiting homes will allow women to be nearer to health facilities in the last two weeks towards delivery due date,” Lekgethwane explained. “Obstetric ambulances will immediately be accessible to pregnant mothers at the time of emergency and this will improve the response time because they will only respond to maternity cases.”

The special obstetric ambulances differ from other ambulances, Lekgethwane said, in that they will be converted to meet the specific demands of a pregnant mother – so they will carry equipment needed in case a mother gives birth in transit. The team will include a midwife to ensure the safe delivery of the child, should this happen in transit or at home.

According to a report released in 2011 by Human Rights Watch, titled Stop Making Excuses: Accountability for Maternal Health Care in South Africa, the UN estimated that 4 500 women die each year in South Africa because of preventable and treatable pregnancy and childbirth-related causes.

This report was based on field research between August 2010 and April 2011 with maternity patients, families, community caregivers, health and human rights experts, health workers, government officials, and representatives of donor and international agencies.

According to the North West’s MEC for finance, Paul Sebegoe, the provincial economy is driven mainly by the mining, agriculture and tourism sectors, and is expected to grow by around 2% on average in 2013.

“We cannot afford to deny the masses of our people their right to dignity and decent life, and infrastructure development remains key towards unlocking development opportunities for the people of this province,” he said. “If we do not succeed we would have failed all of us.”

The North West provincial population contributed 7.2% to the total population in 1996; 6.7% in 2001 and 6.3% in 2007.The recently published census data by Statistics South Africa indicated that the province has a population of 3.5-million, resulting in a slight increase in national population share to 6.8% in 2011.

This is attributed to various factors such as migration, increased birth rate and increased life expectancy.